Acer macrophyllum, the bigleaf maple[2] or Oregon maple,[3] is a large deciduous tree in the genus Acer.

It is native to western North America, mostly near the Pacific coast, from southernmost Alaska to southern California. Some stands are also found inland in the foothills of the Sierra Nevada mountains of central California, and a tiny population occurs in central Idaho.[2][4][5] 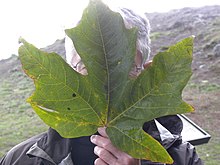 The bigleaf maple has the largest leaves of any maple, typically 15–30 centimetres (6–12 inches) across with five deeply incised palmate lobes, with the largest running to 61 cm (24 in).[10][11] The stems are 15–30 cm (6–12 in) long and contain milky sap.[8] In autumn, the leaves turn gold and yellow, contrasting against backdrops of evergreen conifers. In spring, the tree produces flowers in pendulous racemes 10–15 cm (4–6 in) long, greenish-yellow with inconspicuous petals. It is hermaphroditic, bearing both male and female flowers in each raceme. The flowers appear in early spring, before the leaves.[12] The fruit is a paired winged samara, each seed 1–1.5 cm (3⁄8–5⁄8 in) in diameter with a 4–5 cm (1+5⁄8–2 in) wing.[4][11][10] Bigleaf maple begins bearing seed at about ten years of age.[12]

In May 2018 the oldest two Oregon maples in Europe, 175 years old, were removed from Trinity College Dublin (TCD), Ireland. The first had an interior which was beginning to rot, and it fell after inclement windy weather. The second, also infected, was cut down as the same fate was expected. Both were in the adjoining grassy area which was originally the cemetery of All Hallows and is now the Front Square of TCD.[13]

The fallen leaves, blossoms, and seeds are concentrated with potassium, calcium, and other nutrients.[8]

Bigleaf maple can be found west of British Columbia's Coast Ranges and the Cascade Range, from Vancouver Island to California. It usually grows from sea level to elevations of 450 m (1,480 ft), and more exceptionally 1,200 m (3,900 ft).[8] It can form pure stands on moist soils in proximity to streams, but are generally found within riparian hardwood forests or dispersed, (under or within), relatively open canopies of conifers, mixed evergreens, or oaks (Quercus spp.)[14][5] In cool and moist temperate mixed woods they are one of the dominant species.[15] It is very rare north of Vancouver Island though cultivated in Prince Rupert,[16] near Ketchikan, and in Juneau.[17]

The tree can live in a wide range of habitats, but thrives in fairly well-hydrated hardwood forests, occurring with red alder, black cottonwood, and willows. It is fairly shade tolerant, but not as much so as vine maple, and benefits from disturbances.[8] It is not considered to be fire-resistant due to its thin bark, but large trees with thick bark may survive moderate fires. Along with red alder, bigleaf maple often dominates early postfire succession in Douglas-fir forests, and fire can increase its forest presence.[18] It spreads and grows vegetatively from cuttings and stumps of any size in a prolific manner.[12]

Insects fertilize the tree's flowers.[8] The winged fruits are eaten by squirrels, and by grosbeaks in the winter.[19] Deer mice have been observed consuming bigleaf maple seeds in the spring in the Sierra Nevada. The foliage is browsed by ungulates such as black-tailed deer, mule deer, elk, and horses, as well as by mountain beavers and other rodents.[20][21] A western Oregon study found that 60% of bigleaf maple seedlings over 25 cm (10 in) tall had been browsed by deer, most several times.[22]

Bigleaf maple is preferred as habitat by the barred owl, and the presence of the tree is positively associated with Hammond's flycatchers.[20]

In the more humid parts of its range, such as in the Olympic National Park, the bark is covered with epiphytes such as club moss and licorice fern.[12]

Native Americans grew sprouts from the seeds for consumption, wove baskets from the inner bark, and used the leaves to cover food in cooking pits. They also carved the wood into dishes, utensils, and canoe paddles.[8][26]

Maple syrup has been made from the sap of bigleaf maple trees.[27] While the sugar concentration is about the same as in Acer saccharum (sugar maple), the flavor is somewhat different. Interest in commercially producing syrup from bigleaf maple sap has been limited.[28] Although not traditionally used for syrup production, it takes about 40 volumes of sap to produce 1 volume of maple syrup.

The bigleaf maple is the only commercially important maple of the Pacific Coast region.[14]

The wood is primarily used in veneer production for furniture, but is also used in musical instrument production (including piano frames), interior paneling, and other hardwood products; the heartwood is light reddish-brown, fine-grained, moderately heavy, and fairly robust.[8]

In California, land managers do not highly value bigleaf maples, and they are often intentionally knocked over and left un-harvested during harvests for Douglas fir and redwood stands.[29]