Overview of agriculture in California

Agriculture is a significant sector in California's economy, producing nearly $50 billion in revenue in 2018. There are more than 400 commodity crops grown across California, including a significant portion of all fruits, vegetables, and nuts for the United States.[1] In 2017, there were 77,100 unique farms and ranches in the state, operating across 25.3 million acres of land. The average farm size was 328 acres, significantly less than the average farm size in the U.S. of 444 acres.[1] 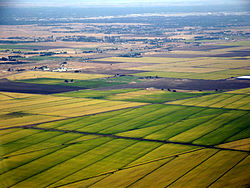 California farms produce 90% of all U.S.-grown avocados, with the great majority being Hass variety.[4] In 2018, the state grew 300 million pounds. Drought and heat can significantly reduce the harvest in some years.[5]

By 2006, California produced the second-largest rice crop in the United States,[10] after Arkansas, with production concentrated in six counties north of Sacramento.[11]

California's production is dominated by short- and medium-grain japonica varieties, including cultivars developed for the local climate such as Calrose, which makes up as much as 85% of the state's crop.[12]

California walnuts account for nearly all the walnuts grown in the United States. In 2017, walnut production was the seventh most valuable agricultural commodity in California, valued at $1.59 billion in cash receipts.[13]

California wine accounts for nearly 90 percent of American wine production. If California were a separate country, it would be the world's fourth largest wine producer.[14]

Its agricultural productivity relies on irrigation both from surface water diversions and from groundwater pumping (wells). About one-sixth of the irrigated land in the U.S. is in the Central Valley.[19] Central Valley groundwater pollution is an ongoing environmental issue in the area.

The Salinas Valley, located within Monterey County, is one of the most productive agricultural regions in California. Monterey County grows over 50% of the national production for leaf lettuce, head lettuce, and celery. It also produces significant percentages of the country's broccoli, spinach, cauliflower, and strawberries.[22] The area is also a significant producer of organic produce, with 68,868 acres in cultivation and annual sales of $412,347,000. 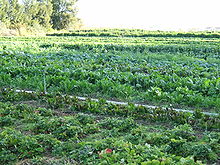 California has more certified organic farms than any other state. In 2016, more than a million acres in the state were certified organic.[23] CA grows 90% or more of the U.S. production of Organic almonds, artichokes, avocados, broccoli, cauliflower, celery, dates, figs, grapes, strawberries, lemons, lettuce, plums, and walnuts.[24]

There are two primary laws that regulate organic production: at a federal level, the Organic Foods Production Act of 1990 and at a state level, the California Organic Food and Farming Act of 2016. Both laws lay out standards for production, processing, handling and retailing that must be followed in order to label a product as "organic". The USDA, California Organic Products Advisory Committee, and the California County Agricultural Commissioners monitor and ensure these standards are followed by administering enforcement actions for any violations.[25]

Any agricultural operation selling more than $5,000 in products per year is required to acquire organic certification, if they seek to sell their products under the organic label. Multiple organizations are accredited to certify operations organic.[26]

Water for agriculture comes from two primary sources: surface water and groundwater. Surface waters include natural lakes, rivers, and streams, as well as large network of human-built reservoirs and a complex distribution system of aqueducts and canals that carry water from the location of the source to the agricultural users.[28] Groundwater aquifers range in depth and accessibility across the state, and historically have been used to supplement surface water supplies in dry years.[29]

Agricultural impacts on water quality concentrate around concerns of the following contaminants: nutrients, pesticides, salts, pollutants, sediment, pathogens, and heavy metals.[31] These contaminants enter water bodies through above-ground surface runoff of rainwater or excess irrigation water, or percolating through the soil and leaching into groundwater.  Water quality concerns affect most regions of the state and tend to be exacerbated during periods of drought.[32]

At present, all irrigated agricultural operations in the State are required to participate in the Irrigated Lands Regulatory Program.[33] The regulatory program began after the California Legislature passed Senate Bill 390 (SB390) in 1990, that eliminated a blanket waiver for agricultural operations to discharge wastewater without any specific environmental standards.[34]

Prior to the arrival of Europeans, the Indigenous peoples of California, with diverse societies mainly reliant on hunter-gatherer methods, practiced seed collection and forest gardening. Some California hunter-gatherer tribes, including the Owens Valley Paiute, developed irrigation.[35]

In the late 1700s, Franciscan missionaries established Spanish missions in California. Like earlier Spanish missions established in Baja California, these missions were surrounded by agricultural land, growing crops from Europe and the Americas, and raising animals originating from Europe. Indigenous workers from Baja California made up a large part of the initial labor force on California missions.[36] In the early 1800s, this flow of laborers from Baja California had largely stopped, and the missions relied on converts from local tribes. By 1806, over 20,000 Mission Indians were "attached" to the California missions. As missions were expected to become largely self-sufficient, farming was a critically important Mission industry. George Vancouver visited Mission San Buenaventura in 1793 and noted the wide variety of crops grown: apples, pears, plums, figs, oranges, grapes, peaches, pomegranates, plantain, banana, coconut, sugar cane, indigo, various herbs, and prickly pear.[37] Livestock was raised for meat, wool, leather, and tallow, and for cultivating the land. In 1832, at the height of their prosperity, the missions collectively owned over 150,000 cattle and over 120,000 sheep. They also raised horses, goats, and pigs.[38]

While the Spanish were the most successful farmers active in California in the early 1800s, they were not the only ones. In 1812, the Russians established Fort Ross in what is now Sonoma County, California, and intended the fort in part as an agricultural supply point for other Russian activity on the west coast. Despite Russian plans for the colony, agriculture at Fort Ross had low yields, significantly lower than the California missions. Inefficient farming methods, labour shortages, coastal fog, and rodents all contributed to limit agriculture at the fort.[39]

The Spanish (1784–1810) and Mexican (1819–1846) governments made a large number of land grants to private individuals from 1785 to 1846. These ranchos included land taken from the missions following government-imposed secularization in 1833, after which the missions' productivity declined significantly. The ranchos were focused on cattle, and hides and tallow were their main products. There was no market for large quantities of beef (before refrigeration and railroads) until the California Gold Rush.

In 1848, before the Gold Rush, the population of CA was approximately 15,000, not counting Native Americans. By 1852, there were over 250,000 people in the state.[40] and by 1870, 560,000 people.[41] This rapid population growth drove an increase in importation of agricultural products, and, within a few years, a massive growth in in-state agriculture. In the first years of the gold rush, the state relied on agricultural imports arriving by ship, from Australia, Chile, and Hawaii. During these years, there was rapid growth in vegetable farming for local markets. This was followed by an expansion of grain farming.[40] A shift in the economic dominance of grain farming over cattle raising was marked by the passage of the California "No-Fence Law" of 1874. This repealed the Trespass Act of 1850, which had required farmers to protect their planted fields from free-ranging cattle. The repeal of the Trespass Act required that ranchers fence stock in, rather than farmers fencing cattle out. The ranchers were faced with either the high expense of fencing large grazing tracts or selling their cattle at ruinous prices.[42][43] By the 1890s, California was 2nd in US wheat production, producing over one million tons of wheat per year,[40] but monocrop wheat farming had depleted the soil in some areas resulting in reduced crops.[44]

Irrigation was almost nonexistent in California in 1850, but by 1899, 12 percent of the state's improved farmland was irrigated.[44]

Luther Burbank moved to Santa Rosa, California in 1875, and developed numerous commercially successful varieties of plants over the next 50 years.

In 1905, the California legislature passed the University Farm Bill, which called for the establishment of a farm school for the University of California (at the time, Berkeley was the sole campus of the university).[45] The commission took a year to select a site for the campus, a tiny town then known as Davisville.[45] UC Davis opened its doors as the "University Farm" to 40 degree students (all male) from UC Berkeley in January 1909.

In 1919, the California Department of Food and Agriculture was established. The department covers state food safety, state protection from invasive species, and promoting the state's agricultural industry.

The Dust Bowl of the 1930s drove many people from the American prairie, and a significant number of these economic migrants relocated to California. Poor migrants from Oklahoma and nearby states were sometimes referred to as Okies, generally a pejorative term. In 1933, the state saw a number of agricultural labor strikes, with the largest actions against cotton growers. Cherry, grape, peach, pear, sugar beet, and tomato workers were also involved.

In 1965, the Williamson Act became law, providing property tax relief to owners of California farmland and open-space land in exchange for agreement that the land will not be developed.

The 1960s and 1970s saw major farm worker strikes including the 1965 Delano grape strike and the 1970 Salad Bowl strike. In 1975, the California Agricultural Labor Relations Act of 1975 was enacted,[46] establishing the right to collective bargaining for farmworkers in California, a first in U.S. history.[47] Individuals with prominent roles in farm worker organizing in this period include Cesar Chavez, Dolores Huerta, Larry Itliong, and Philip Vera Cruz.

California nut crimes have involved the theft of millions of dollars of nuts (almonds, pistachios, cashews and pecans) in multiple incidents since 2013.[49][50]

Water theft for agriculture has been an issue in times of drought, with the State assessing fines up to $1.5 Million.[51][52]