Participants of the 13th Congress of the AOU 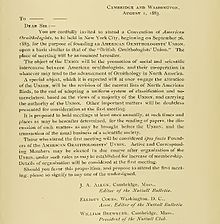 The American Ornithologists' Union was founded in 1883. Three members of the Nuttall Ornithological Club, Elliott Coues, J. A. Allen, and William Brewster, sent letters to 48 prominent ornithologists inviting them "to attend a Convention of American Ornithologists, to be held in New York City, beginning on September 26, 1883, for the purpose of founding an American Ornithologists' Union, upon a basis similar to that of the "British Ornithologists' Union." The addressees were selected mainly because of their "scientific standing, but somewhat with regard to geographical representation, it being desirable to make the gathering as catholic and non-sectional as possible." Twenty-five responded to the letter and 21 were present at the first meeting.[4] The founding convention was held in the library of the American Museum of Natural History on September 26, 1883. Founding members of the AOU include those present at the inaugural convention, listed below. In addition, the members of the new Union unanimously enrolled two others as founding members: Professor S. Baird, who was unable to attend due to his duties at the Smithsonian, and J. A. Allen, who could not attend due to physical disability.[4]

Presidents of the AOU

Past Presidents of the AOU[5]

Regular membership in the AOS is open to any dues paying person with an interest in birds. Student rates are available for full-time students. Student Membership Awards of a no-cost membership are available to qualified undergraduate and graduate students who wish to pursue a career in ornithology.[6] There are three higher classes of membership, Elective Member, Honorary Fellow and Fellow.[7]

Honorary Fellows are limited to 100 and are "chosen for exceptional ornithological eminence and must at the time of their election be residents of a country other than the United States of America or Canada." Nominations for Honorary Fellow are by a special committee appointed by the president or any three Fellows. A vote of the majority of the Fellows present at an annual meeting is required for election. Each Fellow may vote affirmatively for as many as there are vacancies.[7]

Fellows are chosen "for exceptional and sustained contributions to ornithology and/or service to the Union" and must be residents or citizens of the Western Hemisphere when elected. Candidates must be an Honorary Fellow or Elective Member in good standing. A vote of two thirds of the Fellows at an annual meeting is required for election as a Fellow.[7]

A decline in student membership in the AOU and other ornithological societies prompted creation of a Student Affairs Committee in 2003. Several awards for students were created starting in 2005 as well as activities for students at annual meetings.

Much of the AOS's work is accomplished by its thirty-three standing committees. Many of these are common for any organization such as Bylaws, History and Membership. Other committees are of special importance to ornithology.[15]