Plant that has adapted to living in an aquatic environment 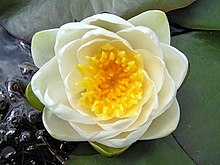 The flower of Nymphaea alba, a species of water lily 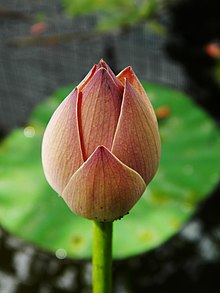 Aquatic plants are plants that have adapted to living in aquatic environments (saltwater or freshwater). They are also referred to as hydrophytes or macrophytes to distinguish them from algae and other microphytes. A macrophyte is a plant that grows in or near water and is either emergent, submergent, or floating. In lakes and rivers macrophytes provide cover for fish, substrate for aquatic invertebrates, produce oxygen, and act as food for some fish and wildlife.[1]

Macrophytes are primary producers and are the basis of the food web for many organisms.[2] They have a significant effect on soil chemistry and light levels [3] as they slow down the flow of water and capture pollutants and trap sediments. Excess sediment will settle into the benthos aided by the reduction of flow rates caused by the presence of plant stems, leaves and roots. Some plants have the capability of absorbing pollutants into their tissue.[4][5] Seaweeds are multicellular marine algae and, although their ecological impact is similar to other larger water plants, they are not typically referred to as macrophytes.[5]

Aquatic plants require special adaptations for living submerged in water, or at the water's surface. The most common adaptation is the presence of lightweight internal packing cells, aerenchyma, but floating leaves and finely dissected leaves are also common.[6][7][8] Aquatic plants can only grow in water or in soil that is frequently saturated with water. They are therefore a common component of wetlands.[9] One of the largest aquatic plants in the world is the Amazon water lily; one of the smallest is the minute duckweed. Many small aquatic animals use plants such as duckweed for a home, or for protection from predators. Some other familiar examples of aquatic plants might include floating heart, water lily, lotus, and water hyacinth.

Historically, aquatic plants have been less studied than terrestrial plants.[10]

The principal factor controlling the distribution of aquatic plants is the availability of water. However, other factors may also control their distribution including nutrient availability, disturbance from waves, grazing, and salinity.[9] Some aquatic plants, especially macro-algae, are able to thrive in brackish, saline, and salt water.[6]

Aquatic plants have adapted to live in either freshwater or saltwater. Aquatic vascular plants have originated on multiple occasions in different plant families;[6][11] they can be ferns or angiosperms (including both monocots and dicots). The only angiosperms capable of growing completely submerged in seawater are the seagrasses.[12] Examples are found in genera such as Thalassia and Zostera. An aquatic origin of angiosperms is supported by the evidence that several of the earliest known fossil angiosperms were aquatic. Aquatic plants are phylogenetically well dispersed across the angiosperms, with at least 50 independent origins, although they comprise less than 2% of the angiosperm species.[13] Archaefructus represents one of the oldest, most complete angiosperm fossils which is around 125 million years old.[14] These plants require special adaptations for living submerged in water or floating at the surface.[14]

Although most aquatic angiosperms can reproduce by flowering and setting seeds, many have also evolved to have extensive asexual reproduction by means of rhizomes, turions, and fragments in general.[7]

Submerged aquatic plants have more restricted access to carbon as carbon dioxide compared to terrestrial plants. They may also experience reduced light levels.[15] The diffuse boundary layers (DBLs) around submerged leaves and photosynthetic stems. Aquatic plants have DBLs that vary based on the leaves' thickness, shape and density and they are the main factor responsible for the greatly reduced rate of gaseous transport across the leaf/water boundary and therefore greatly inhibit transport of carbon dioxide transport.[15] To overcome this limitation, many aquatic plants have evolved to metablise bicaronate ios as a source of carbon.[15]

Environmental variables affect the instantaneous photosynthetic rates of aquatic plants and the photosynthetic enzymes pigments.[16] In water, light intensity rapidly decreases with depth. . Respiration is also higher in the dark per the unit volume of the medium they live in.[16]

Fully submerged aquatic plants have little need for stiff or woody tissue as they are able to maintain their position in the water using buoyancy typically from gas filled lacunaa or turgid Aerenchyma cells.[17] When removed from the water, such plants are typically limp and loose turgor rapidly.[18]

Those living in rivers do, however, need sufficient structural xylem to avoid being damaged by fast flowing water and they also need strong mechanisms of attachment to avoid being uprooted by river flow.

In floating aquatic angiosperms, the leaves have evolved to only have stomata on the top surface to make use of atmospheric carbon dioxide.[19] Gas exchange primarily occurs through the top surface of the leaf due to the position of the stomata, and the stomata are in a permanently open state. Due to their aquatic surroundings, the plants are not at risk of losing water through the stomata and therefore face no risk of dehydration.[19] For carbon fixation, some aquatic angiosperms are able to uptake CO2 from bicarbonate in the water, a trait that does not exist in terrestrial plants.[15] Angiosperms that use HCO
3- can keep CO2 levels satisfactory, even in basic environments with low carbon levels.[15]

Due to their environment, aquatic plants experience buoyancy which counteracts their weight.[20] Because of this, their cell covering are far more flexible and soft, due to a lack of pressure that terrestrial plants experience.[20] Green algae are also known to have extremely thin cell walls due to their aquatic surroundings, and research has shown that green algae is the closest ancestor to living terrestrial and aquatic plants.[21] Terrestrial plants have rigid cell walls meant for withstanding harsh weather, as well as keeping the plant upright as the plant resists gravity. Gravitropism, along with phototropism and hydrotropism, are traits believed to have evolved during the transition from an aquatic to terrestrial habitat.[22][23] Terrestrial plants no longer had unlimited access to water and had to evolve to search for nutrients in their new surroundings as well as develop cells with new sensory functions, such as statocytes.

Terrestrial plants may undergo physiological changes when submerged due to flooding. When submerged, new leaf growth has been found to have thinner leaves and thinner cell walls than the leaves on the plant that grew while above water, along with oxygen levels being higher in the portion of the plant grown underwater versus the sections that grew in their terrestrial environment.[24] This is considered a form of phenotypic plasticity as the plant, once submerged, experiences changes in morphology better suited to their new aquatic environment.[24] However, while some terrestrial plants may be able to adapt in the short-term to an aquatic habitat, it may not be possible to reproduce underwater, especially if the plant usually relies on terrestrial pollinators.

Based on growth form, macrophytes can be characterised as:

An emergent plant is one which grows in water but pierces the surface so that it is partially exposed to air. Collectively, such plants are emergent vegetation.

This habit may have developed because the leaves can photosynthesize more efficiently in air and competition from submerged plants but often, the main aerial feature is the flower and the related reproductive process. The emergent habit permits pollination by wind or by flying insects.[26]

There are many species of emergent plants, among them, the reed (Phragmites), Cyperus papyrus, Typha species, flowering rush and wild rice species. Some species, such as purple loosestrife, may grow in water as emergent plants but they are capable of flourishing in fens or simply in damp ground.[27]

Submerged macrophytes completely grow under water with roots attached to the substrate (e.g. Myriophyllum spicatum) or without any root system (e.g. Ceratophyllum demersum). Helophytes are plants that grows in a marsh, partly submerged in water, so that it regrows from buds below the water surface.[28] Fringing stands of tall vegetation by water basins and rivers may include helophytes. Examples include stands of Equisetum fluviatile, Glyceria maxima, Hippuris vulgaris, Sagittaria, Carex, Schoenoplectus, Sparganium, Acorus, yellow flag (Iris pseudacorus), Typha and Phragmites australis.[28]

Floating-leaved macrophytes have root systems attached to the substrate or bottom of the body of water and with leaves that float on the water surface. Common floating leaved macrophytes are water lilies (family Nymphaeaceae), pondweeds (family Potamogetonaceae).[29]

Free-floating macrophytes are found suspended on water surface with their root not attached to substrate, sediment, or bottom of the water body. They are easily blown by air and provide breeding ground for mosquitoes. Example include Pistia spp. commonly called water lettuce, water cabbage or Nile cabbage.[29]

The many possible classifications of aquatic plants are based upon morphology.[6] One example has six groups as follows:[30] 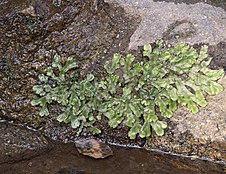 Many liverworts grow either submerged or on land. 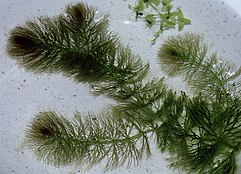 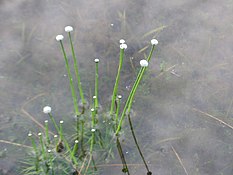 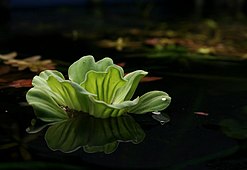 Pistia stratiotes, an example of a neuston, a plant that floats freely on the water surface 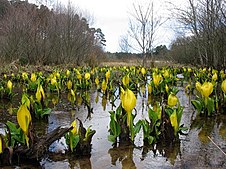 Lysichiton americanus grows rooted in the bottom with leaves and flowers above the waterline. 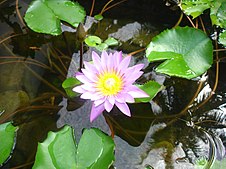 Water lilies grow rooted in the bottom with leaves that float on the water surface.

Functions of macrophytes in aquatic systems

Macrophytes perform many ecosystem functions in aquatic ecosystems and provide services to human society. One of the important functions performed by macrophyte is uptake of dissolve nutrients (N and P) from water.[3] Macrophytes are widely used in constructed wetlands around the world to remove excess N and P from polluted water.[31] Beside direct nutrient uptake, macrophytes indirectly influence nutrient cycling, especially N cycling through influencing the denitrifying bacterial functional groups that are inhabiting on roots and shoots of macrophytes.[32] Macrophytes promote the sedimentation of suspended solids by reducing the current velocities,[33] impede erosion by stabilising soil surfaces.[34] Macrophytes also provide spatial heterogeneity in otherwise unstructured water column. Habitat complexity provided by macrophytes tends to increase diversity and density of both fish and invertebrates.[35]

Uses and importance to humans 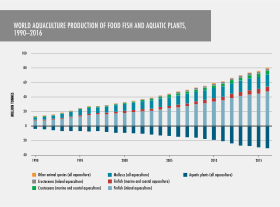 A decline in a macrophyte community may indicate water quality problems and changes in the ecological status of the water body. Such problems may be the result of excessive turbidity, herbicides, or salination. Conversely, overly high nutrient levels may create an overabundance of macrophytes, which may in turn interfere with lake processing.[1] Macrophyte levels are easy to sample, do not require laboratory analysis, and are easily used for calculating simple abundance metrics.[1]

Hot water extracts of the stem and root of Ludwigia adscendens, as well as those of the fruit, leaf and stem of Monochoria hastata were found to have lipoxygenase inhibitory activity. Hot water extract prepared from the leaf of Ludwigia adscendens exhibits alpha-glucosidase inhibitory activity more potent than that of acarbose.[38]

Macrophytes have an essential role in some forms of wastewater treatment, most commonly in small scale sewage treatment using constructed wetlands or in polishing lagoons for larger schemes.[36]

The introduction of non-native aquatic plants has resulted in numerous examples across the world of such plants becoming invasive and frequently dominating the environments into which they have been introduced.[39] Such species include Water hyacinth which is invasive in many tropical and sub-tropical locations including much of the southern US, many Asian countries and Australia. New Zealand stonecrop is a highly invasive plant in temperate climates spreading from a marginal plant to encompassing the whole body of many ponds to the almost total exclusion of other plants and wildlife[40]

Other notable invasive plant species include floating pennywort,[41] Curly leaved pondweed,[40] the fern ally Water fern[40] and Parrot's feather.[42] Many of these invasive plants have been sold as oxygenating plants for aquaria or decorative plants for garden ponds and have then been disposed of into the environment.[40]

The countries with the most recorded alien aquatic plant species were France and Italy with 30 species followed by Germany with 27 species, and Belgium and Hungary with 26 species. [39]

The European and Mediterranean Plant Protection Organization has published recommendations to European nations advocating the restriction or banning of the trade in invasive alien plants. [43]