Arbutus is a genus of 12 accepted species[2] of flowering plants in the family Ericaceae,[3] native to warm temperate regions of the Mediterranean, western Europe, the Canary Islands and North America. The name Arbutus was taken from Latin, where it referred to Arbutus unedo.[4]

Arbutus are small trees or shrubs with red flaking bark and edible red berries.[5] Fruit development is delayed for about five months after pollination, so that flowers appear while the previous year's fruit are ripening.[5] Peak flowering for the genus is in April with peak fruiting in October.[6]

The smooth wood of the tree is mentioned by Theophrastus in his Enquiry into Plants (Historia Plantarum) as formerly being used to make weaving spindles. An article on Arbutus tree cultivation in al-Andalus is brought down in Ibn al-'Awwam's 12th-century agricultural work, Book on Agriculture.[7] 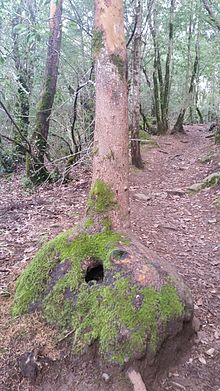 Arbutus menziesii lignotuber near ground level provides fire-resistant storage of energy and sprouting buds if fire damage requires replacement of the trunk or limbs. Note the typically smooth orange bark on the upper portion of the trunk.

Members of the genus are called madrones or madronas in the United States, from the Spanish name madroño (strawberry tree). On the south coast of British Columbia, Canada, where the species is common, arbutus is commonly used or, rarely and locally, "tick tree".[8][9] All refer to the same species, Arbutus menziesii, native to the Pacific Northwest and Northern and Central California regions. It is Canada's only native broadleaved evergreen tree. Some species in the genera Epigaea, Arctostaphylos and Gaultheria were formerly classified in Arbutus. As a result of its past classification, Epigaea repens (mayflower) has an alternative common name of "trailing arbutus".

A study published in 2001 which analyzed ribosomal DNA from Arbutus and related genera suggests that Arbutus is paraphyletic and the Mediterranean Basin species of Arbutus are more closely related to Arctostaphylos, Arctous, Comarostaphylis, Ornithostaphylos and Xylococcus than to the western North American species of Arbutus, and that the split between the two groups of species occurred at the Paleogene/Neogene boundary.[10] The 12 species are as follows:[2]

The bear and the tree at Puerta del Sol, Madrid

Several species are widely cultivated as ornamental plants outside of their natural ranges, though cultivation is often difficult due to their intolerance of root disturbance. The hybrid Arbutus 'Marina' is much more adaptable and thrives under garden conditions.

The Arbutus unedo tree makes up part of the coat of arms (El oso y el madroño, The Bear and the Strawberry Tree) of the city of Madrid, Spain. A statue of a bear eating the fruit of the madroño tree stands in the center of the city (Puerta del Sol). The image appears on city crests, taxi cabs, man-hole covers, and other city infrastructure.

The Arbutus was important to the Straits Salish people of Vancouver Island, who used arbutus bark and leaves to create medicines for colds, stomach problems, and tuberculosis, and as the basis for contraceptives. The tree also figured in myths of the Straits Salish.[16]

The fruit is edible but has minimal flavour and is not widely eaten. In Portugal, the fruit is sometimes distilled (legally or not) into a potent brandy known as medronho. In Madrid, the fruit is distilled into madroño, a sweet, fruity liqueur.

Arbutus is a good fuelwood tree since it burns hot and long. Many Pacific Northwest states in the United States use the wood of A. menziesii primarily as a heat source,[citation needed] as the wood holds no value in the production of homes since it does not grow in straight timbers.

The Canadian songwriter, singer and painter Joni Mitchell (born 1943), includes a reference to the "arbutus rustling" in her song, "For The Roses". It sounded like applause. She calls the arbutus tree her "favorite all-time tree". She had one outside her door in a house she built.

According to the Straits Salish, an anthropomorphic form of pitch would go fishing, but return to shore before it got too hot. One day he was too late getting back to shore and melted from the heat and several anthropomorphic trees rushed to get him – the first was Douglas fir, who took most of the pitch, the grand fir received a small portion, and the madrone received none – which is why they say it still has no pitch.

Also, according to the Great Flood legends of several bands in the northwest, the madrone helped people survive by providing an anchor on top of a mountain. Because of this the Saanich people do not burn madrone out of thanks for saving them.[17]