The Archbishop of Los Angeles also serves as metropolitan bishop of the suffragan dioceses within the Ecclesiastical Province of Los Angeles, which includes the dioceses of Fresno, Monterey, Orange, San Bernardino, and San Diego.

With the papal bull Apostolicam sollicitudinem of 27 April 1840, Pope Gregory XVI set up a new episcopal see, to which he gave the name of Diocese of California (also interchangeably called "Diocese of Two Californias" or "Diocese of Both Californias"). He assigned to it a vast territory taken from that of the Diocese of Sonora, now the Archdiocese of Hermosillo in Mexico. It included Alta California, encompassing the present states of California, Nevada, Arizona, Utah, western Colorado and southwestern Wyoming, and the Baja California Territory, encompassing the modern Mexican states of Baja California and Baja California Sur. He set the episcopal residence at San Diego and made the diocese a suffragan of the Archdiocese of Mexico City.[2] Francisco Garcia Diego y Moreno, OFM became the first bishop of the new diocese, with Mission Santa Barbara serving as its pro-cathedral.

After ceding Alta California to the United States at the close of the Mexican–American War, the government of Mexico objected to a bishop based in the United States having jurisdiction over parishes in Mexican Baja California. The Holy See divided the diocese into American and Mexican sections. On 20 November 1849, with the episcopal residence moved to Monterey, a more central position for the new diocese, the American section became the Diocese of Monterey.[3] The Royal Presidio Chapel in Monterey served as the pro-cathedral of the American diocese.

In 1853, Pope Pius IX erected the Metropolitan Archdiocese of San Francisco, taking the territory that now constitutes Nevada, Utah, and much of northern California from the diocese and making the diocese a suffragan thereof.

In 1859, the same pope renamed of the diocese to Diocese of Monterey-Los Angeles to recognize the growth of the city of Los Angeles. The bishop moved his principal residence to Los Angeles and used the Mission of Santa Barbara as a pro-cathedral until the Cathedral of Saint Vibiana opened in 1876.

On June 1, 1922, Pope Pius XI renamed the diocese again, making it the Diocese of Los Angeles-San Diego, and simultaneously erected a new diocese, named the Diocese of Monterey-Fresno, in what had become northern portion of its territory after the erection of the Archdiocese of San Francisco.[4] This changed the title of Bishop John Joseph Cantwell from Bishop of Monterey-Los Angeles to bishop Los Angeles-San Diego, which then comprised the counties of Imperial, Los Angeles, Orange, Riverside, San Bernardino, San Diego, Santa Barbara, and Ventura.

Pope Paul VI subsequently split each of the three dioceses of the Metropolitan Province of Los Angeles into two.

These actions established the present configuration of the Metropolitan Province of Los Angeles.

In 1986, Roger Mahony designated five geographical administrative pastoral regions, each led by an auxiliary bishop who functions as the region's episcopal vicar. The five regions are:

On July 16, 2007, Cardinal Roger Mahony and the archdiocese reached a record-breaking settlement with 508 alleged victims of sexual abuse by priests. The settlement was worth $660 million, with an average of $1.3 million for each plaintiff. Mahony described the abuse as a "terrible sin and crime", after a series of trials into sex abuse claims since the 1940s were to begin. The agreement settled all outstanding civil lawsuits against the archdiocese and dwarfs the $157 million settlement paid by the Archdiocese of Boston since Massachusetts law places a legal dollar cap on how much money a non-profit group can be required to pay.[12]

In 2014 the diocese agreed to pay $13 million to settle a final group of 17 sex abuse lawsuits, including eleven that involved "a visiting Mexican priest who fled prosecution and remains a fugitive more than 25 years later". The settlement followed a court order forcing the Archdiocese to release files which showed that it had shielded accused priests, for example by ordering church officials not to turn over a list of altar boys to police who were investigating.[13] 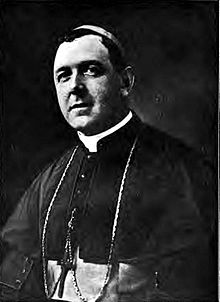 The archdiocese is led by the archbishop, who governs from the mother church, the Cathedral of Our Lady of the Angels. The cathedral was dedicated on September 2, 2002, and replaced the former Cathedral of Saint Vibiana, damaged in the 1994 Northridge earthquake.

The Archbishop of Los Angeles is the metropolitan of the Province of Los Angeles of the Catholic Church. Its suffragans are the dioceses of Fresno, Monterey in California, Orange in California, San Bernardino, and San Diego. Metropolitan archbishops historically wielded great administrative powers over the suffragan dioceses. Today, such power is only ceremonial and kept as a tradition.

The Most Reverend José H. Gómez is the current archbishop of Los Angeles, having automatically succeeded his predecessor, Cardinal Roger Mahony, who served for 25 years, upon the latter's retirement which took effect on March 1, 2011.[18] Previously, Gómez served as Coadjutor Archbishop of Los Angeles since his appointment by Pope Benedict XVI on April 6, 2010.[19][20][21] He previously served as Archbishop of San Antonio from 2004 to 2010, and as an auxiliary bishop of the Archdiocese of Denver from 2001 to 2004.[22] He is an ordained priest of Opus Dei.[23][24] 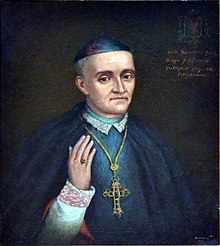 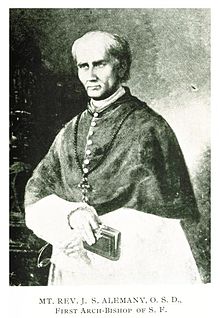 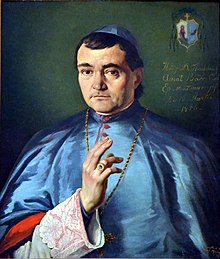 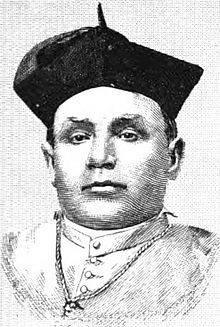 Other priests of the diocese who became bishops

Note: Years in parentheses indicate the time of service as a priest of the Archdiocese of Los Angeles (or predecessor diocese), prior to appointment to the episcopacy.

Main article: List of schools in the Roman Catholic Archdiocese of Los Angeles

There are 5 colleges and over 50 high schools within the Archdiocese of Los Angeles. Many churches have affiliated primary schools as well. 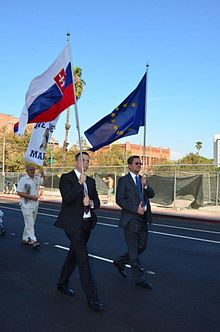 The archdiocese's office of religious education produces the Los Angeles Religious Education Congress, the largest annual event of its kind in the United States, with an attendance of approximately 38,000.

Since 2011 the Queen of Angels Foundation has sponsored the annual Marian processions, Votive Masses, and fiestas in commemoration of Los Angeles' birthday and the feast of Our Lady of the Angels. Archbishop Gomez has been the homilist and principal celebrant of the annual Mass since 2012. Future Marian processions and Masses will coincide with the City of Los Angeles' official birthday celebrations on the last Saturday of August.

As directed by the U.S. Conference of Catholic Bishops' Committee on the Liturgy and the Ecclesiastical Province of Los Angeles, the archdiocese annually observes four holy days of obligation. The Catholic Church currently recognizes 10 holy days, established in the 1917 Code of Canon Law. However, the USCCB has reduced that number to 6 for Latin Church dioceses in the United States. As of January 1993, no provinces in the United States celebrate the solemnities of Epiphany (which transfers to the Sunday after January 1), Corpus Christi (which transfers to the Sunday after Trinity Sunday), Saint Joseph, or the Saints Peter and Paul, Apostles as holy days of obligation.[26] The Metropolitan Province of Los Angeles, which includes the L.A. Archdiocese, further modified the list, and as of 2019, celebrates four holy days of obligation on the days prescribed by canon law. The solemnity of the Ascension is transferred from Thursday of the sixth week of Easter to the seventh Sunday of Easter. The province has abrogated the obligation to attend Mass on the Solemnity of Mary, Mother of God.[27]

The Archdiocese of Los Angeles, being one of the most diverse dioceses in the world, strives for all of their employees to live and work in accord with Catholic social teaching and servant leadership. "The dignity of the human person, the call to community and participation, rights and responsibilities, dignity of work and the rights of workers, and solidarity, are intrinsic to servant leadership."[28] In an attempt to provide better service and to increase transparency the Archdiocese of Los Angeles is the only archdiocese that has a completely updated and searchable administrative handbook available online.[29] 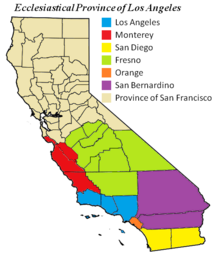 Map of the Ecclesiastical Province of Los Angeles

See: List of the Catholic bishops of the United States