The Atlantic Forest (Portuguese: Mata Atlântica) is a South American forest that extends along the Atlantic coast of Brazil from Rio Grande do Norte state in the northeast to Rio Grande do Sul state in the south and inland as far as Paraguay and the Misiones Province of Argentina, where the region is known as Selva Misionera.

The Atlantic Forest has ecoregions within the following biome categories: seasonal moist and dry broad-leaf tropical forests, tropical and subtropical grasslands, savannas, and shrublands, and mangrove forests. The Atlantic Forest is characterized by a high biodiversity and endemism.[1]

It was the first environment that the Portuguese colonists encountered over 500 years ago, when it was thought to have had an area of 1,000,000–1,500,000 km2 (390,000–580,000 sq mi), and stretching an unknown distance inland, making it, back then, the second largest rainforest on the planet, only behind the Amazon rainforest.[2] Over 85% of the original area has been deforested, threatening many plant and animal species with extinction.[3][4]

The Atlantic Forest is unusual in that it extends as a true tropical rain forest to latitudes as far as 28°S. This is because the trade winds produce precipitation throughout the southern winter. In fact, the northern Zona da Mata of northeastern Brazil receives much more rainfall between May and August than during the southern summer. The geographic range of Atlantic Forest vary depending on author or institution that published them. Information on four most important boundaries as well as their union and intersection was reviewed in 2018.[8]

During glacial periods in the Pleistocene, the Atlantic Forest is known to have shrunk to extremely small fragmented refugia in highly sheltered gullies, being separated by areas of dry forest or semi-deserts known as caatingas.[6] Some maps even suggest the forest actually survived in moist pockets well away from the coastline where its endemic rainforest species mixed with much cooler-climate species. Unlike refugia for equatorial rainforests, the refuges for the Atlantic Forest have never been the product of detailed identification.

Despite having only 28% of native vegetation cover remaining,[10] the Atlantic Forest remains extraordinarily lush in biodiversity and endemic species, many of which are threatened with extinction.[11] Approximately 40 percent of its vascular plants and up to 60 percent of its vertebrates are endemic species, meaning they are found nowhere else in the world.[12] The official threatened species list of Brazil contains over 140 terrestrial mammal species found in Atlantic Forest. In Paraguay there are 35 species listed as threatened, and 22 species are listed as threatened in the interior portion of the Atlantic Forest of Argentina. Nearly 250 species of amphibians, birds, and mammals have become extinct due to the result of human activity in the past 400 years. Over 11,000 species of plants and animals are considered threatened today in the Atlantic Forest.[6] Over 52% of the tree species and 92% of the amphibians are endemic to this area. The forest harbors around 20,000 species of plants, with almost 450 tree species being found in just one hectare in some locations.[13]

New species are continually being found in the Atlantic Forest. In fact, between 1990 and 2006 over a thousand new flowering plants were discovered. Furthermore, in 1990 researchers re-discovered a small population of the black-faced lion tamarin (Leontopithecus caissara, previously thought to have been extinct.[22] A new species of blonde capuchin (Cebus queirozi), named for its distinguishing bright blonde hair, was discovered in northeastern Brazil at the Pernambuco Endemism Center in 2006.[23] A species of endangered three-toed sloth, named the maned sloth (Bradypus torquatus) because of its long hair, is endemic to the Atlantic Forest.[24] 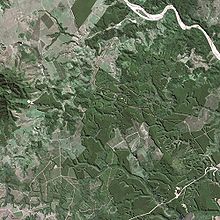 The incorporation of modern human societies and their needs for forest resources has greatly reduced the size of the Atlantic Forest, which has resulted in species impoverishment.[25] Almost 88% of the original forest habitat has been lost and replaced by human-modified landscapes including pastures, croplands, and urban areas. This deforestation continues at an annual rate of 0.5% and up to 2.9% in urban areas.

Agriculture: A major portion of human land use in the Atlantic Rain Forest is for agriculture. Crops include sugar-cane, coffee, tea, tobacco and more recently soybean and biofuel crops.[12]
Pasture: Even more common than using land for agriculture is the conversion of forest to cattle pastures.[26] This is commonly done by method of slash and burn which increases a forest chance of human-induced burning.
Hunting: Species in a fragmented forest are more susceptible to decline in population size because they are in an confined area that is more accessible to hunters. Larger animals make up the highest percentage of biomass. These animals are also the most rewarding to hunters and are heavily hunted in accessible fragments. This results in a change in species interactions such as seed dispersal and competition for resources.
Logging: Logging removes 10 to 80% of the canopy cover of a forest making that habitat more susceptible to natural elements such as wind and sunlight. This causes an increase in forest heating and desiccation.[27] Large amounts of organic litter and debris builds up which results in an increase in forests vulnerability to fires. Additionally, logging roads create accessibility for humans; and therefore increases the amount of human land disturbances and decreases the amount of natural forest.[27]
Fire: Human activity such as logging causes an increase in debris along forest floors that makes the Atlantic Forest more susceptible to fires. This is a forest type that is not accustomed to regular fire activity, so human induced fires dramatically affect the forest understory because plants do not have fire adaptations. In result, the forest becomes even more vulnerable to secondary fires, which are far more destructive and kill many more species including large trees.[27]

Habitat fragmentation leads to a cascade of alterations of the original forest landscape.[12] For example, the extent of human disturbances, including habitat destruction, in the Atlantic Forest has led to an extinction crisis.[28] The endemic species in this region are especially vulnerable to extinction due to fragmentation because of their small geographic ranges and low occurrence.[29] In a study of the Atlantic Forest fragments, community level biomass was reduced to 60% in plots less than 25 hectares.[30] Key ecological processes such as seed dispersal, gene flow, colonization and other processes are disturbed by fragmentation.[30] With many key vertebrate seed dispersers going extinct, it is predicted that many regional, fruit-bearing tree species in the Atlantic forest will become extinct due to failure of seedling recruitment and recolonisation.[26] With all these species already threatened, it is predicted that with the persistence of current deforestation rates the Atlantic forest will see continued extinction of species.[28]

Due to the Atlantic Forest's vast diversity of endemic plants and animals as well as the fragmentation affecting these species, many groups and organizations are working towards the restoration of this unique ecosystem. Non-governmental organizations (NGO) are huge benefactors in Brazil, providing funding as well as professional help to the Atlantic Forest due to the Brazilian Environmental Movement.[31] One organization, called BirdLife International, is using their research to preserve bird biodiversity of the area by primarily working with people towards sustainability in the use of natural resources.[31]

Some organizations are receiving grants from the Critical Ecosystem Partnership Fund (CEPF) if they abide by their directions.[31] These include:

Another strategy being implemented to maintain biodiversity within the Atlantic Forest is creating wildlife corridors. The World Bank is donating $44 million to create a corridor, which will be known as the Central Biodiversity Corridor, in the Atlantic Forest and one in the Amazon.[31] The Brazilian Development Bank has been financing, with non-reimbursable loans, 16 to 18 ecosystem restoration projects totaling 3,500 hectares and costing approximately $22 million under the so-called Iniciativa BNDES Mata Atlântica.[32] In order to preserve diversity, the state of Sao Paulo has created the Restinga de Bertioga State Park, a 9.3 thousand hectares park which also serves as a wildlife corridor linking the coastal regions to the Serra do Mar mountain range.[33] Some organizations, such as the Nature Conservancy, are planning to restore parts of the forest that have been lost and to build corridors that are compatible with the lifestyles of the native people.[34] The Amazon Institute is active in reforestation efforts in the northeastern state of Pernambuco, Brazil. During 2007, Joao Milanez and Joanne Stanulonis have planted 5,500 new trees in the mountains commencing with Gravata, adding to the precious little, ancient forest left.

The Pact for Atlantic Forest Restoration has assembled over 100 businesses, nongovernmental and governmental organizations around the goal of having 15 million hectares of the original ecosystem restored by 2050.[35]

The Pontifícia Universidade Católica do Rio Grande do Sul keeps a private reserve of the Araucaria moist forest ecoregion of approximately 3.100 ha called Pró-Mata, near the city of São Francisco de Paula in the state of Rio Grande do Sul. This reserve is used for research and biodiversity conservation. 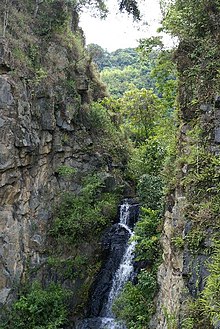 Terrestrial ecoregions within the Atlantic Forest Biome include: