Big Bear Lake is a small city in San Bernardino County, California, located in the San Bernardino Mountains along the south shore of Big Bear Lake, and surrounded by the San Bernardino National Forest. The city is located about 25 miles (40 km) northeast of the city of San Bernardino, and immediately west of the unincorporated town of Big Bear City. The population was approximately 5,019 at the 2010 census, down from 5,438 at the 2000 census. However, since it is a popular year-round resort destination, the actual number of people staying in or visiting the greater Big Bear Valley area regularly surges to over 100,000 during many weekends of the year.

The California Office of Environmental Health Hazard Assessment has issued a safety advisory for any fish caught in Big Bear Lake due to elevated levels of mercury and PCBs.[3]

Big Bear Lake was inhabited by the indigenous Serrano people for over 2,000 years before it was explored by Benjamin Wilson and his party. Once populated by only the natives and the grizzly bears, from which the area received its name, the population of the Big Bear Valley grew rapidly during the southern California gold rush from 1861 to 1912. Grizzly bears were not found in the region after 1908.[4] Today, there are black bears in the region since their introduction in 1933,[4] and they are sometimes sighted in residential areas.

A trip to Big Bear Lake from San Bernardino took two days on horse-drawn coaches. Kirk Phillips was a local who took a trip to New York City and saw the world's first bus line. This inspired him to create the world's second bus line from San Bernardino to Big Bear Valley using White trucks with several rows of seats. This made it possible for the villages to grow and for Big Bear Lake to become the first mountain recreation area in southern California.[5]

Many people traveled to enjoy recreation on the lake. However, another major draw was the natural hot spring. Emile Jesserun bought 40 acres (16 ha) of land that included the hot spring and built the first major resort in Big Bear, the Pan Hot Springs Hotel, in 1921. This resort was followed with others that strove to be the best by creating a country club atmosphere, complete with the amenities required to lure the Hollywood celebrities of the time including Cecil B. DeMille, Shirley Temple, and Ginger Rogers. By 1924, Big Bear was populated with 44 resorts and a constant stream of vacationers. The Pan Hot Springs Hotel, like many of the other resorts and hotels in Big Bear, was extensively damaged by fire in 1933.[6]

For Hollywood's film industry, the area has also been a popular place for shooting on location since the silent era. In late November 1915, Universal Studios filmed there for its three-reel production of John o' the Mountains starring Sydney Ayres and Louella Maxam.[7] The 1920 version of Last of the Mohicans was filmed there as well, as were some scenes for the 1936 film Daniel Boone, Gone with the Wind, 20th Century Fox's 1960 film North to Alaska, Disney's Old Yeller, the 1969 musical film Paint Your Wagon, the 1983 movie War Games, and the 1985 "dark comedy" Better Off Dead. Many television series have filmed sequences there too, including opening sequences in 1969 for the NBC children's program H.R. Pufnstuf.

Winter activities are also popular in Big Bear. The first ski jump in Big Bear was erected in 1929 and quickly claimed a world ski jump record. More jumps were built in Big Bear Lake and the Viking Ski Club of Los Angeles began to use them for competition and events. The move to a winter resort town was solidified in 1952 when Tommy Tyndall opened a resort in Big Bear Lake, now known as Snow Summit.[8] In some winters the area gets little snow, but snow machines keep the resorts in business.

In the summer of 1968, Caltech began construction of Big Bear Solar Observatory (BBSO) located on the north shore of Big Bear Lake. Due to extensive rain and snow, the lake rose several feet and BBSO was surrounded by water at the time construction was completed using makeshift barges in May 1970. BBSO, now operated by the New Jersey Institute of Technology, is still a major Big Bear Lake landmark connected to the north shore by a dirt and rock causeway.

During the 1990s, the city became famous as a training spot for boxing champions. Oscar De La Hoya, Mike Tyson, Fernando Vargas, Gennady Golovkin, and Shane Mosley are among the famous boxers who have trained at Big Bear.

In February 2013, a major manhunt occurred in the Big Bear Lake area to find Christopher Dorner, who by that point had killed three people. A standoff ended in nearby Angelus Oaks. 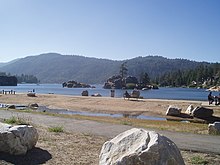 Due to the 6,750 feet (2,060 m) elevation[10] of the weather station, precipitation is greater than in the lowlands of southern California, averaging 19.98 in (507 mm) a year. The maximum 24-hour precipitation was 9.43 in (240 mm) on December 6, 1966. Measurable precipitation normally occurs 44.9 days a year. Mountain thunderstorms can produce heavy rainfall, even in midsummer (when most southern California lowland locations are quite dry). Big Bear Lake's climate is Csb (Warm-summer Mediterranean) under the Köppen climate classification, bordering a humid continental climate (Dsb); it lies within USDA plant hardiness zone 7a.[11]

According to the 2010 United States Census, Big Bear Lake had a median household income of $32,869, with 16.9% of the population living below the federal poverty line.[15]

There were 2,343 households, out of which 25.3% had children under the age of 18 living with them, 51.3% were married couples living together, 8.5% had a female householder with no husband present, and 36.2% were non-families. 29.4% of all households were made up of individuals, and 10.8% had someone living alone who was 65 years of age or older. The average household size was 2.3 and the average family size was 2.8.

Lake view from the east, with observatory visible in center

Big Bear Lake is Southern California's largest recreation lake. It is about seven miles long and about one mile at its widest. The primary summer attraction in Big Bear was fishing and it still is one of the most common activities there.[5] The most abundant types of fish are trout, bass and catfish.[17] Hiking, mountain biking and horse riding are also very popular. San Bernardino National Forest offers many trails in varying degrees of difficulty.[18] During winter season Big Bear Lake becomes a skiing and snowboarding destination for Southern California. There are two ski resorts: Snow Summit and Bear Mountain.[19] The first Winter X Games were held in Big Bear Lake in 1997. The town was also home to the Big Bear Lake International Film Festival from 2000 to 2014.

The community is served by the Big Bear Lake Branch of the San Bernardino County Library. The 8500 square-foot library is located on Garstin Drive near the southern shore of Big Bear Lake and offers books, videos, CDs, DVDs, audio books, e-books, computers, and internet access for patrons. The library was remodeled in 2009, which included additional public computers and a new circulation desk that allows for self check-out. Story times for younger children, teen programs, donated book sales, and special events are also held at the library.[20]

The City of Big Bear Lake is a charter city under the laws of the State of California. It operates under the council/manager form of government. The city manager is Frank Rush. The city council includes five members elected at-large. The mayor is selected annually from among the city council members. The current mayor is Rick Herrick.[21]

The Big Bear Valley is accessible by four California state highways: SR 18 from Highland, SR 330 from San Bernardino, SR 38 from Redlands, and SR 18 from Victorville.