Butte County comprises the Chico, CA Metropolitan Statistical Area. It is in the California Central Valley, north of the state capital of Sacramento. Butte County is known as the "Land of Natural Wealth and Beauty."[citation needed]

Butte County is drained by the Feather River and the Sacramento River. Butte Creek and Big Chico Creek are additional perennial streams, both tributary to the Sacramento. The county is home to California State University, Chico and Butte College.

There are four major hospitals and the State of California defines Butte County as being inside Health Service Area 1. A special district, the Butte County Air Quality Management District, regulates airborne pollutant emissions in the county. It does this following regional regulations, state, and federal laws. For example, in recent years, the agency changed rules that once allowed residents to burn household trash outdoors.

Butte County is named for the Sutter Buttes in neighboring Sutter County; butte means "small knoll" or "small hill" in French.[6] Butte County was incorporated as one of California's 19 original counties on February 18, 1850. The county went across the present limits of the Tehama, Plumas, Colusa, and Sutter counties.[7] The first sheriff was Joseph Q. Wilbur.[8]

Between November 8–25, 2018, a major wildfire, the Camp Fire, destroyed most of the town of Paradise, the adjacent community of Concow, and many square miles of rural, hilly country east of Chico. More than eighty people were killed, fifty thousand were displaced, over 150,000 acres were burned, and nearly twenty thousand buildings were destroyed.[9][10] The Camp Fire was California's most destructive and deadliest fire.[11] 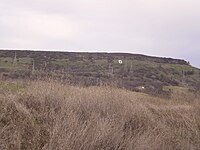 The county is drained by the Feather River and Butte Creek. Part of the county's western border is formed by the Sacramento River. The county lies along the western slope of the Sierra Nevada, the steep slopes making it prime territory for the siting of hydroelectric power plants. About a half dozen of these plants are located in the county, one of which, serves the Oroville Dam which became severely stressed by overflow water in 2017, and which remains a concern today.

The citizens of the county of Butte are represented by the five member Butte County Board of Supervisors.

The governmental headquarters of the Mechoopda Indian Tribe of Chico Rancheria is located in Chico.

See also: List of members of the California Senate from Butte County

On November 4, 2008, Butte County voted 56.7% for Proposition 8 which amended the California Constitution to ban same-sex marriages.[34]

Butte is a Republican-leaning county in Presidential and congressional elections. Lyndon Johnson in 1964 is the last Democrat to win a majority in the county (It was also his weakest county victory in the state that year); however, Bill Clinton, Barack Obama, and Joe Biden won the county by plurality in 1992, 2008, and 2020, respectively.

There are roughly 90 public schools in the county according to the National Center for Educational Statistics. The schools are operated by the County Office of Education and 15 school districts, which are:

Butte County Library provides library services to residents of the County through six branches in Biggs, Chico, Durham, Gridley, Oroville and Paradise. The mission of the Butte County Library is to provide all individuals, regardless of age, ethnic background, educational or economic level, with free access to ideas, information, and technology.

For many years, the library served rural and mountain communities through regularly scheduled bookmobile visits; however, due to budget cuts, this service was discontinued in 2009 and the bookmobile was sold. The library serves low-literacy adults through several programs of the Butte County Library Literacy Services division, including the Adult Reading Program, Families for Literacy and the Literacy Coach, a 36-foot (11 m) vehicle that provides mobile programming like story times, parent meetings, workshops, and computer and teacher trainings.

The library operates as a department of the County of Butte, governed by the Butte County Board of Supervisors. 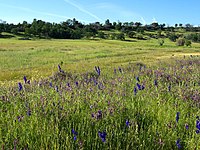 Butte County is home to Bidwell Park in Chico, one of the largest municipal parks in the United States.

Butte Regional Transit or the B-Line, provides service in and between Chico, Oroville, Paradise, Gridley and Biggs. Chico is also a connection point for Glenn Ride buses to Glenn County and Plumas Transit Systems buses to Plumas County. 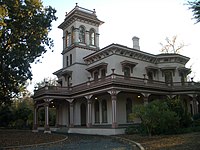 A photo of Bidwell Mansion in Chico. 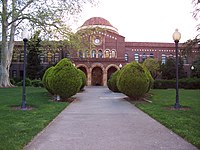 The population ranking of the following table is based on the 2010 census of Butte County.[38]

Several movies have been filmed in Butte County, including Gone with the Wind, The Outlaw Josey Wales, Friendly Persuasion, Magic Town, The Klansman, Ruby Ridge: An American Tragedy, The Adventures of Robin Hood and Under Wraps. The most recent season of the television series Sons of Anarchy features an episode in which the Sons come into contact with corrupt police in the fictional town of Eden, located in Butte County.