Cabazon (Spanish: Cabazón)[3][4] is a unincorporated community in Riverside County, California, United States. Cabazon is on the Pacific Crest Trail.[5] In the 21st century, the area has become a tourist stop, due to the Morongo Casino, Resort & Spa and Desert Hills Premium Outlets. The population was 2,535 during the 2010 Census. For statistical purposes, the United States Census Bureau has defined Cabazon as a census-designated place (CDP).

Cabazon was initially established as a settlement in the 1870s after the Southern Pacific Railroad built a railroad station there. The station was originally named Jacinto, but was renamed Cabezone after the Spanish name of a nearby Indian rancheria. The Spanish had named the latter after a chief of the Cahuilla Indians during the colonial period. He was named for his large head.

In the late 19th century, a workers' camp known as Hall's Siding, which included a hotel and dance hall, developed. It was abandoned after the railroad relocated its facilities. In 1884 a new town was laid out by the Scottish-owned Cabazon Land and Water Company, which established a fruit farm. Some lots were sold, but were later repurchased.

The large plot of land stayed intact until it was bought by a developer in 1910. The developer established a school and a post office, but was unable to attract many residents.[6]

Cabazon was incorporated as a city on November 1, 1955.[7] Under California law, incorporated cities could host cardrooms, while unincorporated areas could not.[7] Some businessmen hoped that cardrooms would attract new residents and businesses. During the next 16 years, the city struggled with scandal, political instability, and stalled growth, as cardroom operators vied with other landowners and residents for control of the city government.[7]

In its first seven years, a succession of 18 police chiefs and 21 City Council members served for short terms in the city.[8] One key dispute was between residents who hoped that Cabazon could be developed as a resort city like Palm Springs to the east, versus cardroom owners who wanted to keep Cabazon's population low so that the city government's operating expenses (and their taxes) would remain low and not impinge on their profits.[7]

In a popular tactic of small jurisdictions, the city turned then-U.S. Route 60 down Main Street into a speed trap; it raised as much as $19,000 per year by fines from speeding tickets. That revenue stream vanished when Interstate 10 was completed in California circa 1964, and US Route 60 was decommissioned.[7] A cardroom operator sued the City Council over its attempt to raise the license fee for cardrooms. This infuriated those landowners and residents who did not profit from the city's cardrooms. They sought to shut down the city so that the cardrooms would also be forced to shut down.[7]

On September 14, 1971, the city's electorate voted in a special election, 192 to 131 in favor of disincorporation.[7] The election results were upheld by the state courts,[7] and the city government disincorporated in 1972.[9]

With changing demographics and regional economy, locals in the early 21st century have intermittently discussed reincorporating the area.[8][10]

In late October 2006, a major arson fire started near Cabazon.[11] During the course of five days, the Esperanza Fire burned over 40,000 acres (160 km2) and resulted in the deaths of five firefighters.[11] California State Route 243 was renamed as the "Esperanza Firefighters Memorial Highway" to honor them.[12]

According to the Köppen Climate Classification system, Cabazon has a hot desert climate, abbreviated "BWh" on climate maps.

According to the 2010 United States Census, Cabazon had a median household income of $33,333, with 22.1% of the population living below the federal poverty line.[18] 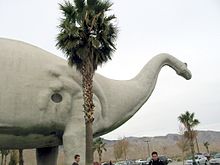 Claude Bell's giant dinosaur sculptures are icons of roadside America. The site features two sculptures: a 150-ton building in the shape of a larger-than-life-sized Brontosaurus (begun in 1964, completed in 1975), and a 100-ton Tyrannosaurus rex structure (built in 1981).[20][21] The dinosaurs, nicknamed "Dinny" and "Mr. Rex," respectively, were installed to attract customers to Claude Bell's Wheel Inn Cafe.

Some residents grew up with them along the highway in southern California; others may remember them from various films and videos, notably in Pee-wee's Big Adventure.[22] Developers purchased the dinosaurs in 2005 from the Bell family for $1.2 million.[23]

Cabazon is the territory of the federally recognized Morongo Band of Mission Indians, which have developed the Morongo Casino, Resort & Spa. Its 27-story hotel tower dominates the San Gorgonio Pass.[27][28] This is one of the largest Native American casinos in the United States.[28]

In addition, they partnered for tribal business with Arrowhead Mountain Springwater to develop a huge water-bottling facility on the eastern edge on Cabazon in 2003. Its construction earned a LEED Silver rating.[29]

The Cabazon Library, opened in 2013, is part of the Riverside County Library System, operated under contract by Library Systems and Services, LLC.[30]

In the United States House of Representatives, Cabazon is in California's 36th congressional district, represented by Democrat Raul Ruiz.[32]