Government Agency
"Caltrans" redirects here. Not to be confused with Caltrain. 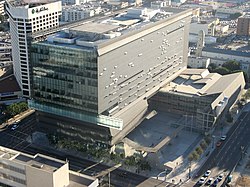 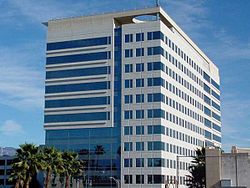 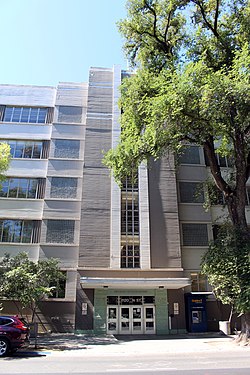 The earliest predecessor of Caltrans was the Bureau of Highways, which was created by the California Legislature and signed into law by Governor James Budd in 1895.[7] This agency consisted of three commissioners who were charged with analyzing the roads of the state and making recommendations for their improvement. At the time, there was no state highway system, since roads were purely a local responsibility. California's roads consisted of crude dirt roads maintained by county governments, as well as some paved streets in certain cities, and this ad hoc system was no longer adequate for the needs of the state's rapidly growing population. After the commissioners submitted their report to the governor on November 25, 1896, the legislature replaced the Bureau with the Department of Highways.[8]

Due to the state's weak fiscal condition and corrupt politics, little progress was made until 1907, when the legislature replaced the Department of Highways with the Department of Engineering, within which there was a Division of Highways.[7] California voters approved an $18 million bond issue for the construction of a state highway system in 1910, and the first California Highway Commission was convened in 1911.[7] On August 7, 1912, the department broke ground on its first construction project, the section of El Camino Real between South San Francisco and Burlingame, which later became part of California State Route 82.[9] The year 1912 also saw the founding of the Transportation Laboratory and the creation of seven administrative divisions, which are the predecessors of the 12 district offices in use as of 2018.[8] The original seven division headquarters were located in:[10]

In 1913, the California State Legislature began requiring vehicle registration and allocated the resulting funds to support regular highway maintenance, which began the next year.[9]

In 1921, the state legislature turned the Department of Engineering into the Department of Public Works, which continued to have a Division of Highways.[11] That same year, three additional divisions (now districts) were created, in Stockton, Bishop, and San Bernardino.[11]

In 1933, the state legislature enacted an amendment to the State Highway Classification Act of 1927, which added over 6,700 miles of county roads to the state highway system.[11] To help manage all the additional work created by this massive expansion, an eleventh district office was founded that year in San Diego.[11]

The enactment of the Collier–Burns Highway Act of 1947 after "a lengthy and bitter legislative battle" was a watershed moment in Caltrans history.[12] The act "placed California highway's program on a sound financial basis" by doubling vehicle registration fees and raising gasoline and diesel fuel taxes from 3 cents to 4.5 cents per gallon. All these taxes were again raised further in 1953 and 1963.[12] The state also obtained extensive federal funding from the Federal-Aid Highway Act of 1956 for the construction of its portion of the Interstate Highway System.[13] Over the next two decades after Collier-Burns, the state "embarked on a massive highway construction program" in which nearly all of the now-extant state highway system was either constructed or upgraded.[13] In hindsight, the period from 1940 to 1969 can be characterized as the "Golden Age" of California's state highway construction program.[14]

Caltrans went through a difficult period of transformation during the 1970s, as its institutional focus shifted from highway construction to highway maintenance.[17] The agency was forced to contend with declining revenues, increasing construction and maintenance costs (especially the skyrocketing cost of maintaining the vast highway system built over the past three prior decades), widespread freeway revolts, and new environmental laws.[17] In 1970, the enactment of the National Environmental Policy Act and the California Environmental Quality Act forced Caltrans to devote significant time, money, people, and other resources to confronting issues such as "air and water quality, hazardous waste, archaeology, historic preservation, and noise abatement."[16] The devastating 1971 San Fernando earthquake compelled the agency to recognize that its existing design standards had not adequately accounted for earthquake stress and that numerous existing structures needed expensive seismic retrofitting.[18] Maintenance and construction costs grew at twice the inflation rate in this era of high inflation; the reluctance of one governor after another to raise fuel taxes in accordance with inflation meant that California ranked dead last in the United States in per capita transportation spending by 1983.[18] During the 1980s and 1990s, Caltrans concentrated on "the upgrading, rehabilitation, and maintenance of the existing system," plus occasional gap closure and realignment projects.[18]

For administrative purposes, Caltrans divides the State of California into 12 districts, supervised by district offices. Most districts cover multiple counties; District 12 (Orange County) is the only district with one county. The largest districts by population are District 4 (San Francisco Bay Area) and District 7 (Los Angeles and Ventura counties). Like most state agencies, Caltrans maintains its headquarters in Sacramento, which is covered by District 3. 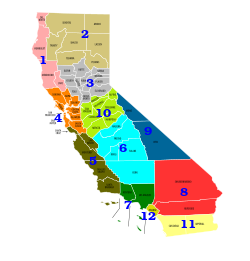