State capitol building of the U.S. state of California

The California Capitol in 1890.

The structure was completed between 1860 and 1874, designed by architect Reuben S. Clark of Clark & Kenitzer, one of San Francisco's oldest architectural firms, founded in 1854.[5][6] Between 1949 and 1952, the Capitol's apse was demolished to make way for the building's expansion with the construction of the East Annex.[7] The offices of the governor of California are housed in the East Annex. The Capitol and grounds were listed on the office of the National Register of Historic Places in 1973,[1] and listed as a California Historical Landmark in 1974, with a re-dedication on January 9, 1982, to commemorate the close of the bicentennial restoration project.[8][9] The building underwent a major renovation known as the California State Capitol Restoration, from 1975 until 1982, involving an architectural restoration and structural reconstruction for earthquake safety. Although not generally considered earthquake country, Sacramento was hit by two earthquakes within days of each other in 1892 which damaged the Capitol.[10]

In 2012, many protesters stormed the building and were arrested.[11] 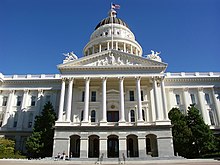 The Capitol was designed in a Neoclassical style by prominent architect Reuben S. Clark in 1860.

The building is based on the U.S. Capitol building in Washington, D.C. The west facade ends in projecting bays, and a portico projects from the center of the building. At the base of the portico, seven granite archways brace and support the porch above. Eight fluted Corinthian columns line the portico. A cornice supports the pediment above depicting Minerva surrounded by Education, Justice, Industry and Mining.

Above the flat roof with balustrade are two drums supporting a dome. The first drum consists of a colonnade of Corinthian columns; the second, Corinthian pilasters. Large arched windows line the drum walls. The dome is 64 m (210 ft) high, and supports a lantern with a smaller dome capped with a gold-leafed orbed finial.

The California Senate chamber seats its forty members in a large chamber room decorated in red, which is a reference to the British House of Lords (also the upper house of a bicameral legislature). The chamber is entered through a second-floor corridor. From the coffered ceiling hangs an electric reproduction of the original gas chandelier. A hand-carved dais caps off a recessed bay framed by Corinthian columns.

The Latin phrase "Senatoris est civitatis libertatem tueri" ("It is the duty of the Senator to guard the civil liberties of the Commonwealth") lines the cornice. A portrait of George Washington by Jane Stuart, the daughter of Gilbert Stuart, is on the wall above. The State Seal hangs above. Statues of the Roman goddess of wisdom Minerva once overlooked both chambers. Today, Minerva, sculpted by Michael H. Casey, appears only in the senate chambers.

The Capitol lies at the east end of the Capitol Mall.

Gilded Corinthian columns support the gallery above, and dark red curtains that can be drawn for privacy are tied back along the columns. High arched windows run along the bottom below rectangular pane windows. Behind the rostrum, there are two chairs with red velvet cushions, reserved for the president pro tempore of the senate and the speaker of the assembly, but they are never used.

The California Assembly chamber is located at the opposite end of the building. Its green tones are based on those of the British House of Commons, the lower house. The dais rests along a wall shaped like an "E", with the central projection housing the rostrum. Along the cornice is the Assembly motto, in Latin: Legislatorum est justas leges condere ("It is the duty of legislators to establish just laws").[12] 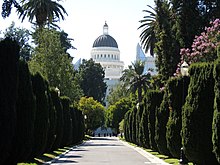 View of the dome from Capitol Park.

The capitol's grounds are known as Capitol Park, an area of 10 undivided city blocks running from 10th to 16th and from L to N Streets. The entire Capitol Park area is included in the National Register historic district listing.[1][13] Capitol Park contains numerous monuments and memorials, including the California Firefighters Memorial and El Soldado Monument.