The California chaparral and woodlands is a terrestrial ecoregion of southwestern Oregon, northern, central, and southern California (United States) and northwestern Baja California (Mexico), located on the west coast of North America. It is an ecoregion of the Mediterranean forests, woodlands, and scrub biome, and part of the Nearctic realm.

The California chaparral and woodlands ecoregion is subdivided into three smaller ecoregions.[1] 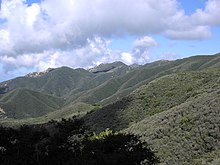 Montane chaparral and woodlands in the Santa Ynez Mountains, near Santa Barbara, California

Most of the population of California and Baja California lives in these ecoregions, which includes the San Francisco Bay Area, Ventura County, the Greater Los Angeles Area, San Diego County, and Tijuana. 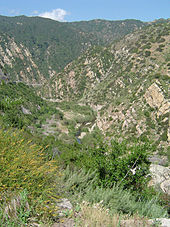 Southern coastal sage and chaparral in the Santa Monica Mountains, near Malibu.

Another notable insect resident of this ecoregion is the rain beetle (Pleocoma sp.) It spends up to several years living underground in a larval stage and emerges only during wet-season rains to mate.

Chaparral, like most Mediterranean shrublands, is highly fire resilient and historically burned with high-severity, stand replacing events every 30 to 100 years.[2] Historically, Native Americans burned chaparral to promote grasslands for textiles and food.[3] Though adapted to infrequent fires, chaparral plant communities can be exterminated by frequent fires especially with climate change induced drought.[4][5] Today, frequent accidental ignitions can convert chaparral from a native shrubland to nonnative annual grassland and drastically reduce species diversity, especially under global-change-type drought.[4][5] The historical fire return interval for chaparral communities used to be 30–50 years, but has now decreased to 5–10 years due to human interference.[citation needed] 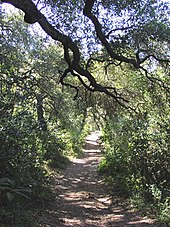 The region has been heavily affected by grazing, logging, dams and water diversions, and intensive agriculture and urbanization, as well as competition by numerous introduced or exotic plant and animal species. Some unique plant communities, like southern California's Coastal Sage Scrub, have been nearly eradicated by agriculture and urbanization. As a result, the region now has many rare and endangered species, including the California condor (Gymnogyps californianus).[citation needed]