Ceanothus is a genus of about 50–60 species of nitrogen-fixing shrubs and small trees in the buckthorn family (Rhamnaceae).[2][3][4][5] Common names for members of this genus are buckbrush, California lilac, soap bush, or just ceanothus.[6][7][8] "Ceanothus" comes from Ancient Greek: κεάνωθος (keanōthos), which was applied by Theophrastus (371–287 BC) to an Old World plant believed to be Cirsium arvense.[9][10]

The genus is native to North America with the highest diversity on the western coast.[4][11] Some species (e.g., C. americanus) are restricted to the eastern United States and southeast Canada, and others (e.g., C. caeruleus) extend as far south as Guatemala. Most are shrubs 0.5–3 metres (1.6–9.8 ft) tall, but C. arboreus and C. thyrsiflorus, both native to California, can be small multi-trunked trees up to 6–7 metres (20–23 ft) tall.

There are two subgenera within this genus: Ceanothus and Cerastes. The former clade is less drought-resistant, having bigger leaves. The evolution of these two clades likely started with a divergence in the niches filled in local communities, rather than a divergence on the basis of geography.[12]

The Californian species of Ceanothus are commonly known collectively as California lilacs, with individual species having more descriptive common names. Species native elsewhere have other common names such as New Jersey tea for C. americanus, as its leaves were used as a black tea substitute during the American Revolution.[2][13] In garden use, most are simply called by their scientific names or an adaptation of the scientific name, such as 'Maritime ceanothus' for C. maritimus. 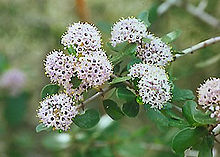 The status of the following species is unresolved:[14]

The following hybrids have been described:[14]

The status of the following hybrids is unresolved:[14] 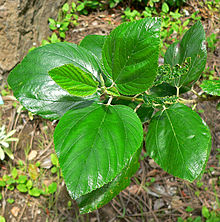 The majority[citation needed] of the species are evergreen, but the handful of species adapted to cold winters are deciduous. The leaves are opposite or alternate (depending on species), small (typically 1–5 cm long), simple, and mostly with serrated margins.

Ceanothus leaves may be arranged opposite to each other on the stem, or alternate. Alternate leaves may have either one or three main veins rising from the base of the leaf.[16]

The leaves have a shiny upper surface that feels "gummy" when pinched between the thumb and forefinger, and the roots of most species have red inner root bark.[17] 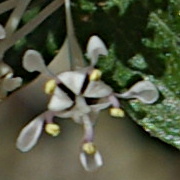 The flowers are tiny and fragrant and produced in large, dense clusters. A few species are reported to be so intensely fragrant they are almost nauseating, and are said to resemble the odor of "boiling honey in an enclosed area".[citation needed] The seeds of this plant can lie dormant for hundreds of years,[citation needed] and Ceanothus species are typically dependent on forest fires to trigger germination of their seeds.[17] 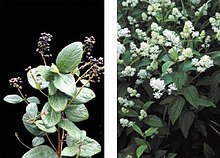 Plants in this genus are widely distributed and can be found on dry, sunny hillsides from coastal scrub lands to open forest clearings, from near sea level to 9,000 feet (2,700 m) in elevation. These plants are profusely distributed throughout the Rocky Mountains from British Columbia south through Colorado, the Cascades of Oregon and California, and the Coastal Ranges of California.

Ceanothus velutinus is perhaps the most widespread member of this genus, occurring through much of western North America.[17] The plants in this genus often co-occur with one another, especially when they are more distantly related.[12] 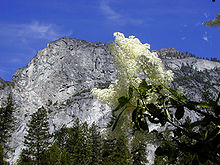 Ceanothus is a good source of nutrition for deer, specifically mule deer along the West Coast of the United States. However, the leaves are not as nutritious from late spring to early fall as they are in early spring. Porcupines and quail have also been seen eating stems and seeds of these shrubs. The leaves are a good source of protein and the stems and leaves have been found to contain a high amount of calcium.

Many Ceanothus species are popular ornamental plants for gardens. Dozens of hybrids and cultivars have been selected, such as flexible ceanothus, Ceanothus × flexilis (C. cuneatus × C. prostratus).[citation needed]

The following cultivars and hybrids have gained the Royal Horticultural Society's Award of Garden Merit (as of 2017):[18]

Other cultivars available include:-

There are also more cultivars and hybrids of Ceanothus arboreus, Ceanothus griseus horizontalis (groundcovers), and Ceanothus thyrsiflorus in the nursery trade.

Propagation of ceanothus is by seed, following scarification and stratification. Seeds are soaked in water for 12 hours followed by chilling at 1 °C for one to three months. It can also sprout from roots and/or stems. Seeds are stored in plant litter in large quantities. It is estimated that there are about two million seeds per acre in forest habitats. Seeds are dispersed propulsively from capsules and, it has been estimated, can remain viable for hundreds of years. In habitat, the seeds of plants in this genus germinate only in response to range fires and forest fires.[citation needed]

Native Americans used the dried leaves of this plant as an herbal tea, and early pioneers used the plant as a substitute for black tea. Miwok Indians of California made baskets from Ceanothus branches. Ceanothus integerrimus has been used by North American tribes to ease childbirth.[37]

Ceanothus is actinorhizal, meaning it fixes nitrogen through a symbiotic relationship with Frankia. Six genera within Rhamnaceae are actinorhizal, but Ceanothus is the only genus not in the monophyletic tribe Colletieae. This suggests that actinorhizal symbiosis may have evolved twice in Rhamnaceae.[38] Frankia forms nodules on the roots of Ceanothus, converting atmospheric nitrogen (N
2) into ammonia (NH
3) using nitrogenase.[39][40]