For other uses, see Central California (disambiguation).
Region of California in the United States

Central California is generally thought of as the middle third of the state, north of Southern California, which includes Los Angeles, and south of Northern California, which includes San Francisco. It includes the northern portion of the San Joaquin Valley (which itself is the southern portion of the Central Valley, beginning at the Sacramento–San Joaquin River Delta), part of the Central Coast, the central hills of the California Coast Ranges and the foothills and mountain areas of the central Sierra Nevada.

Central California is considered to be west of the crest of the Sierra Nevada. East of the Sierra is Eastern California. The largest cities in the region (over 50,000 population), from most to least populous, are Fresno, Bakersfield, Stockton, Modesto, Salinas, Visalia, Clovis, Santa Maria, Merced, Turlock, Madera, Lodi, Tulare, Porterville, Hanford and Delano. Over time, droughts and wildfires have increased in frequency and become less seasonal and more year-round, further straining the region's water security.[1][2][3]

Central California can have widely varying definitions depending on the context. Some divide the state by lines of latitude making northern, central and southern sections. Others divide by county lines or watershed boundaries. Some definitions include more of the San Joaquin Valley and even larger portions of the Central Valley. Some have less or none of Central Coast. 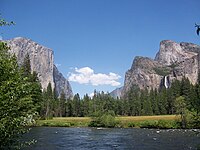 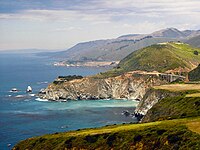 Generally the widest definition of central California is the middle third of the state by latitude.[citation needed] The southern boundary of that area would be 35° 41', which nearly coincides with the county lines already used for the southern boundary that cross the state west-to-east below Monterey, Kings and Tulare Counties. The northern boundary of that area at 38° 51' crosses just north of the Sacramento metro area. However, the San Francisco Bay and Sacramento metro areas are traditionally considered parts of Northern California, intuitively grouped together as the northern urban center within the state. That leaves the most accepted definitions of central California to the areas south of there.[citation needed]

Central California as defined above includes the following 10 counties:

The following counties are partially contained within central California:

Area cities and towns listed below are major regional centers or county seats. 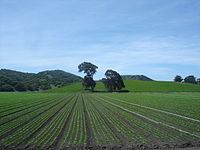 The following regions are entirely contained within central California:

The following regions are partially contained within central California:

Central California has opened two new universities recently, one in each of the past two decades.

Fresno Pacific University is a private university in Fresno.

The Naval Postgraduate School and Defense Language Institute are located in Monterey.

The following community college campus sites are in the region:[4]

There are no community colleges in Mariposa or San Benito Counties.

The California High-Speed Rail system is under planning. If built, it would have stations in Fresno and Merced on the initial line between San Francisco/San Jose and Los Angeles.

Freight rail is served by commercial railroads. Union Pacific Railroad and BNSF Railway operate mainline freight through the region in the Central Valley.

Variations on significant/influential definitions of the term central California are collected in this section.

The following counties are self-described as being in central California or central within California:

The following are definitions by influential organizations: