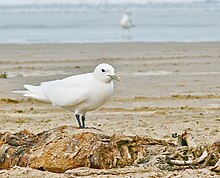 A rare vagrant Ivory Gull on a Central Coast beach

The Central Coast is an area of California, roughly spanning the coastal region between Point Mugu and Monterey Bay. It lies northwest of Los Angeles County and south of San Mateo and Santa Clara counties, and includes the rugged, undeveloped stretch of coastline known as Big Sur.[1] From south to north, there are six counties that make up the Central Coast: Ventura, Santa Barbara, San Luis Obispo, Monterey, San Benito, and Santa Cruz.[2][3] 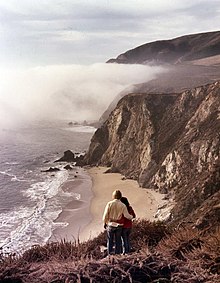 The Central Coast area was originally inhabited by Chumash and other Native American people since at least 10,000 BC. Many of these communities were coastal, where the people utilized marine resources and dwelt near freshwater inflows to the Pacific Ocean. For example, there were significant communities near the mouth of Morro Creek and Los Osos Creek.[5]

Juan Rodríguez Cabrillo visited the Central Coast, landing in Santa Barbara County in 1542, having sailed from the south.[6]

The region is known primarily for agriculture and tourism. Major crops include wine grapes, lettuce, strawberries, and artichokes. The Salinas Valley is one of the most fertile farming regions in the United States. Tourist attractions include Cannery Row in Monterey, the Monterey Bay Aquarium, the theatres, galleries and white sand beaches of Carmel-by-the-Sea, the golf courses of Pebble Beach and the Monterey Peninsula, the rugged coastline of Big Sur and Hearst Castle in San Simeon. Further south is Morro Rock and the port city of Morro Bay, which is adjacent to college town San Luis Obispo. The Santa Ynez Valley has become a hotbed for wine tasting, with towns such as Buellton, Los Olivos, and Santa Ynez growing in popularity in recent years. It also is home to the Central Coast Film Society,[7] which celebrates filmmakers, cinema and media arts that are from the region, also known as "Hollywood's Backyard."

The six counties that make up the Central Coast region had an estimated population of 2,348,601 according to the 2020 census.[9]

Travel is almost entirely by private automobile. Because of its position roughly halfway between the major cities of Los Angeles and San Francisco, San Luis Obispo is home to America's first motel. The major highway is U.S. Route 101, which runs north-south from Los Angeles, through most of the major communities of the Central Coast, to San Francisco. State Route 1, a smaller but much more scenic route, connects the coastal communities, running through San Simeon, Morro Bay, and Big Sur. Amtrak maintains train service with the Coast Starlight and Pacific Surfliner routes along the Union Pacific Railroad Coast Line that also transports freight. There are no major airports, although Monterey, Santa Barbara, Santa Maria and San Luis Obispo have regional airports with commuter service. Greyhound buses serve most of the region.