Cumberland is the northeasternmost town in Providence County, Rhode Island, United States, first settled in 1635 and incorporated in 1746. The population was 36,405 at the 2020 census, making it the seventh-largest municipality and the largest town in the state.[3]

Cumberland was originally settled as part of Wrentham, Massachusetts, which was purchased from the local Indigenous Americans by the Plymouth Colony. It was later transferred to Rhode Island as part of a long-running boundary dispute. The town was named in honor of Prince William, Duke of Cumberland.[2]

William Blackstone (also spelled William Blaxton in colonial times) was the first European to settle and live in Cumberland. (He was also the first European to have settled in Boston, but left when he and the newly arrived Puritans disagreed about religion.) He preached his brand of tolerant Christianity under an oak tree that became an inspiration to Christians worldwide.[4] He lived on a farm in the Lonsdale area of Cumberland, where he cultivated the first variety of American apples, the Yellow Sweeting. The site of his home is now occupied by the Ann & Hope mill.

The popular tourist destination "Nine Men's Misery" is a tomb found on the grounds of a former Trappist monastery (Abbey of Our Lady of the Valley), part of which was destroyed in a fire in 1950. The Trappists sold the monastery and grounds to the town and part of the building was converted into the Edward J. Hayden Library, aka Cumberland Public Library in 1976. This combined three smaller libraries into one.

Cumberland was the site of iron works that made cannons and cannonballs for the French and Indian War and the American Revolution. Additionally, Cumberland (along with the neighboring towns of Central Falls, RI, Lincoln, RI, and Attleboro, Massachusetts) was the home of the Valley Falls Company, which is the original antecedent of Berkshire Hathaway, now one of the world's largest and most successful companies.

A machine shop in Cumberland made the first power looms for woolens in America.[5] These were reportedly used at the Capron Mill in Uxbridge, around 1820,[5] that burned in a fire in 2007.

Aaron Fricke was denied a request to bring a same-sex date to a school prom at Cumberland High School 1979. In an early legal victory for LGBT rights, a federal court held that such a denial violated the student's free speech rights, in Fricke v. Lynch.

In the summers of 2011 and 2014,[6] the Cumberland American Little League baseball team, led by coach David Belisle (both times), won the New England Regional Little League Baseball Championship and went on to play in the Little League World Series. 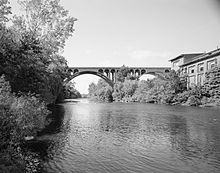 Cumberland is the easternmost town along the state's northern border with Massachusetts, making it the state's de facto northeasternmost town. Cumberland borders the Rhode Island cities of Woonsocket to the northwest and Central Falls, to the south and the town of Lincoln to the west as well as the Massachusetts towns of Wrentham to the north, Plainville and North Attleborough to the east and city of Attleboro to the southeast.

The Rhode Island state rock Cumberlandite is a rare iron-rich mineral unique to the region. The only large deposit of the mineral in the world is found off Elder Ballou Meeting House Road in northern Cumberland. Though the ore was used to make cannons during the colonial era, the resulting casts were of poor quality and prone to cracking. A major geologic feature of the area is Diamond Hill, a massive outcropping of white quartz. The hill once was host to two small ski areas and is now a town park.

In presidential elections, Cumberland is reliably Democratic as no Republican presidential nominee has carried the town in over three decades.

The school system is led by its seven-member School Committee that is elected to serve for two years and includes a Chairperson, Vice-chairperson and Clerk. The School Committee hires a Superintendent of Schools to administer policies and to manage and lead learning in the district. The Cumberland Superintendent of Schools (in chronological order) are Mr. Robert Condon, Dr. Robert McGinnis, Mr. Rodney McFarlin, Dr. Robert Patterson, Mr. Robert Wallace (1993–1996), Mr. Joseph Nasif (1996–2005), Dr. Donna Morelle (2005–2011), Dr. Phil Thornton (2011–2015), and Mr. Robert Mitchell (2015–present).

The Blackstone Valley Prep High School, a $10 million mayoral charter school, opened in 2017 on the site of a former lumber center in Valley Falls.[11]

The one non-public school in Cumberland, Mercymount Country Day School, is run by the Sisters of Mercy of the Americas, a Roman Catholic order which has its New England regional headquarters in Cumberland.

Cumberland is home to the Arnold Mills Fourth of July Parade and 4 Mile Road Race, which is held each year to celebrate (Fourth of July). The first recorded Arnold Mills Parade was held on July 4, 1927.[12] During the 2020 COVID-19 pandemic, the road race was held "virtually" for the first time.

A popular event, Cumberlandfest, is held each year on the second weekend of August at Diamond Hill Park on Diamond Hill Road. This event features a carnival, with rides and venues, as well as live entertainment and a small fireworks show. Proceeds go to the town's athletic programs.

Historic Metcalf-Franklin Farm on Abbott Run Valley Road was the last working dairy farm in Cumberland. Open historic fields, exposed farmers walls and a traditional "cow" pond are open for exploration. The 1810s barn and 1850s house are in the process of historical preservation.