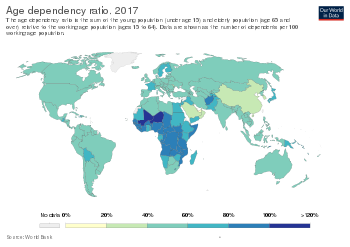 Consideration of the dependency ratio is essential for governments, economists, bankers, business, industry, universities and all other major economic segments which can benefit from understanding the impacts of changes in population structure. A low dependency ratio means that there are sufficient people working who can support the dependent population.[2] A lower ratio could allow for better pensions and better health care for citizens. A higher ratio indicates more financial stress on working people and possible political instability.[3][4] While the strategies of increasing fertility and of allowing immigration especially of younger working age people have been formulas for lowering dependency ratios, future job reductions through automation may impact the effectiveness of those strategies.

In published international statistics, the dependent part usually includes those under the age of 15 and over the age of 64. The productive part makes up the population in between, ages 15 – 64. It is normally expressed as a percentage:

As the ratio increases there may be an increased burden on the productive part of the population to maintain the upbringing and pensions of the economically dependent. This results in direct impacts on financial expenditures on things like social security, as well as many indirect consequences.

Below is a table constructed from data provided by the UN Population Division.[7] It shows a historical ratio for the regions shown for the period 1950 - 2010. Columns to the right show projections of the ratio. Each number in the table shows the total number of dependents (people aged 0–14 plus people aged over 65) per hundred people in the workforce (number of people aged 15–64). The number can also be expressed as a percent. So, the total dependency ratio for the world in 1950 was 64.8% of the workforce.

As of 2010, Japan and Europe had high aged dependency ratios (that is over 65 as % of workforce) compared to other parts of the world.[8] In Europe 2010, for every adult aged 65 and older there are approximately four working age adults (15-64); This ratio (one:four, or 25%) is expected to decrease to one:two, or 50%, by 2050.[9] An aging population is caused by a decline in fertility and longer life expectancy. The average life expectancy of males and females are expected to increase from 79 years in 1990 to 82 years in 2025.[10] The dependency amongst Japan residents aged 65 and older is expected to increase which will have a major impact on Japan's economy. 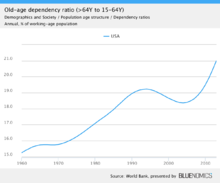 A high dependency ratio can cause serious problems for a country if a large proportion of a government's expenditure is on health, social security & education, which are most used by the youngest and the oldest in a population. The fewer people of working age, the fewer the people who can support schools, retirement pensions, disability pensions and other assistances to the youngest and oldest members of a population, often considered the most vulnerable members of society. The ratio of old (usually retired) to young working people is called old age dependency ratio (OADR) or just dependency ratio.[12]

Nevertheless, the dependency ratio ignores the fact that the 65+ are not necessarily dependent (an increasing proportion of them are working) and that many of those of 'working age' are actually not working. Alternatives have been developed', such as the 'economic dependency ratio', but they still ignore factors such as increases in productivity and in working hours. Worries about the increasing (demographic) dependency ratio should thus be taken with caution.[13]

While OADRs or LFDRs provide reasonable measures of dependency, they do not account for the fact that middle-aged and educated workers are usually the most productive. Hence the productivity weighted labor force dependency ratio (PWLFDR) may be a better metric to determine dependency. The PWLFDR is the ratio of inactive population (all ages) to active population (all ages), weighted by productivity for education level. Interestingly, while OADRs or LFDRs can change substantially, the PWLFDR is predicted to remain relatively constant in countries like China for the next couple of decades. PWLFDR assessments recommend to invest in education and life-long learning and child health to maintain social stability even when populations age.[12]

Migrant labor dependency ratio (MLDR) is used to describe the extent to which the domestic population is dependent upon migrant labor.[6][14]

Impact on savings and housing markets

High dependency ratios can lead to long-term economic changes within the population such as saving rates, investment rates, the housing markets, and the consumption patterns. Typically, workers will start to increase their savings as they grow closer to retirement age, but this will eventually affect their long-term interest rates due to the retirement population increasing and the fertility rates decreasing. If the demographic population continues to follow this trend, their savings will decrease while their long-term interest rates increase. Due to the saving rates decreasing, the investment rate will prevent economic growth because there will be less funding for investment projects. There is a correlation between labor force and housing markets, so when there is a high age-dependency ratio in a country, the investments in housing markets will decrease since the labor force is decreasing due to a high dependency population.[15]

The increase in the involvement of women in the work force has contributed to the working-age population which complements the dependency ratio for a country. Encouraging women to work will help decrease the dependency ratio. Because more women are getting higher education, it is less likely for them to have children, causing the fertility rates to decrease as well.

Using productivity weighted labor force dependency ratio (PWLFDR) suggests that even an aging or decreasing population can maintain a stable support for the dependent (primarily aging) population by increasing its productivity. A consequence from PWLFDR assessments is the recommendation to invest in education and life-long learning, child health, and to support disabled workers.[12]

Dependency ratios based on the demographic transition model

The dependency ratio has been criticized for ignoring that many older adults are employed, and many younger adults are not, and obscuring other trends such as improving health for older people that might make older people less economically dependent.[13] For this reason, the Office of the United Nations High Commissioner for Human Rights has characterized the metric as ageist, and recommends avoiding its use.[18] Alternative metrics, such as the economic dependency ratio (defined as the number of unemployed and retired people divided by the number of workers) do address this oversimplification, but ignore the effects of productivity and work hours.[13]