The East Coast of the United States, also known as the Eastern Seaboard, the Atlantic Coast, and the Atlantic Seaboard, is the coastline along which the Eastern United States meets the North Atlantic Ocean. Regionally, the term refers to the coastal states and area east of the Appalachian Mountains that have shoreline on the Atlantic Ocean, from north to south, Maine, New Hampshire, Massachusetts, Rhode Island, Connecticut, New York, New Jersey, Delaware, Maryland, Virginia, North Carolina, South Carolina, Georgia, and Florida.[2]

The place name "East Coast" derives from the idea that the contiguous 48 states are defined by two major coastlines, one at the western edge and one on the eastern edge. Other terms for referring to this area include the "Eastern Seaboard" ("seaboard" being American English for coast), "Atlantic Coast", and "Atlantic Seaboard" (because the coastline lies along the Atlantic Ocean).

The 14 states that have a shoreline on the Atlantic Ocean are, from north to south, Maine, New Hampshire, Massachusetts, Rhode Island, Connecticut, New York, New Jersey, Delaware, Maryland, Virginia, North Carolina, South Carolina, Georgia, and Florida.[2] In addition, Pennsylvania and the District of Columbia border tidal arms of the Atlantic (the Delaware River and the Potomac River, respectively). The states of Alabama, Mississippi, Louisiana, and Texas (via the Gulf of Mexico), as well as the territories of Puerto Rico, the US Virgin Islands and Navassa Island (the latter only bordering the Caribbean Sea) have Atlantic coastline, but are not included in the definition.

Although Pennsylvania, Vermont, and West Virginia have no Atlantic coastline, they are grouped with the Eastern Seaboard states because of their locations in the Mid-Atlantic, New England, and the Old South,[3] and their history as part of the land base of the original Thirteen Colonies (viz. the Colony of New Hampshire, the Colony of New York, and the Colony of Virginia). The Eastern Panhandle of West Virginia is drained by the Potomac River into Chesapeake Bay.

The original Thirteen Colonies of Great Britain in North America all lay along the East Coast.[a]

Two additional U.S. states on the East Coast were not among the original Thirteen Colonies: Maine (became part of the English colony of Massachusetts in 1677)[4] and Florida (part of New Spain until 1821, though held by the British from after the end of the French and Indian War until 1781). Florida's written history begins with the arrival of Europeans; the Spanish explorer Juan Ponce de León in 1513 made the first textual records. The state received its name from this Spanish conquistador, who called the peninsula La Pascua Florida in recognition of the verdant landscape and because it was the Easter season, which the Spaniards called Pascua Florida (Festival of Flowers).[5]

The Middle Colonies (New Jersey, Pennsylvania, New York, and Delaware) had been owned by the Dutch as New Netherland, until they were ceded to the English in the mid- to late 17th century.[citation needed]

South Mountain in Pennsylvania with Allentown in the foreground, December 2010

The region from northern Maine and Upstate New York south to southern Connecticut, most of northern New Jersey, and western Maryland has a humid continental climate (Dfa/Dfb), with warm-to-hot summers, and cold and snowy winters, with at least one month averaging below freezing, and four to seven months warmer than 50°F. The area from Long Island and New York City south to southern Delaware and western North Carolina has a temperate climate (Cfa/Do in the Trewartha climate classification), with long and hot summers and at least one month over 22°C (71.6°F,) cool winters with all months over freezing, and six to seven months above 50°F. [1]

The area from the southern Delmarva Peninsula, SE Virginia, and central NC south to central Florida is subtropical (Cfa), with hot and rainy summers, mild and drier winters, and eight to twelve months above 50°F. Around south-central Florida southward (from the line from Stuart to Fort Myers south through the Florida Keys) exists a tropical climate, which is usually frost-free, is warm to hot all year, and has all months averaging above 18°C (64.4°F). [2]

The least common climate on the East Coast is the oceanic (Cfb/Do), which is only found on Block Island and Nantucket and in areas of the southern Appalachian Mountains. This zone has all monthly averages between 0 and 22°C and six to seven months above 50°F.

Seasonally, average monthly precipitation ranges from a slight late fall (November) maximum from Massachusetts northward (as at Portland, Maine), to a slight summer maximum in the Mid-Atlantic states from southern Connecticut south to Virginia (as at Wilmington, Delaware and Norfolk, Virginia), to a more pronounced summer maximum from Cape Hatteras, North Carolina, southward along the Southeastern United States coast to Savannah, Georgia. The Florida peninsula has a sharp wet-summer/dry-winter pattern, with 60 to 70% of precipitation falling between June and October in an average year and a dry, and sunny late fall, winter, and early spring.

Although landfalls are rare, the Eastern Seaboard is susceptible to hurricanes in the Atlantic hurricane season, officially running from June 1 to November 30, although hurricanes can occur before or after these dates.[6] Hurricanes Hazel, Hugo, Bob, Isabel, Irene, and Sandy, and most recently Florence, Isaias, Henri, and Ida are some of the more significant storms to have affected the region.[3]

The East Coast (except for eastern Maine) is a low-relief, passive margin coast.[7] It has been shaped by the Pleistocene glaciation in the far northern areas in New England, with offshore islands such as Nantucket, Martha's Vineyard, Block Island, and Fishers Island. From around northern New Jersey southward, the coastal plain broadens southwards, separated from the Piedmont region by the Atlantic Seaboard fall line of the East Coast rivers, often marking the head of navigation and prominent sites of cities. The coastal areas from Long Island south to Florida are often made up of barrier islands that front the coastal areas, with the long stretches of sandy beaches. Many of the larger capes along the lower East Coast are in fact barrier islands, like the Outer Banks of North Carolina and Cape Canaveral, Florida. The Florida Keys are made up of limestone coral and provide the only coral reefs on the US mainland. 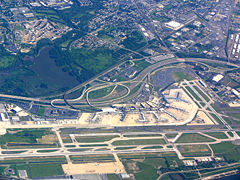 The primary Interstate Highway along the East Coast is Interstate 95, completed in 2018,[9][10] which replaced the historic U.S. Route 1 (Atlantic Highway), the original federal highway that traversed all East Coast states, except Delaware.[11] By water, the East Coast is connected from Boston, Massachusetts to Miami, Florida, by the Intracoastal Waterway, also known as the East Coast Canal, which was completed in 1912.[12][13] Amtrak's Downeaster and Northeast Regional offer the main passenger rail service on the Seaboard. The Acela Express offers the only high-speed rail passenger service in the Americas. Between New York and Boston the Acela Express has up to a 54% share of the combined train and air passenger market.[14][15] 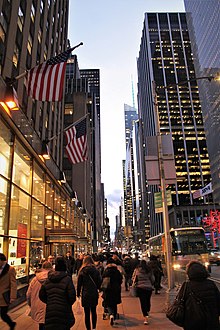 As the first spot in the United States that immigrants arrived and the close proximity of Europe, the Caribbean and Latin America, the East Coast is home to a diverse population and home to multi-cultures when compared to the rest of the US. From the strong Latin culture in southern Florida and New York City, to the 200-year-old Gullah culture of the low country coastal islands of Georgia and South Carolina, to the many historic cities in the Middle Atlantic where a strong English, German, Italian, Irish, and French culture are present, the East Coast is significantly more diverse than the rest of the United States. Numerous Chinatowns in New York City, and Little Havana in Miami, are examples of such cultural centers in the bigger cities.

Aerial view of exurban Monroe Township, Middlesex County, New Jersey housing tracts in 2010. Since then, significant new housing construction is rendering an increasingly affluent and suburban environment to Monroe Township, while maintaining the proximity to New York City sought by Indian Americans in this township with the fastest-growing Asian Indian population in the Western Hemisphere.

The East Coast is home to much of the political and financial power of the United States, as well as the center for resort and travel destinations in the United States. New York City is the largest city and financial center of the world. Seventy-one of the world's Fortune 500 companies have their corporate headquarters in New York City, while Midtown Manhattan with 400 million square feet of office space in 2018, is the largest central business district in the world. Washington, D.C. is the capital and political nerve center of the United States. Many organizations such as defense contractors, civilian contractors, nonprofit organizations, lobbying firms, trade unions, industry trade groups and professional associations have their headquarters in or near Washington, D.C., in order to be close to the federal government.