Term describing a disease which is constantly present in a given area
This article is about the epidemiological meaning of "endemic". For the ecological meaning, see Endemism. 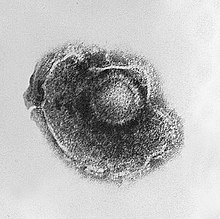 In epidemiology, an infection is said to be endemic (from the Greek ἐν, en, "in, within" and δῆμος, demos, "people") in a population when that infection is constantly maintained at a baseline level in a geographic area without external inputs.[1] For example, chickenpox is endemic (steady state) in the United Kingdom, but malaria is not. Every year, there are a few cases of malaria reported in the UK, but these do not lead to sustained transmission in the population due to the lack of a suitable vector (mosquitoes of the genus Anopheles). While it might be common to say that AIDS is "endemic" in some countries, meaning found in an area, this is a use of the word in its etymological, rather than epidemiological or ecological, form.

For an infection that relies on person-to-person transmission, to be endemic, each person who becomes infected with the disease must pass it on to one other person on average. Assuming a completely susceptible population, that means that the basic reproduction number (R0) of the infection must equal one. In a population with some immune individuals, the basic reproduction number multiplied by the proportion of susceptible individuals in the population (S) must be one. This takes account of the probability of each individual to whom the disease may be transmitted being susceptible to it, effectively discounting the immune sector of the population. So, for a disease to be in an endemic steady state it is:

In this way, the infection neither dies out nor does the number of infected people increase exponentially but the infection is said to be in an endemic steady state. An infection that starts as an epidemic will eventually either die out (with the possibility of it resurging in a theoretically predictable cyclical manner) or reach the endemic steady state, depending on a number of factors, including the virulence of the disease and its mode of transmission.

If a disease is in an endemic steady state in a population, the relation above allows us to estimate the R0 (an important parameter) of a particular infection. This in turn can be fed into a mathematical model for the epidemic.