Results of human habitation of California
This article is about the human impact on the environment. For a description of natural features, see Ecology of California.

California is on the western coast of the United States. 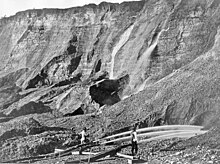 Gold miners excavate an eroded bluff with jets of water at a placer mine in Dutch Flat, California sometime between 1857 and 1870. 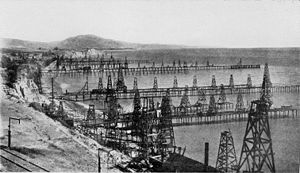 20th century petroleum extraction helped the city of Los Angeles become one of the largest in the United States.

San Francisco Bay remained the focus of a railway network extending north and south until Atchison, Topeka and Santa Fe Railway completed a transcontinental rail link to Los Angeles and San Diego in 1885. Eastbound rail shipment of citrus began in 1890. Petroleum was discovered in 1892, and the first offshore drilling occurred at Summerland Oil Field in 1896.[4] Hollywood's film industry and shift of the United States Navy Battle Fleet home port to San Pedro in 1919 accelerated growth of southern coastal cities to 36% of the state population by 1920.[2] 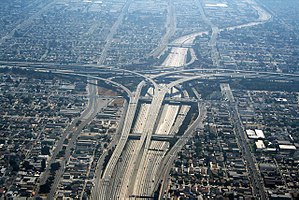 A majority of Californians live, commute, and work in the hazy web of Southern California freeways. 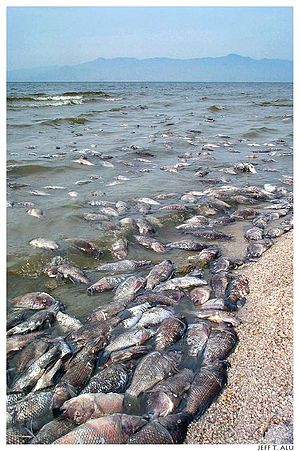 The Salton Sea is an endorheic basin of evaporating irrigation return flows.

Unsuccessful gold prospectors soon recognized California's agricultural potential and their mining equipment began adjusting timing and location of stream flows to increase food production. Mono Lake and Tulare Lake shrank as flows were diverted to irrigation.[7] Little Lake was drained to form the town of Willits, California in 1874,[8] and Laguna de Santa Rosa was drained to bring rail service to Sonoma County.[9] The Klamath Project drained large shallow lakes for conversion to cropland in 1905. The Potter Valley Project diverted water from the Eel River to the Russian River in 1906 to provide hydroelectric power to Ukiah, California; and Lake Pillsbury was formed behind Scott Dam in 1922 to increase summer flows allowing irrigation of Potter Valley.[10]

U.S. Bureau of Reclamation public works projects included Friant Dam on the San Joaquin River in 1942 and Shasta Dam on the Sacramento River in 1945. These dams reduced winter flooding and summer salinity of the Sacramento-San Joaquin Delta encouraging crop production on drained wetlands. The Central Valley Project continued with Folsom Dam on the American River, Trinity Dam on the Trinity River, and Oroville Dam on the Feather River. Construction of the California Aqueduct has been completed to Southern California except for a Peripheral Canal which might restore pre-dam delta salinity concentrations.[11]

A major fraction of water transferred to southern California is used for production of food. Irrigation return flows like the New River may contain pesticides and elevated concentrations of dissolved minerals, and may accumulate in endorheic basins like Kesterson Reservoir. The Salton Sea was enlarged by diversion of water from the Colorado River.[12] 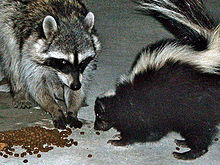 Raccoon and skunk eating cat food in a Hollywood back yard