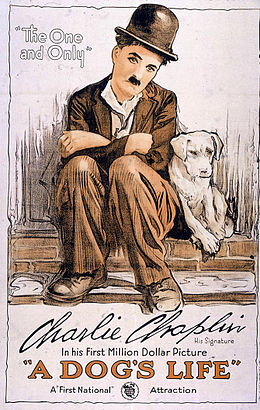 Poster for A Dog's Life (1918), Charlie Chaplin's first film under his $1 million contract with First National 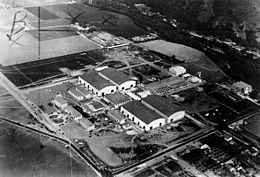 The First National Exhibitors' Circuit was founded in 1917 by the merger of 26 of the biggest first-run cinema chains in the United States. It eventually controlled over 600 cinemas, more than 200 of them first-run houses (as opposed to the less lucrative second-run or neighbourhood theatres to which films moved when their initial box office receipts dwindled).

First National was the brainchild of Thomas L. Tally, who was reacting to the overwhelming influence of Paramount Pictures, which dominated the market. In 1912, he thought that a conglomerate of theatres throughout the nation could buy or produce and distribute its own films. In 1917 Tally and J. D. Williams formed First National Exhibitors' Circuit.[citation needed]

The first film released through First National was the 1916 British film, The Mother of Dartmoor.[citation needed] Between 1917 and 1918, the company made contracts with Mary Pickford and Charlie Chaplin, the first million-dollar deals in the history of film.[citation needed] Chaplin's contract allowed him to produce his films without a set release schedule. However, the production of the feature film The Kid ran so long that the company started to complain. To address their concerns, Chaplin invited the exhibitors to the studio, and they were so impressed by the project and charmed by the players, especially co-star Jackie Coogan, that they agreed to be patient. That patience was ultimately rewarded when The Kid became a major critical and box office success.[1] First National's distribution of films by independent producers is credited with launching careers including that of Louis B. Mayer.[2]

Adolph Zukor of Paramount Pictures was threatened by First National's financial power and its control over the lucrative first-run theatres, and decided to enter the cinema business as well. With a $10 million investment, Paramount built its own chain of first-run movie theatres after a secret plan to merge with First National failed.[citation needed]

Associated First National Pictures expanded from only distributing films to producing them in 1924 and changed its corporate name to First National Pictures, Inc.[5] It built its 62-acre (25 ha) studio lot in Burbank in 1926.[6] The Motion Picture Theatre Owners of America and the Independent Producers' Association declared war in 1925 on what they termed a common enemy—the "film trust" of Metro-Goldwyn-Mayer, Paramount, and First National, which they claimed dominated the industry not only by producing and distributing motion pictures but also by entering into exhibition as well.[7] 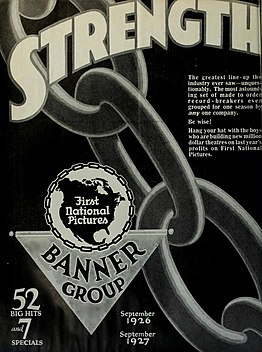 Although both studios produced "A" and "B" budget pictures, generally the prestige productions, costume dramas, and musicals were made by Warner Bros., while First National specialized in modern comedies, dramas, and crime stories. Short subjects were made by yet another affiliated company, The Vitaphone Corporation (which took its name from the sound process).

In July 1936, stockholders of First National Pictures, Inc. (primarily Warner Bros.) voted to dissolve the corporation and distribute its assets among the stockholders in line with a new tax law which provided for tax-free consolidations between corporations.[12]

From 1929 to 1958, most Warner Bros. films and promotional posters bore the combined trademark and copyright credits in the opening and closing sequences "A Warner Bros.–First National Picture".[13]