Folsom Lake is a reservoir on the American River in the Sierra Nevada foothills of California, United States.

It is located within Placer, El Dorado, and Sacramento Counties. It is about 25 mi (40 km) northeast of Sacramento. The lake surface area is 11,500 acres (4,700 ha), its elevation is 466 ft (142 m), and it has 75 mi (121 km) of undulated shoreline. Folsom Lake with its surrounding Folsom Lake State Recreation Area is one of the most visited parks in the California park system.

The California Office of Environmental Health Hazard Assessment has developed a safe eating advisory for Folsom Lake based on levels of mercury found in fish caught here.[2]

The Folsom Lake reservoir is formed by Folsom Dam, built in 1955 to control and retain the American River. The dam and reservoir are part of the Folsom Project, which also includes the Nimbus afterbay reservoir and dam facilities. The Folsom Project, operated by the United States Bureau of Reclamation, is part of the Central Valley Project, a multipurpose project that provides flood control, hydroelectricity, drinking water, and water for irrigation. 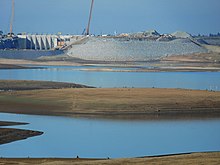 Folsom Lake during the 2011–2017 California drought

During the drought of late 2013, part of the 2012–13 North American drought, the town known as Mormon Island reappeared 58 years after being submerged under Folsom Lake, with stone walls from some of the outlying areas being revealed by the shrinking lake.[4]

The Folsom Lake State Recreation Area (FLSRA) surrounds the reservoir, and is managed by the California Department of Parks and Recreation.[7] The lake supports a large number of recreational activities. Aquatic activities account for 85% of all recreation visits to the area, which are designated for hiking, camping, and biking. The lake is also commonly used for fishing, boating, water skiing, and horseback riding.[8]

The majority of the FLSRA is owned by the US Department of the Interior Bureau of Reclamation, and is managed by the state parks.

The recreation area is located at the union of the north and south forks of the American River. About 20,000 acres of water and land are within the boundaries of the FLSRA; it spans parts of El Dorado, Placer, and Sacramento Counties, as well as the City of Folsom.

A number of mammals inhabit the lake area, including coyotes, gray foxes, rabbits, skunks, raccoons, ground squirrels, black-tailed deer, and opossums, and on occasion, mountain lions, bobcats, and black bears have been sighted.

For October 1 through May 31, the dam and lake are used to prevent flooding on the lower end of the American River. The Sacramento Basin is notorious for flooding, and the dam helps relieve winter storm runoff and snow melt from the Sierra.

It is a major component of the American River Watershed. During the summer, water is released to prevent saltwater intrusion in the San Joaquin Delta. These releases maintain water quality and keep ideal water temperatures for anadromous fish species such as Chinook salmon, steelhead, and American shad. Several of these species are of primary concern due to their decline in numbers and spawning habitat destruction.

Water in Lake Folsom is also used for drinking water and power generation throughout the year. As a reservoir, the water levels in the lake fluctuate between 440 ft in the early summer and 405 ft in the early winter. In drought years, the water levels can be drawn below 400 ft. Some of the factors that affect these levels include precipitation, downstream flows, and fishery needs.