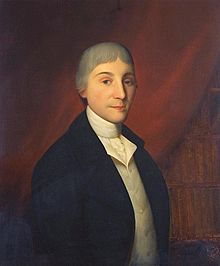 Solomon Drowne, a prominent American physician, academic and surgeon during the American Revolution 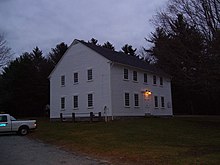 Foster Town Building, c. 1796, the oldest government meeting house of its type in the United States where town meetings have been held continuously since 1801 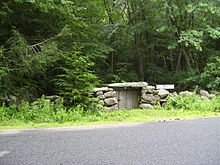 Foster is a town in Providence County, Rhode Island, in the United States. The population was 4,469 at the 2020 census.

Foster was originally settled in the 17th century by British colonists as a farming community. In the year 1662, William Vaughan, Zachariah Rhodes, and Robert Wescott, purchased from the Indians a large tract of land called West Quanaug, bordering on Providence. The 'West Quanaug purchase' included nearly the whole southern half of the town of Foster. The first English settler was allegedly Ezekiel Hopkins. Many settlers from Newport were active in the town in the 18th century. Shortly before the incorporation of the town, Foster's first church, a Calvinist Baptist congregation was founded. Shortly afterwards, Six Principle Baptist and Free Will Baptist congregations were founded.[3]

Foster was incorporated with Scituate, Rhode Island in 1730, forming the western section of that township, and remained part of Scituate until 1781, when it was split off as a distinct and separate township. Foster derived its name from U.S. Senator Theodore Foster.[4] Mr. Foster presented the town with a library. Some of the library's original books and town records are still preserved. U.S. Senator Nelson Aldrich was born in Foster in 1841. Senator Aldrich was instrumental in starting the U.S. Federal Reserve Board.

In the 1920s the Ku Klux Klan was active in the area. The largest Klan rally north of the Mason–Dixon line was held in Foster on the Old Home Day grounds in 1924 with 8,000 in attendance and U.S. Senator J. Thomas Heflin of Alabama speaking. Foster remained a bastion of racial and religious bigotry for more than half a century.[5]

Climate in this area has mild differences between highs and lows, and there is adequate rainfall year-round. According to the Köppen Climate Classification system, Foster has an Oceanic climate, abbreviated "Cfb" on climate maps.[6]

There were 1,535 households, out of which 36.0% had children under the age of 18 living with them, 68.5% were married couples living together, 6.8% had a female householder with no husband present, and 21.9% were non-families. 17.1% of all households were made up of individuals, and 6.3% had someone living alone who was 65 years of age or older. The average household size was 2.77 and the average family size was 3.14.

Foster's Capt. Isaac Paine Elementary School, has the top spot for reading proficiency according to the New England Common Assessment Program, or NECAP, exams. 82 percent of its students attained proficiency, the state leader in that testing category.[citation needed]

Foster is home to the Foster Town House. Built in 1796 and in use to this day,[10] the Foster Town House is the oldest government meeting house of its type in the United States.[11] Foster also contains Rhode Island's only authentic covered bridge, the Swamp Meadow Covered Bridge.[12][note 1] Built in 1994 by Jed Dixon, a Foster resident, it is a reproduction of an early-19th-century specimen. It is the only covered bridge in Rhode Island located on a public road.[13] Jerimoth Hill, the highest point of elevation in Rhode Island, is located in Foster.[14]