An aerial photograph of Foster City in 2013

Foster City is a city located in San Mateo County, California. The 2020 census put the population at 33,805,[6] an increase of more than 10% over the 2010 census figure of 30,567. Foster City is sometimes considered to be part of Silicon Valley for its local industry and its proximity to Silicon Valley cities.[8][9] Foster City is one of the United States’ safest cities,[10] with an average of one murder per decade.[11]

Foster City was founded in the 1960s, built on the existing Brewer Island in the marshes of the San Francisco Bay on the east edge of San Mateo, enlarged with engineered landfill. The city was named after T. Jack Foster, a real estate magnate who owned much of the land comprising the city and who was instrumental in its initial design. His firm, Foster Enterprises, now run by his descendants, relocated to San Mateo in 2000[12] and is still active in real estate affairs throughout the San Francisco Bay Area.

Forbes ranked Foster City #10 on their 2009 list of "America's Top 25 Towns to Live Well." Money has also recognized Foster City multiple times as one of the "Best Places to Live."

In the United States House of Representatives, Foster City is in California's 14th congressional district, represented by Democrat Jackie Speier.[19]

As of December 2021, Foster City's Mayor is Richa Awasthi. Other councilmembers include Sam Hindi, Jon Froomin, and Patrick Sullivan. Froomin was elected to office after former councilmember Herb Perez was recalled by a majority of Foster City voters. Perez was the first city councilperson to be recalled since 1977.

Former Mayor Sam Hindi was the first Palestinian-American Mayor in the history of California. Councilmember Sanjay Gehani was the first Mayor for Foster City of Indian descent. Current (2022) Mayor Richa Awashi is the first female minority Mayor and first woman Immigrant to be Foster City's Mayor. [20] [21]

The city is served by the Peninsula Library System. 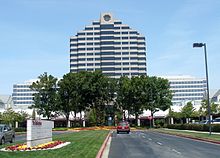 Around 1993 Visa Inc. began consolidating various scattered offices in San Mateo, California to a location in Foster City.[25] Visa's headquarters were in Foster City, and Visa became Foster City's largest employer. Visa owns four buildings at the intersection of Metro Center Boulevard and Vintage Park Drive. As of 2009 it employed about 3,000 people at the complex. During that year Visa signed a 10-year lease agreement for the top three floors of 595 Market Street in San Francisco and moved its top executives there. Visa continued to keep employees at the Foster City offices.[26] As of 2009, after the headquarters move, the Foster City facilities remained the company's center of employment, and those buildings housed 2,400 employees as of 2009.[27]

Other companies with headquarters in Foster City:

According to the city's 2021 Comprehensive Annual Financial Report,[28] the top employers in the city are:

Boating is a popular activity in the city's lagoons. 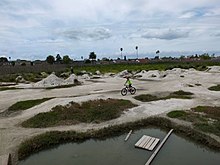 Foster City's Werder Pier is a remainder of the original expanse of the San Mateo–Hayward Bridge. It is also one of the longest and oldest piers in California. Unfortunately, due to much needed repair, the once popular fishing pier is no longer in operation.

Peter Thiel, founder of PayPal, was raised in Foster City.

The movie Over the Edge is based on events occurring in Foster City and chronicled in a 1973 article titled "Mousepacks: Kids on a Crime Spree" in the San Francisco Examiner.

Foster City TV broadcasts a variety of programs related to the operation of and life in Foster City. Foster City TV provides programming through a dedicated government-access television (GATV) channel.