Metropolitan Fresno, officially Fresno–Madera, CA CSA, is a metropolitan area in the San Joaquin Valley, in the United States, consisting of Fresno and Madera counties. It is the third-largest metropolitan region in Northern California, behind the San Francisco Bay Area and Greater Sacramento. It is also the 49th-largest CSA in the U.S. as of 2010 census.[1][2]

Metropolitan Fresno is anchored by Fresno, the fifth-largest city in California and the 35th-largest in the United States. The metropolitan area is located in the Central Valley, which is one of the world's most productive agricultural regions. It has a large agricultural economy despite being increasingly urbanized. In more recent years, statewide droughts in California have further strained both the Fresno metropolitan area's and the entire Central Valley's water security.[3][4]

Fresno is the largest city in the area and in the Central Valley. Along with Sacramento, it is the economic center of California's interior and is one of the fastest-growing cities in the United States, with the region having a growth of over 20% since 2000. Fresno is a major transportation hub for visitors heading to Yosemite, Kings Canyon and Sequoia National Parks, which are 60 mi (97 km) and 75 mi (121 km) away from Fresno respectively with Fresno the nearest major city from the parks. The United States Military has a heavy presence in the Fresno area and numerous divisions are based in Metropolitan Fresno, including the 40th Aviation Brigade and 144th Fighter Wing.[5][6] Fresno County is the largest agricultural county and has the largest concentration of agriculture than any other county in the United States.

Madera County is primarily an agricultural county as well but its cities serve as suburbs of Fresno. Since 2010, statewide droughts in California have further strained both the Fresno metropolitan area's and the entire Central Valley's water security.[7][8]

Metropolitan Fresno is primarily located in the San Joaquin Valley, which in turn is a part of the larger Central Valley region of California, one of the world's most important agricultural areas. The eastern portions of the area border the Sierra Nevada mountains and the western portions border the Coast Ranges, thus giving the edges of the area higher elevations than the inner valley areas. Several waterways traverse the region, including the San Joaquin and Kings rivers, the Delta-Mendota and Madera canals, and the California Aqueduct, providing water to crops. The California Aqueduct is one of the world's longest artificial aqueducts.[9]

Metropolitan Fresno has a Mediterranean climate (Köppen Csa) with some semi-arid factors due to its interior location (Köppen Bsh), with mild, moderately wet winters and hot and dry summers. December is the coolest month, with an average of 53.4 °F (11.9 °C) during the day in downtown Fresno while summer temperatures can reach 110 °F (43.3 °C) or more. Thick tule fog is present in the valley areas during the winter. Rainfall is most common between December and April while snowfall is sometimes experienced in the higher mountain elevations. 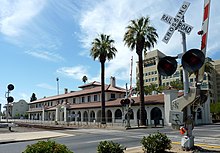 The Santa Fe Passenger Depot is the largest train station in Metropolitan Fresno.

Owing to its gateway location to numerous national parks as well as being in between the larger Greater Los Angeles and San Francisco Bay Area and Greater Sacramento regions, Metropolitan Fresno serves as a transportation hub in the California interior. However, unlike the larger metropolitan areas of California, Metropolitan Fresno does not have a large public transit system but is served by numerous freeways and highways.

The Fresno Yosemite International Airport is the only commercial airport in the region and is a major gateway into Yosemite National Park. Additionally, there are several general aviation airports in the area, including Fresno Chandler Executive Airport, Firebaugh Airport, Sierra Sky Park Airport and Madera Municipal Airport.

Unlike the other metropolitan areas of California, Metropolitan Fresno has historically been a strong Republican stronghold and the region reflects the Coastal California and interior California divide in which coastal areas and urbanized areas of California tend to lean Democratic while interior areas tend to lean Republican. Exceptions to this are Orange County in Greater Los Angeles, which has been a Republican stronghold since the 1940s, and most of Greater Sacramento, which is a politically competitive area where the major parties are often divided in pluralities although recently there have been Democratic majorities.[12] Metropolitan Fresno has begun to become a politically competitive region as well, as in the 2008 presidential election, the region was split with Fresno County going for Barack Obama with the majority of the votes, while John McCain carried Madera County with a comfortable margin. Locally, Democratic concentrations are found in much of Fresno and most non-agricultural suburbs while Republican concentrations are found in Madera County and most rural towns.