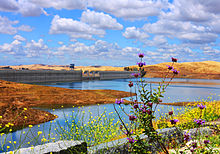 Friant Dam is a concrete gravity dam on the San Joaquin River in central California in the United States, on the boundary of Fresno and Madera Counties. It was built between 1937 and 1942 as part of a U.S. Bureau of Reclamation (USBR) water project to provide irrigation water to the southern San Joaquin Valley. The dam impounds Millerton Lake, a 4,900-acre (2,000 ha) reservoir about 15 miles (24 km) north of Fresno.

The valley in which Friant Dam and Millerton Lake now lie was once the location of the historic town of Millerton. Millerton was the first county seat of Fresno County.[5][6] In 1880, the first dam on the San Joaquin River was constructed by the Upper San Joaquin Irrigation Company roughly on the present site of Friant Dam. Built of local rock, the dam was an 800-foot (240 m) long, 6-foot (1.8 m) tall structure designed to divert water for the irrigation of 250,000 acres (100,000 ha). The project was abandoned in the wake of floods that destroyed the dam two years later.[7]

Friant Dam was originally proposed in the 1930s as a main feature of the Central Valley Project (CVP), a federal water project that would involve building an expansive system of dams and canals on the rivers of the Central Valley to provide water for agriculture, with secondary purposes of flood control, municipal supply, and hydroelectric power generation.[8] The CVP was authorized by the 1935 Rivers and Harbors Act, while $20 million of initial funding for Friant Dam was provided by the Emergency Relief Appropriation Act of 1935.[9]

Initial surveys of the Friant Dam site were carried out in November 1935 and continued through early 1936. In January 1938, a worker's camp was established near the town of Friant to house the laborers that would ultimately work on the dam. In the middle of the Great Depression, the Friant Dam site saw a huge influx of job seekers, many of whom had to live further away in surrounding cities. More than 50,000 people attended the groundbreaking of the dam on November 5, 1939 in a celebration that is now known as "one of the greatest in San Joaquin Valley history".[10]

Construction of Friant Dam began with blasting and excavation of the dam site to remove more than 1,200,000 cubic yards (920,000 m3) of loose material above the bedrock. Before any concrete was laid on the dam's main wall, the underlying rock was extensively grouted to fill in 725 holes and seams that might otherwise cause instability in the foundation. The concrete used in the dam's construction was made from sand and gravel excavated from the San Joaquin River floodplain about 3 miles (4.8 km) below the dam to form Lost Lake. Notably, more than 5,400 ounces (150 kg) of placer gold – worth $176,000 at the time – were uncovered in the excavation site.[11] A branch line of the Southern Pacific Railroad delivered this material to a concrete mixing plant, which could produce up to 6,000 cubic yards (4,600 m3) of concrete per hour, directly adjacent to the construction site.[12] In July 1940, the San Joaquin River was diverted through a wooden flume so that work on the foundations could begin.[11]

On July 29, the first concrete was poured into the main body of Friant Dam. In order to keep the structure in line, the dam was built in a series of blocks or forms, each measuring 50 feet (15 m) square. Concrete was placed via a massive steel trestle system 210 feet (64 m) high and 2,200 feet (670 m) long, along which ran small powered railcars that delivered buckets of concrete from the mixing plant. Two gantry cranes lifted the buckets from the cars and poured them onto the forms. In summer 1941, the labor force reached a peak of 1,500, and the monthly record for concrete placement, at 228,000 cubic yards (174,000 m3), was set in August.[13]

U.S. government photograph of several re-interred Native Americans whose graves had been in the dam's planned reservoir

During the dam's construction several Native American burial sites had their graves removed and re-interred.

The workforce scrambled to complete the main wall of the dam after an act of the War Production Board (WPB) suspended resources in order to assist U.S. military efforts in World War II. The dam was topped out on June 16, 1942, just under two years after the first concrete was poured. However, the spillway gates, the water release valves and the two irrigation canals Friant was intended to support remained unfinished in the wake of the WPB's order.[11]

The war, however, did not completely halt construction. Less than a year later, the WPB "[determined] the completion of the Madera Canal and the installation of valves at the Friant Dam, necessary for war-time food and fiber production" – allowing construction to resume on a limited scale.[11] A pair of control valves were borrowed from Hoover Dam, allowing the closure of the river outlets and Millerton Lake began to fill on February 21, 1944. Work on the Madera Canal, the smaller of the two irrigation canals serviced by Friant Dam (the other, the Friant-Kern Canal, would not be completed for another four years), was completed in 1945 and water ran for its entire length for the first time on June 10, with irrigation deliveries commencing one month later.[11]

The dam was formally dedicated on July 9, 1949 by California governor Earl Warren, who declared that the water furnished by Friant Dam and its canals would help the San Joaquin Valley to "become a modern Eden" as water was released into the partially completed Friant-Kern Canal for the first time.[14] More than three thousand people, mostly residents of the San Joaquin Valley, attended the ceremonies.[15]

[The dam is] but a lifeline to preserve and enhance our American civilization. This is a line of creation, built to unlock the fertility of the rich soil, to resist drought, to overcome floods, to provide outdoor recreation, and to generate cheap power that will improve the living conditions of millions of our citizens."
– Secretary of the Interior Harold Ickes at Friant Dam dedication[15] 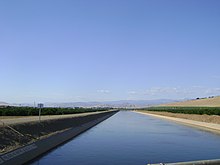 The Friant-Kern Canal, the larger of the two canals supplied with water from Friant Dam

Friant Dam's primary purpose is to capture the fluctuating flows of the San Joaquin River and divert the water for irrigation through the Friant-Kern and Madera Canals. The Friant-Kern Canal is 151.8 mi (244.3 km) long, extending south from the dam to the Kern River near Bakersfield, and has an initial diversion capacity of 5,000 cubic feet per second (140 m3/s); the 35.9-mile (57.8 km) Madera Canal, which has a capacity of up to 1,000 cubic feet per second (28 m3/s), travels north from the dam to the Chowchilla River. Together, these canals provide irrigation water to some 837,000 acres (339,000 ha) of the San Joaquin Valley. In 1990, farmers who received their water from Friant Dam produced more than $1.9 billion worth of 90 different kinds of crops.[2]

The dam is also used to generate up to 25 megawatts (MW) of hydroelectric power. The penstock releasing water into the Friant-Kern Canal is fitted with a Kaplan turbine with a capacity of 15 MW, and the Madera Canal penstock is equipped with a smaller 8 MW turbine. The smallest hydroelectric generator, with a capacity of 2 MW, is located at the outlet works on the base of the dam and produces power from water releases that serve local farms along the San Joaquin River directly downstream from Friant Dam, as well as releases to a fish hatchery below the dam and for wildlife management purposes.[4] 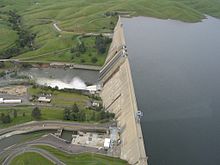 Friant Dam and Millerton Lake in 2006, filled to capacity and releasing floodwater

Another proposal to increase storage in the upper San Joaquin River basin is Temperance Flat Dam, which would be located in the San Joaquin River canyon upstream of Friant Dam and impound between 460,000 to 2,775,000 acre-feet (567,000 to 3,423,000 dam3) of water.[20] The proposed dam would stand 415 to 840 feet (126 to 256 m) high above the river, and it would capture most of the floodwater that would otherwise be spilled from Friant Dam. However, Temperance Flat has come under heavy controversy because it would flood a large scenic section of the San Joaquin River gorge, negatively affect wildlife in the river and inundate two upstream hydroelectric power plants, causing a net loss in power generation.[21] The water supplied from such a dam would be very expensive, ranging from $1000–1500 per acre foot (area farmers currently pay about $60 per acre foot). Raising Friant Dam would likely produce similar increases in the cost of irrigation water.[22]

By diverting most of the San Joaquin River for irrigation, the Friant Dam has caused about 60 miles (97 km) of the river to run dry except in high water years when floodwaters are spilled from the dam. The desiccation of the river has caused the degradation of large stretches of riverside habitat and marshes, and has nearly eliminated the historic chinook salmon run that once numbered "possibly in the range of 200,000 to 500,000 spawners annually".[23] Reduction in flows has also increased the concentration of pesticide and fertilizer runoff in the river contributing to pollution that has further impacted aquatic species.[24]

On September 13, 2006, after eighteen years of litigation, environmental groups, fisherman and the USBR reached an agreement on releasing part of the water currently diverted into the irrigation canals into the San Joaquin River in order to help restore the river and its native fish and wildlife. The first water was released on October 2, 2009 at a rate of 185 cubic feet per second (5.2 m3/s).[25] By 2014, these "restoration flows" will be increased to 302,000 acre-feet (373,000 dam3) per year, or 417 cubic feet per second (11.8 m3/s), on top of the 117,000 acre-feet (144,000 dam3) that is currently released for agricultural purposes. However, the river restoration project will cause a 12–20% reduction in irrigation water delivered from Friant Dam.[26]