Educational publishing company based in Farmington Hills, Michigan, US

Gale is an American educational publishing company based in Farmington Hills, Michigan,[2] west of Detroit. It has been a division of Cengage since 2007.

The company, formerly known as Gale Research and the Gale Group, is active in research and educational publishing for public, academic, and school libraries, and businesses. The company is known for its full-text magazine and newspaper databases, Gale OneFile (formerly known as Infotrac), and other online databases subscribed by libraries, as well as multi-volume reference works, especially in the areas of religion, history, and social science.

Founded in Detroit, Michigan, in 1954 by Frederick Gale Ruffner Jr., the company was acquired by the International Thomson Organization (later the Thomson Corporation) in 1985 before its 2007 sale to Cengage.

On October 25, 2006, Thomson Corporation announced that it intended to wholly divest the Thomson Learning division, because, in the words of Thomson CEO Richard Harrington, "it does not fit with our long-term strategic vision." Thomson has said that it expected this sale to generate approximately $5 billion. Thomson Learning was bought by a private equity consortium consisting of Apax Partners and OMERS Capital Partners for $7.75 billion and the name was changed from Thomson Learning to Cengage Learning on July 24, 2007.[7] 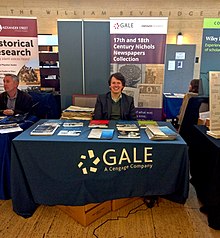 Gale at the University of London School of Advanced Study History Day, October 2017