Gilmanton is a town in Belknap County, New Hampshire, United States. The population was 3,945 at the 2020 census.[2] Gilmanton includes the villages of Gilmanton Corners and Gilmanton Ironworks. The town became well known in the 1950s after it was rumored that the popular novel Peyton Place, written by resident Grace Metalious, was based on the town.[3]

Gilmanton was incorporated in 1727. First known as "Gilmantown", the town was home to the Gilman family, originally settled at Exeter.[4] Twenty-four members of the Gilman family received land grants in the new town of Gilmanton. (Other families related to the Gilmans also received grants in the new town, including the Dudleys, the Leavitts, the Folsoms and the Coffins.)[5] At one time it was the second-largest town in the state, following Portsmouth. The original town was larger than it is now, with villages and parishes including Belmont, Gunstock Parish (Gilford), Hurricane, Tioga, Factory Village and Lakeport. A parish first called "Averytown", the site of an unprofitable iron-mining enterprise, is still known as Gilmanton Iron Works.[6]

Gilmanton Academy was incorporated in 1794, "...one of the three academies first founded in the state..."[7] In 1808 the original building burned; the second building also burned, in 1894, and was replaced with the current building, which now houses the town offices.

Gilmanton Theological Seminary was provided for by the terms of the original charter of Gilmanton Academy. Rev. Heman Rood, from New Milford, Connecticut, was the first professor in 1835. By 1841 a large, three-story brick building designed by Ammi B. Young was completed for the seminary's use.[8]

According to the United States Census Bureau, the town has a total area of 59.6 square miles (154.4 km2), of which 57.9 square miles (150.0 km2) are land and 1.7 square miles (4.4 km2) are water, comprising 2.89% of the town.[1] A natural resources inventory published in 2004 noted the town's nine town forests and other dry and wetland protected areas as well as significant plant species.[9] The highest point in Gilmanton is Mount Mack, at 1,945 feet (593 m) above sea level, on the town line with Gilford. Crystal Lake is in the east, and Shellcamp Pond is in the west. Gilmanton lies fully within the Merrimack River watershed.[10]

The town is served by four state routes: 106, 129, 107 and 140. Route 107 is part of Old Province Road, an important road in New Hampshire's early history, and Route 106 is a well-traveled connection between Laconia and Concord. Route 140 is an east-west highway leading from Tilton to Alton. The intersection NH 107 and NH 140 is at Gilmanton Corners, one of the two major villages. Gilmanton Corner (or simply "Gilmanton", as shown on topographic maps) is the location of several historic buildings, including Gilmanton Academy and Centre Congregational Church. Gilmanton Ironworks is located in the eastern part of town along NH 140, near the outlet of Crystal Lake.

There were 1,165 households, out of which 33.1% had children under the age of 18 living with them, 68.8% were married couples living together, 5.5% had a female householder with no husband present, and 22.7% were non-families. 17.2% of all households were made up of individuals, and 5.8% had someone living alone who was 65 years of age or older. The average household size was 2.62 and the average family size was 2.96. 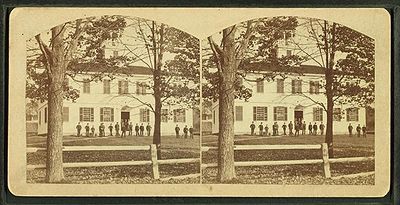