The Gold Country (also known as Mother Lode Country) is a historic region in the northern portion of the U.S. state of California, that is primarily on the western slope of the Sierra Nevada. It is famed for the mineral deposits and gold mines that attracted waves of immigrants, known as the 49ers, during the 1849 California Gold Rush.

When gold was first discovered in 1848 many people came from all over the world to find gold. The migration into California brought diseases and violence.[1] There were 500 mining camps of which 300 are still undiscovered as of today. There was 400 million dollars in gold mined between 1849 and 1855.[2] In 1942 most of the mines shut down due to World War II.[3] The transportation in Gold Country grew rapidly due to the Gold Rush. The first railroad in California ran through Gold Country.[4] There were 250 different stage coach companies formed by 1860.[4] 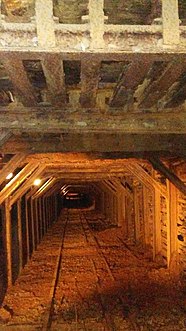 This is a photo taken looking down into the Empire Mine Shaft Grass Valley California. 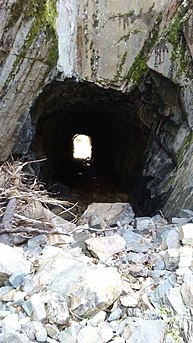 This was a hole in the mountain in La Porte, California. It was used to divert the water in Slate Creek.

The Gold Country lies on the western slope of the Sierra Nevada, reaching down to the Sacramento Valley. The oldest geology can be found along the easternmost portions of this region, closer to the Sierra Nevada summits, which formed 100 million years ago.[4] It consists of ancient sea floor and portions of islands which were added onto the western edge of North America during the late Paleozoic, about 275 million years ago. The western sections of the Mother Lode are significantly younger, from the mid-Mesozoic about 150 million years ago, and also consist of material that was solidified on the ocean floor to the continental edge. Massive intrusions of granite forced their way into these formations. After ten miles of overlying material was eroded over the last 70 million years, these intrusions became visible throughout the Sierra Nevada. Over the last 50 million years, rivers and volcanoes deposited materials; these built up in thick layers found atop many of the high ridges of the Sierra Nevada foothills.

This part of California has a Mediterranean climate like much of Italy and Spain, making wine grapes and vineyards one of the region's primary crops and industry.[citation needed] Over 100 wineries are found throughout the Gold Country. Winters are cool and wet with occasional snowfall, especially in the higher elevations of the eastern reaches up the slopes of the Sierra Nevada mountains. Winter temperatures range from the upper twenties to mid-fifties. Summers are dry and hot, with long stretches that reach triple digits. The average annual precipitation is around 30 inches (760 mm). Many dams were built in the Sierra Nevada to hold water. People in California depend on the water that comes from the Sierra Nevada mountains.[4]

California State Route 49 is the primary north–south highway through the region, passing through many historic mining communities. Major east–west highways include Interstate 80 and U.S. Route 50.

Two Amtrak routes run through the area. The eastern terminus of the Capitol Corridor is in Auburn. The California Zephyr stops in Colfax.[8]

Counties and the towns that are part of Gold Country: