Golden Gate Ferry is a commuter ferry service operated by the Golden Gate Bridge, Highway and Transportation District in San Francisco Bay, part of the Bay Area of Northern California, United States. Regular service is run to the Ferry Building in San Francisco from Larkspur, Sausalito, and Tiburon in Marin County, with additional service from Larkspur to Oracle Park and Chase Center. The ferry service is funded primarily by passenger fares and Golden Gate Bridge tolls.

Golden Gate Ferry is a different system from San Francisco Bay Ferry, which provides passenger ferry service between San Francisco and counties other than Marin.

Golden Gate Ferry began service on August 15, 1970 with the M.S. Golden Gate.[2] Service to Larkspur started in 1976. Service to Pacific Bell Park (now Oracle Park) started in 2000. Tiburon service began on March 6, 2017.[3] Service to Chase Center began in 2019 using an interim terminal located at Pier 48½.[4] A permanent Mission Bay terminal is expected to open in 2021 at the foot of 16th Street to replace the nearby interim Chase Center terminal.[5][6]

Service was reduced in March 2020 and is currently limited to weekdays only. The Larkspur route has seven round-trips, and the Sausalito and Tiburon routes have been combined with a total of two trips per direction to/from San Francisco.[8]

Golden Gate Ferry fares differ by route, passenger type, and method of payment.[9] As of July 1, 2021, fares are as follows: 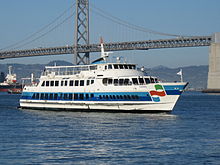 The monohull vessels are named M.S. Marin, M.S. San Francisco, and M.S. Sonoma. The Marin can carry 750 passengers, and the San Francisco and Sonoma can carry 630 passengers each. They were purchased from Philip F. Spaulding & Associates in San Diego in 1976–1977. They were originally powered by gas turbine water jets but were converted to diesel engine propeller drives in 1983–1985. More efficient diesel engines were installed in 2001-2002.[11] The Marin was refurbished from November 2006 to July 2007.[12]

The catamarans are named the M.V. Del Norte, M.V. Golden Gate, M.V. Mendocino, and M.V. Napa. The Del Norte has a capacity of 400 passengers while the other three vessels have a capacity of 450 passengers. The 1998-built Del Norte and 2001-built Mendocino were built for Golden Gate Ferry to allow faster and more frequent service than the monohull ferries. The Napa (formerly Snohomish) and Golden Gate (formerly Chinook) were purchased from Washington State Ferries in January 2009.[13]

In late 2018, Golden Gate Ferry reached an agreement to lease the MV Millennium from Rhode Island Fast Ferry for one year for $2.5 million. The Millennium allowed full service to continue while the Marin and Sonoma underwent major work and the other ferries received regular maintenance.[14] The Millennium remained in service until 2020 before returning to Rhode Island.