Probabilistic model
This article is about the representation of probability distributions using graphs. For the computer graphics journal, see Graphical Models. 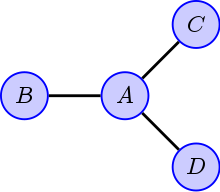 An undirected graph with four vertices.

The undirected graph shown may have one of several interpretations; the common feature is that the presence of an edge implies some sort of dependence between the corresponding random variables. From this graph we might deduce that

are all mutually independent, once

is known, or (equivalently in this case) that

for some non-negative functions 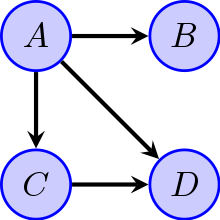 Example of a directed acyclic graph on four vertices.

If the network structure of the model is a directed acyclic graph, the model represents a factorization of the joint probability of all random variables. More precisely, if the events are

then the joint probability satisfies

is the set of parents of node

(nodes with edges directed towards

). In other words, the joint distribution factors into a product of conditional distributions. For example, in the directed acyclic graph shown in the Figure this factorization would be 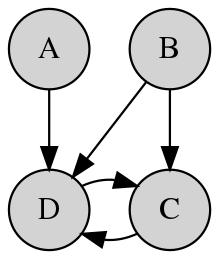 An example of a directed, cyclic graphical model. Each arrow indicates a dependency. In this example: D depends on A, B, and C; and C depends on B and D; whereas A and B are each independent.

The next figure depicts a graphical model with a cycle. This may be interpreted in terms of each variable 'depending' on the values of its parents in some manner. The particular graph shown suggests a joint probability density that factors as

but other interpretations are possible. [2]

The framework of the models, which provides algorithms for discovering and analyzing structure in complex distributions to describe them succinctly and extract the unstructured information, allows them to be constructed and utilized effectively.[1] Applications of graphical models include causal inference, information extraction, speech recognition, computer vision, decoding of low-density parity-check codes, modeling of gene regulatory networks, gene finding and diagnosis of diseases, and graphical models for protein structure.