The High Desert at sunset in Johnson Valley, along California State Route 247

High Desert is a vernacular region with non-discrete boundaries applying to areas of the western Mojave Desert in southern California. The "High Desert" region is an area that generally is situated between 2,000 feet (610 m) and 4,000 feet (1,200 m) in elevation, and located just north of the San Gabriel, San Bernardino, and Little San Bernardino Mountains.

The term "High Desert" is commonly used by local news media,[1] especially in weather forecasts, because of the high desert's unique and moderate weather patterns compared to its low desert neighbors. It generally gets much hotter in the summer and much colder in the winter than the lower elevation areas closer to the coast and in the lower valleys.[2][3] The term "High Desert" serves to differentiate it from southern California's Low Desert, which is defined by the differences in elevation, climate, animal life, and vegetation native to these regions. Comparison example: Palm Springs is considered "Low Desert", at 500 feet (150 m) above sea level. In contrast, Landers is considered "High Desert", at 3,100 feet (940 m) above sea level.

The High Desert, along with the "Mojave River Valley" and the Victor Valley, is mostly used to describe the area centered around Victorville. The region extends as far west as Lancaster, as far northwest as Palmdale, and north to the Barstow desert.[3] High Desert has also been incorporated into the names of businesses and organizations in these areas.[4][5] The term "High Desert" is also used to refer to the communities north and west of Joshua Tree National Park - Twentynine Palms the Morongo Basin (Yucca Valley). These are also at a higher elevation than the Low Desert that surrounds the Coachella Valley and Imperial Valley.

Depending on how the boundaries of the Mojave and the Colorado Desert region are defined, the High Desert either includes the entire California portion of the Mojave Desert (using a smaller geographic designation than its ecoregion) or the northern portion of the California desert (using a larger geographic designation including the ecotope area of the lower and adjacent Sonoran Desert).

The name of the region comes from its higher elevations and more northern latitude with associated climate and plant communities distinct from the Low Desert, which includes the Colorado Desert and the below sea level Salton Sea. The High Desert is typically windier than the Low Desert, and averages between 12 degrees to 20 degrees Fahrenheit cooler in both the winter and summer seasons.

The High Desert is often divided into the following regions, moving west to east:

San Bernardino County's portion of the High Desert region contains the most land mass of the four involved counties, making up approximately 70% of the total county's area. 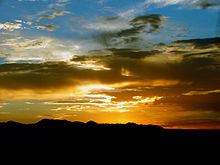 Other parts of the greater physical region known as the "High Desert" include:

Sunset over the Mojave

The major metropolitan centers in the region are primarily centered on the cities of Lancaster and Victorville. Lancaster, the largest city in the High Desert, is located in the Antelope Valley next to Palmdale and anchors the area's largest and most populous region with a metro area of just over 500,000. The Victor Valley area, which includes cities and communities such as Victorville, Hesperia, Adelanto, Apple Valley, and Lucerne Valley, boasts a population around 335,000.[8] The Barstow area, to the north of Victor Valley, and the Morongo Basin near Joshua Tree National Park both have populations of around 60,000.

Incorporated places are listed in bold. This list includes all places in the broadest definition of "High Desert." Population figures are most recent information available from the US Census Bureau.

Films using High Desert as a subject of the narrative