Berry and plant
For other uses, see Huckleberry (disambiguation). 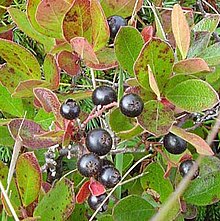 Huckleberry is a name used in North America for several plants in the family Ericaceae, in two closely related genera: Vaccinium and Gaylussacia. The huckleberry is the state fruit of Idaho.

The name 'huckleberry' is a North American variation of the English dialectal name variously called 'hurtleberry' or 'whortleberry' (/ˈhwɜːrtəlbɛri/) for the bilberry.[1] In North America the name was applied to numerous plant variations all bearing small berries with colors that may be red, blue or black.[2] It is the common name for various Gaylussacia species, and some Vaccinium species, such as Vaccinium parvifolium, the red huckleberry, and is also applied to other Vaccinium species which may also be called blueberries depending upon local custom, as in New England and parts of Appalachia.[2]

Four species of huckleberries in the genus Gaylussacia are common in eastern North America, especially G. baccata, also known as the black huckleberry.[2]

From coastal Central California through Oregon to southern Washington and British Columbia, the red huckleberry (V. parvifolium) is found in the maritime-influenced plant community. In the Pacific Northwest and mountains of Montana and Idaho, this huckleberry species and several others, such as the black Vaccinium huckleberry (V. membranaceum) and blue (Cascade) huckleberry (V. deliciosum), grow in various habitats, such as mid-alpine regions up to 3,500 metres (11,500 ft) above sea level, mountain slopes, forests, or lake basins.[2] The plant grows best in damp, acidic soil having volcanic origin, attaining under optimal conditions heights of 1.5 to 2 m (4 ft 11 in to 6 ft 7 in), usually ripening in mid-to-late summer or later at high elevations.[2] Huckleberry was one of the few plant species to survive on the slopes of Mount St. Helens when the volcano erupted in 1980, and existed as a prominent mountain-slope bush in 2017.[3]

Where the climate is favorable, certain species of huckleberry, such as V. membranaceum, V. parvifolium and V. deliciosum, are used in ornamental plantings.[2] The 'garden huckleberry' (Solanum scabrum) is not a true huckleberry, but is instead a member of the nightshade family.

Huckleberries grow wild on subalpine slopes, forests, bogs and lake basins of the northwestern United States and western Canada.[4] The plant has shallow, radiating roots topped by a bush growing from an underground stem. Attempts to cultivate huckleberry plants from seeds have failed, with plants devoid of fruits. This may be due to inability for the plants to fully root and to replicate the native soil chemistry of wild plants.[4][5]

Use as food or traditional medicine

Huckleberries were traditionally collected by Native American and First Nations people along the Pacific coast, interior British Columbia, Idaho, and Montana for use as food or traditional medicine.[2][6][7] The berries are small and round, 5–10 mm (1⁄4–3⁄8 in) in diameter, and look like large dark blueberries. In taste, they may be tart, with a flavor similar to that of a blueberry, especially in blue- and purple-colored varieties, and some have noticeably larger, bitter seeds. The fruit is versatile in various foods or beverages, including jam, pudding, candy, pie, ice cream, muffins, pancakes, salad dressings, juice, tea, soup, and syrup.[2][7]

Two huckleberry species, V. membranaceum and V. ovatum, were studied for phytochemical content, showing that V. ovatum had greater total anthocyanin and polyphenols than did V. membranaceum.[8] Each species contained 15 anthocyanins (galactoside, glucoside, and arabinoside of delphinidin, cyanidin, petunidin, peonidin, and malvidin) but in different proportions.[8] 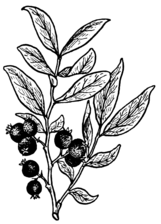 Huckleberry "Huck" Finn is a fictional character in the books The Adventures of Tom Sawyer (1876) and Adventures of Huckleberry Finn (1884), by American author and humorist, Mark Twain (Samuel Langhorne Clemens). Huckleberry Finn was portrayed to be about 12 or 13 years old, derived from Twain's boyhood friend, Tom Blankenship, as "ignorant, unwashed, insufficiently fed; but he had as good a heart as ever any boy had. His liberties were totally unrestricted. He was the only really independent person—boy or man—in the community, and by consequence he was tranquilly and continuously happy and envied by the rest of us." The cartoon character that shares the same name with Mark Twain's character is Huckleberry "Huck" Hound, an anthropomorphic coonhound created by Hanna-Barbera in 1958, in which he has the similar fur color to the blue huckleberries and the term "huckleberry" can be a slang expression for a rube or an amateur, or a mild expression of disapproval.

Huckleberries hold a place in archaic American English slang. The phrase "a huckleberry over my persimmon" was used to mean "a bit beyond my abilities." "I'm your huckleberry" is a way of saying that one is just the right person for a given job.[9] The range of slang meanings of huckleberry in the 19th century was broad, also referring to significant persons or nice persons.[10][11]