Illumina, Inc. is an American company. Incorporated on April 1, 1998, Illumina develops, manufactures, and markets integrated systems for the analysis of genetic variation and biological function. The company provides a line of products and services that serves the sequencing, genotyping and gene expression, and proteomics markets. Its headquarters are located in San Diego, California.

Illumina's technology had purportedly by 2014 reduced the cost of sequencing a human genome to US$1,000 from a price of $1 million in 2007.[2] Customers include genomic research centers, pharmaceutical companies, academic institutions, clinical research organizations, and biotechnology companies.[1] 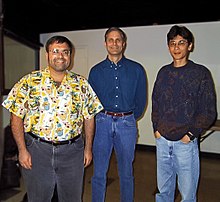 Czarnik, Stuelpnagel, and Chee at their Illumina office in the summer of 1998

Illumina was founded in April 1998 by David Walt, Larry Bock, John Stuelpnagel, Anthony Czarnik, and Mark Chee. While working with CW Group, a venture-capital firm, Bock and Stuelpnagel uncovered what would become Illumina's BeadArray technology[3] at Tufts University and negotiated an exclusive license to that technology. In 1999, Illumina acquired Spyder Instruments (founded by Michal Lebl, Richard Houghten, and Jutta Eichler) for their technology of high-throughput synthesis. Illumina completed its initial public offering in July 2000.[4]

On January 26, 2007, the company completed the acquisition of the British company Solexa, Inc. for ~$650M.[5] Solexa was founded in June 1998 by Shankar Balasubramanian and David Klenerman to develop and commercialize genome-sequencing technology invented by the founders at the University of Cambridge. Solexa INC was formed in 2005 when Solexa Ltd reversed into Lynx Therapeutics of Hayward.[6] Illumina also uses the DNA colony sequencing technology, invented in 1997 by Pascal Mayer and Laurent Farinelli [7] and which was acquired by Solexa in 2004 from the company Manteia Predictive Medicine. It is being used to perform a range of analyses, including whole genome resequencing, gene-expression analysis, and small ribonucleic acid (sRNA) analysis.

Until 2010, Illumina sold only instruments that were labeled "for research use only"; in early 2010, Illumina obtained FDA approval for its BeadXpress system to be used in clinical tests.[13][14] This was part of the company's strategy at the time to open its own CLIA lab and begin offering clinical genetic testing itself.[15]

In 2014, the company announced a multimillion-dollar product, HiSeq X Ten, that it forecast would provide large-scale whole-genome sequencing for $1,000/genome.[22][23] The company claimed that 40 such machines would be able to sequence more genomes in one year than had been produced by all other sequencers to date.[24] In January 2014, Illumina already held 70% of the market for genome-sequencing machines.[25] Illumina machines accounted for more than 90% of all DNA data produced.[26] In fact, the amount of data produced by Illumina machines is such that the company invested in the acquisition of the pre-commercial firm Enancio in 2020, which had developed a DNA data compression algorithm specifically targeting Illumina data capable of reducing storage footprint by 80% (e.g. 50 Gb compressed to 10 Gb).[27]

In late 2015, Illumina spun off the company GRAIL, focused on blood testing for cancer tumors in the bloodstream. In 2017 the company had planned to raise $1 billion in its second round of financing, and received funding from Bill Gates and Jeff Bezos investing $100 million in series A funding, and with Illumina maintaining a 20% holding share in Grail.[30] The company is working with a blood test trial with over 120,000 women during scheduled mammogram visits in the states of Minnesota and Wisconsin, as well as a partnership with the Mayo Clinic. The company Grail uses Illumina sequencing technology for tests.[31] The company plans to roll out the tests by 2019, with a cost of $500 per individual.[32] In September 2020, Illumina announced a proposed cash and stock deal to acquire Grail for $8 billion.[33][34]

In November 2018, the company proposed the acquisition of Pacific Biosciences for $8.00 per share or around $1.2 billion in total.[35][36] In December 2019, the Federal Trade Commission sued to block the acquisition.[37] The proposed deal was abandoned on January 2, 2020, with Illumina paying Pacific a $98 million termination fee.[38]

In March 2021, the FTC sued to block Illumina's $7.1 billion vertical merger with GRAIL.[39][40] In July 2021, the European Commission opened an in-depth investigation into the GRAIL acquisition by Illumina.[41] Against the orders of active investigations by both the US Federal Trade Commission and the EU European Commission, Illumina publicly announced it had completed its acquisition of GRAIL on August 18, 2021.[42] The FTC urged Illumina to "unwind" the merger shortly after,[43] and in October 2021, the European Commission ordered Illumina to keep GRAIL a separate company[44] and adopted interim measures to prevent harm to competition, or face penalty payments up to 5% of their average daily turnover and/or fines up to 10% of their annual worldwide turnover under Articles 15 and 14 of the EU Merger Regulation respectively.[45]

The following is an illustration of the company's mergers, acquisitions, spin-offs and historical predecessors: 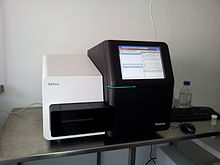 Illumina sells a number of high-throughput DNA sequencing systems, also known as DNA sequencers, based on technology developed by Solexa. The technology features bridge amplification to generate clusters and reversible terminators for sequence determination.[46][47] The technology behind these sequencing systems involves ligation of fragmented DNA to a chip, followed by primer addition and sequential fluorescent dNTP incorporation and detection.

Three of the most popular Illumina sequencers are the MiSeq, HiSeq, and NovaSeq. From a single run, the MiSeq generates 30 million reads, the HiSeq generates 3 billion reads, and the NovaSeq generates 13 billion reads. Comparatively, the NovaSeq has the ability to generate 4 trillion bases in a day whereas Sanger sequencing can only generate one million bases per day. New machines have the capacity to sequence the entire human genome in 48 hours at the price of $1,000. Illumina sequencers are highly accurate, and only have an error once every thousand bases.[48]

Illumina sequencing happens within the flow cells. These flow cells are small in size and are housed in the flow cell compartment. In MiSeq sequencers, the flow cell can generate between 1 million and 30 million reads per run. The HiSeq flow cell is larger than that of the MiSeq and has the ability to generate 3 billion reads per run. Lastly, the NovaSeq flow cell is the largest of the three and can generate 13 billion reads per run. Flow cell clustering happens when a denatured DNA sample is placed in a flow cell. Primers already in the flow cell channel capture and bind to the ends of the short denatured DNA sample. Then, DNA polymerase is added and the DNA building blocks are introduced. This results in a newly synthesized strand constrained to the bottom of the flow cell. Next, the original template strand is washed out binding the newly synthesized strand to the other DNA sequence present on the surface. DNA polymerase and building blocks are introduced again forming a new strand. These steps are repeated until about 1,000 copies are made in a cluster.[48]

In 2010, Cornell University and Life Technologies filed a lawsuit against Illumina, alleging that its microarray products infringed on eight patents held by the university and exclusively licensed to the start-up. The case was settled in April 2017 without any finding of fault. In September 2017 both parties asked to have the settlement reviewed, with Cornell accusing both Illumina and Life Technologies of misrepresentation and fraud.[49] Cornell claimed that ThermoFisher had promised to settle the suit with Illumina and ask for the Markman wording to be dropped, so that they could file a subsequent suit involving other patents invented in the laboratory of Dr. Francis Barany at Cornell. Instead of filing the suit, ThermoFisher and Illumina settled another lawsuit in California and secretly sublicensed those very same patents. In 2018, Dr. Monib Zirvi filed a lawsuit in the Southern District of New York against Illumina and some of its key employees claiming that they knowingly incorporated ideas and ZipCode DNA sequences invented in the Barany Lab in Illumina’s patent applications. Although this suit was dismissed, it was only after Illumina and its attorneys claimed that some of those IP misappropriation were “storm warnings” and thus statutes of limitations had run out on those particular claims. Dr. Monib Zirvi also filed a FOIA case in New Jersey in 2020 for unredacted copies for key NIH grants that Illumina filed early in its existence. William Noon, an in-house attorney at Illumina, had filed a FOIA request for 4 of these key grants as well in January 2015.

In February 2016, Illumina filed a lawsuit against Oxford Nanopore Technologies, which was the first company to commercialize nanopore sequencing. Illumina claimed that Oxford Nanopore infringed its patents on the use of a biological nanopore, Mycobacterium smegmatis porinA (MspA), for sequencing systems.[50][51] In August 2016 both parties eventually settled their patent lawsuit, with Oxford Nanopore Technologies moving to instead use the CsgG nanopore derived from Escherichia coli, which it licensed from VIB in Belgium.[52]

In February 2020, Illumina filed a patent infringement suit against BGI relating to its "CoolMPS" sequencing products.[53] In return BGI has filed patent infringement lawsuits for violation of federal antitrust and California unfair competition laws, claiming use of "fraudulent behavior" to obtain or enforce sequencing patents that it has asserted against BGI, preventing the firm from entering the US market.[54] However, in May 2022, Illumina was ordered to pay $333 million to a U.S. unit of BGI in California for infringing two patents of DNA-sequencing systems. The jury of the case also said that Illumina willfully infringed the patents, and that their former accusation of BGI's infringement was invalid.[55]

Following a jury verdict in patent infringement suit, Illumina was ordered to pay $333.8 million in damages to Complete Genomics, a subsidiary of the MGI Tech.[56]