Term used in botany to describe a cluster of flowers
Not to be confused with Fluorescence.
"Inflorescent" redirects here. For the Friendly Fires album, see Inflorescent (album). 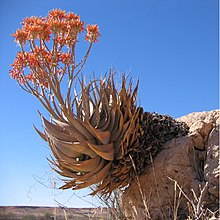 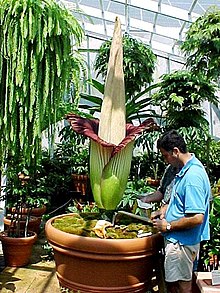 Amorphophallus titanum has the world's largest unbranched inflorescence. Photo of the plant in bloom in 2000 at Fairchild Tropical Botanic Garden in Miami, FL.

An inflorescence is a group or cluster of flowers arranged on a stem that is composed of a main branch or a complicated arrangement of branches.[1] Morphologically, it is the modified part of the shoot of seed plants where flowers are formed on the axis of a plant. The modifications can involve the length and the nature of the internodes and the phyllotaxis, as well as variations in the proportions, compressions, swellings, adnations, connations and reduction of main and secondary axes. One can also define an inflorescence as the reproductive portion of a plant that bears a cluster of flowers in a specific pattern.

Inflorescences are described by many different characteristics including how the flowers are arranged on the peduncle, the blooming order of the flowers and how different clusters of flowers are grouped within it. These terms are general representations as plants in nature can have a combination of types. These structural types are largely based on natural selection.[2]

Inflorescences usually have modified foliage different from the vegetative part of the plant. Considering the broadest meaning of the term, any leaf associated with an inflorescence is called a bract. A bract is usually located at the node where the main stem of the inflorescence forms, joined to the rachis of the plant, but other bracts can exist within the inflorescence itself. They serve a variety of functions which include attracting pollinators and protecting young flowers. According to the presence or absence of bracts and their characteristics we may distinguish the following:

Plant organs can grow according to two different schemes, namely monopodial or racemose and sympodial or cymose. In inflorescences these two different growth patterns are called indeterminate and determinate respectively, and indicate whether a terminal flower is formed and where flowering starts within the inflorescence.

In determinate inflorescences the terminal flower is usually the first to mature (precursive development), while the others tend to mature starting from the base of the stem. This pattern is called acropetal maturation. When flowers start to mature from the top of the stem, maturation is basipetal, whereas when the central mature first, maturation is divergent.

As with leaves, flowers can be arranged on the stem according to many different patterns. See 'Phyllotaxis' for in-depth descriptions

Similarly arrangement of leaf in bud is called Ptyxis.

When a single or a cluster of flower(s) is located at the axil of a bract, the location of the bract in relation to the stem holding the flower(s) is indicated by the use of different terms and may be a useful diagnostic indicator.

Typical placement of bracts include:

Metatopic placement of bracts include:

There is no general consensus in defining the different inflorescences. The following is based on Focko Weberling's Morphologie der Blüten und der Blütenstände (Stuttgart, 1981). The main groups of inflorescences are distinguished by branching. Within these groups, the most important characteristics are the intersection of the axes and different variations of the model. They may contain many flowers (pluriflor) or a few (pauciflor). Inflorescences can be simple or compound.

Determinate simple inflorescences are generally called cymose. The main kind of cymose inflorescence is the cyme (pronounced 'saim', from the Latin cyma in the sense 'cabbage sprout', from Greek kuma 'anything swollen').[6][7] Cymes are further divided according to this scheme:

A cyme can also be so compressed that it looks like an umbel. Strictly speaking this kind of inflorescence could be called umbelliform cyme, although it is normally called simply 'umbel'.

Another kind of definite simple inflorescence is the raceme-like cyme or botryoid; that is as a raceme with a terminal flower and is usually improperly called 'raceme'.

A reduced raceme or cyme that grows in the axil of a bract is called a fascicle. A verticillaster is a fascicle with the structure of a dichasium; it is common among the Lamiaceae. Many verticillasters with reduced bracts can form a spicate (spike-like) inflorescence that is commonly called a spike.

A kind of compound inflorescence is the double inflorescence, in which the basic structure is repeated in the place of single florets. For example, a double raceme is a raceme in which the single flowers are replaced by other simple racemes; the same structure can be repeated to form triple or more complex structures.

Compound raceme inflorescences can either end with a final raceme (homoeothetic), or not (heterothetic). A compound raceme is often called a panicle. Note that this definition is very different from that given by Weberling.

Compound umbels are umbels in which the single flowers are replaced by many smaller umbels called umbellets. The stem attaching the side umbellets to the main stem is called a ray.

The most common kind of definite compound inflorescence is the panicle (of Webeling, or 'panicle-like cyme'). A panicle is a definite inflorescence that is increasingly more strongly and irregularly branched from the top to the bottom and where each branching has a terminal flower.

The so-called cymose corymb is similar to a racemose corymb but has a panicle-like structure. Another type of panicle is the anthela. An anthela is a cymose corymb with the lateral flowers higher than the central ones.

Other combinations are possible. For example, heads or umbels may be arranged in a corymb or a panicle.

The family Asteraceae is characterised by a highly specialised head technically called a calathid (but usually referred to as 'capitulum' or 'head'). The family Poaceae has a peculiar inflorescence of small spikes (spikelets) organised in panicles or spikes that are usually simply and improperly referred to as spike and panicle. The genus Ficus (Moraceae) has an inflorescence called syconium and the genus Euphorbia has cyathia (sing. cyathium), usually organised in umbels.

Some species have inflorescences reduced to composite flowers or pseudanthia, in which case it is difficult to differentiate between inflorescences and single flowers.[8]

Genes that shape inflorescence development have been studied at great length in Arabidopsis. LEAFY (LFY) is a gene that promotes floral meristem identity, regulating inflorescence development in Arabidopsis.[9] Any alterations in timing of LFY expression can cause formation of different inflorescences in the plant.[10] Genes similar in function to LFY include APETALA1 (AP1). Mutations in LFY, AP1, and similar promoting genes can cause conversion of flowers into shoots.[9] In contrast to LEAFY, genes like terminal flower (TFL) support the activity of an inhibitor that prevents flowers from growing on the inflorescence apex (flower primordium initiation), maintaining inflorescence meristem identity.[11] Both types of genes help shape flower development in accordance with the ABC model of flower development. Studies have been recently conducted or are ongoing for homologs of these genes in other flower species.