Lexington is a suburban town in Middlesex County, Massachusetts, United States. It is 10 miles (16 km) from Downtown Boston. The population was 34,454 as of the 2020 census.[1] The area was originally inhabited by Native Americans, and was first settled by Europeans in 1641 as a farming community. Lexington is well known as the site of the first shots of the American Revolutionary War, in the Battle of Lexington on April 19, 1775, where the "Shot heard 'round the world" took place. It is home to Minute Man National Historical Park. 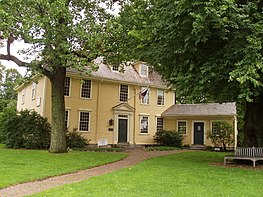 Native Americans inhabited the area that would become Lexington for thousands of years prior to European colonization of the Americas, as attested by a woodland era archaeological site near Loring Hill south of the town center.[2] At the time of European contact, the area may have been a border region between Naumkeag or Pawtucket to the northeast, Massachusett to the south, and Nipmuc to the west, though the land was eventually purchased from the Naumkeag.[2][3][4][5] The contact period introduced a number of European infectious diseases which would decimate native populations in virgin soil epidemics, leaving the area largely uncontested upon the arrival of large groups of English settlers in the Puritan Great Migration. In 1639, the Massachusetts General Court purchased the land that would become present day Lexington, then within the boundaries of Cambridge, from the Naumkeag Squaw Sachem of Mistick.[5]

The area that is now Lexington was first settled circa 1642[6] as part of Cambridge, Massachusetts.[6] As the population increased, Lexington was incorporated as a separate parish, called Cambridge Farms, in 1691. This allowed the residents to have their own local church and minister, although they were still under jurisdiction of the Town of Cambridge. Lexington was incorporated as a separate town in 1713. It was then that it got the name Lexington.[7] How the town received its name is the subject of some controversy. One view is that it was named in honor of Lord Lexington, an English peer.[8][better source needed] Another view is that it was named after Lexington (which was pronounced and is today spelled Laxton) in Nottinghamshire, England.[9]

In the early colonial days, Vine Brook, which runs through Lexington, Burlington, and Bedford, and then empties into the Shawsheen River, was a focal point of the farming and industry of the town. It provided for many types of mills, and in the 20th Century, for farm irrigation.

On April 19, 1775, what many regard as the first battle of the American Revolutionary War was the Battle at Lexington. On the night of April 18, the British Army had sent out 800 grenadiers and light infantry soldiers on foot from Boston, with the intention of destroying Colonial gunpowder and cannons that were being stored in Concord, as well as capturing two leaders of the Sons of Liberty, John Hancock and Samuel Adams, who were staying in Lexington.[10] Hancock and Adams were warned of the danger by two alarm riders, Paul Revere and William Dawes, who alerted the countryside of the British movements. When the British soldiers arrived on the Lexington Common not long after sunrise, they faced 77 men of the Lexington militia, commanded by Captain John Parker. Someone—still unknown to this day—fired a shot, provoking an exchange of musket fire between the two sides.[10] Eight Lexington militia men were killed, dozens more wounded. After the rout, the British marched on toward Concord. There, several hundred militia and minute men from nearby towns assembled near the Old North Bridge to turn back the British and prevent them from capturing and destroying the Colony's stores of gunpowder and military equipment.[11]

Today, the town annually commemorates the battle on the Battle Green in the Downtown with a reenactment, as part of its Patriots Day festivities.[12] 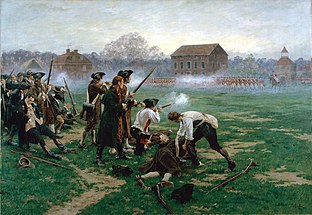 Painting of the Battle of Lexington

For decades after the Revolutionary War, Lexington grew modestly while remaining largely a farming community, providing Boston with much of its produce. Many of these farms became dense housing developments and subdivisions by the 1970s. One notable housing development was the Peacock Farm residential neighborhood. It was designed by architect Walter Pierce and was built between 1952 and 1958. As of 2012, the neighborhood was on the National Register of Historic Places. Lexington always had a bustling downtown area, which remains to this day. Lexington began to prosper, helped by its proximity to Boston, and having a rail line (originally the Lexington and West Cambridge Railroad, later the Boston and Maine Railroad) service its citizens and businesses, beginning in 1846 until 1981. In 1984, Due to the rapid urbanization that occurred in many other suburbs like Lexington, The MBTA proposed expanding the Red Line through Lexington, terminating in Bedford. Despite Lexington and Bedford being on board with the idea, Arlington residents lobbied against the plan and it was shot down by the Board of Selectmen.[13]

Lexington, as well as many of the towns along the Route 128 corridor, experienced a jump in population in the 1960s and 1970s, due to the high-tech boom. Today, many companies are still moving into Lexington, with Takeda and BAE Systems both having huge offices. The urbanization and massive job growth resulted in soaring property values, and the school system becoming nationally recognized for its excellence.[14] The town participates in the METCO program, which buses minority students from Boston to suburban towns to receive better educational opportunities than those available to them in the Boston Public Schools.[15]

Lexington was the Cold War location of the USAF "Experimental SAGE Subsector"[16] for testing a prototype IBM computer that arrived in July 1955[17] for development of a computerized "national air defense network"[18] (the namesake "Lexington Discrimination System" for incoming ICBM warheads was developed in the late 1960s).[19]

Lexington borders Burlington, Woburn, Winchester, Arlington, Belmont, Waltham, Lincoln, and Bedford. It has more area than all other municipalities that it borders.

See also: List of Massachusetts locations by per capita income

As of 2020, Lexington has the highest Asian population in Massachusetts, reflecting 36% of the population. 29% of Lexington residents were born outside of the United States.[36] This racial diversity is largely reflected in the Lexington Public Schools, where Asians compose over 40% of the student population.[37]

The town uses a five-member Select Board. The day-to-day operations are handled by a Town Manager hired by the Select Board. A Representative town meeting, acts as the legislative body, made up of 203 members, including 21 citizens elected from each of nine precincts for three-year staggered terms, At-large member positions include the Select Board, Town Counsel, Town Clerk and the School Committee chairman.[38] Article LXXXIX Section 8 of the Massachusetts Constitution permits towns with a population greater than 12,000 to adopt a city form of government. The Town of Lexington meets the population requirement to become a city, but has not done so, in part because it would lose its ability to engage citizens in local government under the Representative Town Meeting form of government.

Lexington is Represented by State Representative Michelle Ciccolo, State Senators Cindy Friedman and Michael Barrett, all Democrats. Lexington is in Massachusetts's 5th congressional district, currently represented by Katherine Clark. Federally, Lexington is heavily Democratic, having not voted Republican since 1980. Even in Scott Brown's upset 2010 Senate special election, he received just 34% of the vote, to Coakley's 64%.

The Lexington Police Department (LPD) is responsible for law enforcement in the town of Lexington, handling investigations, patrol, and traffic safety/control, with 51 sworn officers. They also host a youth academy for children aged 12–17 as well as a Police Explorers Program (For high school students interested in the comprehensive learning of Law Enforcement). It is led by Chief of Police Michael McLean.

The Lexington Fire Department (LFD) provides both fire and rescue, and emergency medical services to the town of Lexington. The date of its formation is unknown. It is based in the Fire Department Headquarters, with a secondary East Lexington Station, having 61 firefighters and EMS personnel. It is led by Fire Chief Derek Sencabaugh.

The Lexington Chinese School (LCS; 勒星頓中文學校) holds its classes at Belmont High School in Belmont.[45] In 2003 over 400 students attended classes at LCS, held on Sundays.[46] 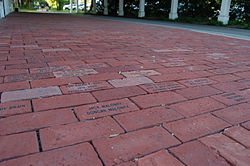 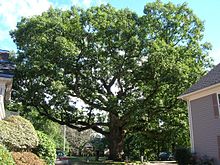 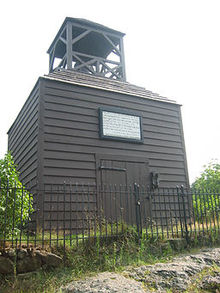 Lexington is home to the Lexington Symphony, which performs regularly at Cary Hall.[47][48]

MBTA bus operates three routes that connect with the Red Line at Alewife station in Cambridge.

Lexington is a sister city of: