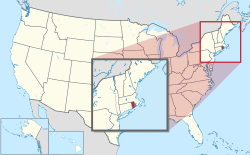 Map of the United States with Rhode Island highlighted

Municipalities by population, according to 2020 census data

Rhode Island is a state located in the Northeastern United States. According to the 2020 United States Census, Rhode Island is the 8th least populous state with 1,097,379[1] inhabitants and the smallest by land area spanning 1,033.81 square miles (2,677.6 km2) of land.[2] It is divided into 39 incorporated municipalities, including 8 cities and 31 towns, grouped into 5 historical counties that have no municipal functions as the state has no county level of government.[3][4] The entire area of the state is governed by town administrations except for areas within the boundaries of cities.[4] While some communities within towns and cities are census-designated places, there are no unincorporated areas in the state.

Municipalities in Rhode Island can incorporate as a town or city by a special act of the state legislature and there is no minimum population requirement.[4] Eight municipalities were re-incorporated as cities operating under a charter, while the other 31 remain as towns which perform similar services.[4] Since Rhode Island has no county level of government, cities and towns provide services commonly performed by county governments in other states.[4] The state's cities and towns may adopt one of four forms of government: council–manager, mayor–council, town council–town meeting, or administrator–council.[5] The primary difference between these forms of government is how the chief executive is selected.[5] The Council–manager system involves an elected council who exercise overall control of the local government and a chief executive termed city or town manager who is generally appointed by and responsible to the council for the administration of local policies.[6] Council–manager systems may elect a mayor but they have no formal administrative functions with the potential exception of a degree of veto power.[6] Mayor–council systems have a similarly elected council however the mayor is elected and yields administrative power. In the town council–town meeting system, there is no full-time chief executive.[5]