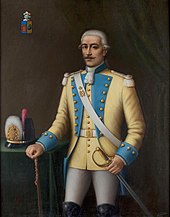 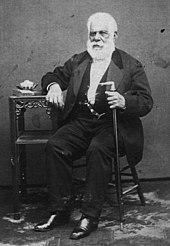 Below is a list of the governors of early California (1769–1850), before its admission as the 31st U.S. state. First explored by Gaspar de Portolá, with colonies established at San Diego and Monterey, California was a remote, sparsely-settled Spanish province of New Spain. In 1822, following Mexican independence, California became part of Mexico.

In 1836, a coup led by Californios Juan Bautista Alvarado and José Castro eventually resulted in Alvarado becoming governor.[1] That conflict ended in 1838, when the central government of Mexico recognized Alvarado as California Governor. The territorial diputación (legislature) approved the appointment.

Another disputed governorship occurred in 1844, settled when another Californio, Pio Pico, became the last Governor of Mexican California. In 1846, the "Bear Flag Revolt" in Sonoma declared California an independent republic—the "Bear Flag Republic". No government was formed, however, and the revolt did not have time to spread very far because, than a month later, California came under U.S. military protection at the outset of the Mexican–American War. California was ceded to the U.S. in 1848, and was admitted as the 31st U.S. state on September 9, 1850. Peter Burnett, the last governor of the post-war military territory, became its first state governor after admission.

From 1769 to 1804, the Californias were governed as one administrative unit within the Spanish Empire. Following 1804, Alta California and Baja California each had their own administration.

Following the Mexican War of Independence from the Spanish, both of the Californias became part of the newly-independent Mexico in 1822. Mexican rule was interrupted from 1836 to 1838 by the Californio independence movement led by Juan Bautista Alvarado, who was acclaimed President of Alta California. However, Alvarado entered into negotiations with the Mexican government in 1838, which resulted in the disbandment of the Californio independence movement in favor of greater autonomy and the appointment of Alvarado as governor, thus reestablishing Mexican rule in Alta California, which lasted until 1846.

While Juan Bautista Alvarado maintained effective control as President of Alta California from 1836 to 1837, the Mexican central government appointed noted Californio statesman Carlos Antonio Carrillo as Governor of California[2] to lead the nationalist offensive against Alvarado. As Carrillo was unsuccessful, Alvarado and the Mexican central government negotiated an end to the civil war in Alta California, resulting in Alvarado's abandonment of independence in favor of greater autonomy and the governorship, thus reestablishing the continuity of Mexican governance over Alta California.

Following the American Conquest of California, forces part of the Pacific Squadron and California Battalion established U.S. military rule in California, beginning in 1846. Military governors ruled California until 1849, when efforts led by Bennet C. Riley led to the creation of the Constitution of California at the Constitutional Convention of Monterey and the establishment of civilian rule with the election of Peter Hardeman Burnett as the first Governor of California. Soon after, California was admitted as a state.