In the late 1800s, Loma Linda began as a development of tourist halls called Mound City, as encouraged by railroad companies. Shops and cottages were built, but the project would later fail. During the late 1890s, a group of businessmen and physicians from Los Angeles bought the Mound City Hotel and reopened it as a convalescent home and health resort. They called it Loma Linda, meaning 'beautiful hill' in Spanish.[8]

In 1905 Seventh-day Adventists John Burden and Ellen G. White purchased the Loma Linda Hotel and property and reopened it as the Loma Linda Sanitarium.[9] In February 1906, The Loma Linda College of Evangelists was established.[10]

In 1969, San Timoteo Creek overflowed its banks, inundating two-thirds of Loma Linda. Many of the bridges over the creek washed away, and Loma Linda Academy was completely flooded.[11][12][13] In 2010, the creek again flooded parts of Loma Linda.[13]

Loma Linda is located in southwestern San Bernardino County and is considered part of the Inland Empire. It is bordered on the north by the city of San Bernardino, on the east by Redlands, on the west by Colton, and on the south by Riverside County. An area of unincorporated territory in Riverside County separates Loma Linda from the city of Moreno Valley to the south. The remnants of Bryn Mawr, an unincorporated community formerly located between Loma Linda and Redlands, were annexed by the city in 2008.

Loma Linda is in the southern San Bernardino Valley. The southern third of the city is known as the South Hills; this rugged and hilly area at the northwestern end of the Badlands is a city-owned open space reserve protected by a local initiative.[15] San Timoteo Creek flows from southeast to northwest through the city.

Ground water near Loma Linda is contaminated by a plume of the chemical perchlorate which was used in the manufacturing of solid rocket fuel. This chemical was also formerly (decades ago and in very small amounts) prescribed by physicians to control the overactive thyroid glands of certain patients. Attempts to quantify the effects of low-level exposure to perchlorate have met with resistance from environmental (and other) activists. A nearby plant operated by Lockheed Aerospace has been implicated in the improper disposal of the rocket fuel ingredient, which leached into the ground water northeast of Loma Linda. Loma Linda's municipal water supply, nevertheless, has been unaffected by the plume, primarily because Lockheed Martin installed a $19 million treatment plant in 2010 to remove both perchlorate and trichloroethylene from water after pumping it from the aquifer.[16] 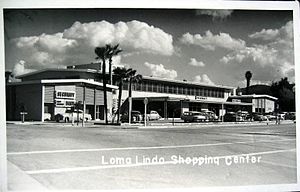 A shopping center at Loma Linda University pictured in the early 1950s. 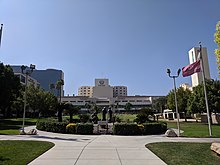 Nichol Hall on the campus of Loma Linda University.

Residents in Loma Linda have one of the highest rates of longevity in the United States.[21][22] Writer Dan Buettner has labeled Loma Linda a Blue Zone, an area where the longevity is appreciably higher than the national average and a substantial proportion of the population lives past 100 years. Buettner's 2008 book, The Blue Zones: Lessons for Living Longer From the People Who've Lived the Longest, attributes Loma Linda's longevity rate to Adventist cultural health and diet practices.[23] The city strictly controls the sale of alcohol and has banned public smoking. The church-owned grocery store does not sell meat.[21][24][25][26]

In the United States House of Representatives, Loma Linda is in California's 31st congressional district, represented by Democrat Pete Aguilar.[29]

The city of Loma Linda forms part of the Redlands Unified School District, with Bryn Mawr Elementary School being situated within Loma Linda city limits. However, the western edge of the city is served by the Colton Unified School District. Also located in the city are Loma Linda Academy, a K-12 school, and Loma Linda University (LLU), a health-sciences higher-learning institution, both run by the Seventh-day Adventist Church.[30] Notable firsts at Loma Linda University's medical center include the first baboon-to-human heart transplant and the first split-brain surgery.[31] 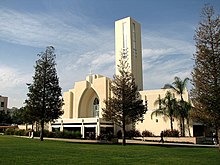 Loma Linda is twinned with Manipal, India, and Libertador San Martin, Argentina, as its sister cities.[32]

Loma Linda University Medical Center is featured in Venom ER, an Animal Planet program focusing on snakebite treatment at the hospital.[33] Former Loma Linda resident and heart surgeon Ellsworth Wareham was featured in the 2009 documentary film How to Live Forever.[34]

The city is a Blue Zone, where residents live longer than average, and this is attributed to the healthy lifestyle of the many Adventist residents in Loma Linda.[38]