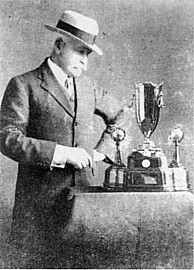 Sir Macpherson Robertson[1] KBE (6 September 1859 – 20 August 1945) was an Australian philanthropist, entrepreneur and founder of chocolate and confectionery company MacRobertson's. He was also known for bringing the United States inventions of chewing gum and cotton candy (known in Australia as fairy floss) to Australia.

Macpherson Robertson was born in Ballarat, Victoria. He was the eldest of seven children of Macpherson David Robertson, a Scottish carpenter born in Uruguay, and his Irish wife, Margaret (née Browne). The family came to Ballarat in search of gold but fell on hard times, with the father abandoning them and moving to Fiji. In 1869, his mother returned to Leith, in Scotland, together with Macpherson, his three siblings and another child on the way.

In Scotland, at the age of nine, Macpherson started working to support the family, eventually taking an apprenticeship with the Victoria Confectionery Co. In 1874, the family returned to Australia at the request of his father, then living in the Melbourne working class suburb of Fitzroy. Using skills he acquired in Scotland, in 1878, at the age of 19, Macpherson set up a confectionery manufacturing operation in the bathroom of the family home. He made confectionery on Mondays to Thursdays and sold them around Melbourne on Fridays and Saturdays.

His business quickly grew as Mac Robertson Steam Confectionery Works. By the late 1880s the business employed thirty people. The company created numerous confections including Freddo Frog,[2] Cherry Ripe, Old Gold Chocolates, Milk Kisses and Columbines. By 1900, it had become the largest confectionery works in Australia with agencies in every state. As part of his marketing strategy, Macpherson maintained a distinctive whiteness to everything he could – the buildings in the Fitzroy factory complex were all painted white and all of his several thousand employees wore white uniforms. Macpherson himself ensured he was always seen in public dressed immaculately in white and rode in a carriage behind two white ponies. The factory complex became known as White City.

In 1967 MacRobertson's was acquired by English confectioner Cadbury's which in 1969 merged with Schweppes Australia to become Cadbury Schweppes. On 2 February 2010, Cadbury was purchased by Kraft Foods. Kraft Foods announced they would be splitting into two companies beginning on 1 October 2012. The confectionery business became Mondelez International, of which Cadbury is a subsidiary.

Growth continued through innovative marketing and sponsorships as well as philanthropic donations: