USMC installation that is home to the 3rd Marine Aircraft Wing

The airfield has been named Mitscher Field since 1955, after Admiral M.A. Mitscher, who was the commander of Task Force 58 during World War II.[2] The air station is the former location of Pacific Fleet fighter and Airborne Early Warning and Control aircraft (F-4 Phantom II, F-14 Tomcat, E-2 Hawkeye) and is best known as the former location of the United States Navy Fighter Weapons School (NFWS), its TOPGUN training program and the movie of the same name. In 1996, NFWS was relocated to Naval Air Station Fallon in western Nevada, 60 miles east of Reno and merged into the Naval Strike and Air Warfare Center (NSAWC). During the heyday of TOPGUN at NAS Miramar, the station was nicknamed "Fightertown USA".[3][4] 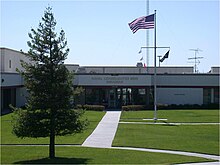 The base contains 23,116 acres (93.55 km2). It is bisected by Kearny Villa Road and Interstate 15. The area east of Kearny Villa Road, called "East Miramar", is undeveloped and is used for military training.[citation needed]

Kumeyaay Native Americans were the first inhabitants in the vicinity of the base. Spain claimed the San Diego area in 1542 and colonized it beginning in 1769. In 1846, the crown issued a land grant that included the area of the current base to Don Santiago Argüello. After the American Civil War, the land was divided and sold to people such as Edward Scripps, a newspaper publisher from the eastern United States, who developed a ranch on the site. It was Scripps who named the area Miramar, meaning "view of the sea".[5] The land was predominantly used for grazing and farming into the early 20th century.

During World War I, the U.S. Army acquired 12,721 acres (5,148 ha) of land in the Miramar Ranch area, on a mesa north of San Diego.[6] Camp Kearny was opened on 18 January 1917 and was named after Stephen W. Kearny, who was commander of the Army of the West during the Mexican–American War. The base was primarily used to train infantrymen on their way to the battlefields of Europe. During World War I, an airstrip was never built on the property, although Army and Navy aircraft from Naval Air Station North Island did land on the parade deck. Following the Armistice, the base was used to demobilize servicemen and was closed on 20 October 1920.[7] More than 1,200 buildings were demolished when the camp closed.

Charles Lindbergh's Spirit of St. Louis airplane was built in nearby San Diego. Lindbergh used the abandoned Camp Kearny parade field to practice landings and take-offs before making his historic solo flight across the Atlantic Ocean.

During the 1930s, the Navy briefly used the air base for helium dirigibles. In 1932, a mooring mast and hangar were built at the camp for the dirigibles, but when the program was abandoned, the base was quiet again.

The big Privateers proved too heavy for the asphalt concrete runway the Army had installed in 1936 and the longer runways built in 1940, so the Navy added two concrete runways in 1943.

During the 1940s, both the Navy and the Marine Corps occupied Miramar. East Miramar (Camp Elliott) was used to train Marine artillery and armored personnel, while Navy and Marine Corps pilots trained on the western side. The bases were combined and designated Marine Corps Air Station Miramar in 1946.[9][10] 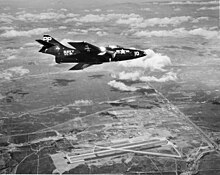 In 1947, the Marines moved to MCAS El Toro in Orange County, California, and Miramar was redesignated as NAAS Miramar (Naval Auxiliary Air Station Miramar). It became NAS Miramar (Naval Air Station Miramar) on 1 March 1952. In 1954, the Navy offered NAS Miramar to San Diego for $1 and the city considered using the base to relocate its airport.[11] But it was deemed at the time to be too far away from most residents and the offer was declined.

Only the western half of Miramar's facilities were put to use; the old east station began to deteriorate, with many buildings sold as scrap. Miramar found new life as a Navy Master Jet Station in the 1950s. The eastern half, former Camp Elliot, was used by the United States Air Force for Project Orion[12] (having been transferred temporarily),[13] and later by NASA;[14] it was the site of several launches.[15] The base really came into its own during the Vietnam War. The Navy needed a school to train pilots in dog-fighting and in fleet air defense. In 1969, the United States Navy Fighter Weapons School was established organizationally as part of VF-121, which was then the F-4 Phantom Fleet Replacement Aviation Maintenance Personnel (FRAMP), which trained the maintainers who joined the fleet as qualified "Phantom Phixeres".

In October 1972, Miramar welcomed the F-14 Tomcat and fighter squadron VF-124, a former Fleet Replacement Squadron (FRS) tasked with the mission to train new Tomcat crews. Formerly, VF-124 had been training pilots in the F-8 Crusader. That task was handed over to Light Photographic Squadron 63 (VFP-63) that then became "Crusader College" The first two operational Tomcat squadrons, VF-1 known as the "Wolfpack" and VF-2 known as the "Bounty Hunters," trained here before deploying aboard USS Enterprise (CVN-65) in 1974.

F/A-18 Hornet on the flight line at MCAS Miramar

In 2005, the BRAC Commission directed instructor pilots and support personnel from Miramar to Eglin AFB in Florida, sufficient to stand up the Marine Corps' portion of the F-35 Lightning II Joint Strike Fighter program (JSF) Training Site.[18] This will lead to an eventual phasing out of Fighter Pilot training at Miramar by 2015 as the F-18s are retired.

In 2006, the San Diego County Proposition A proposed obtaining 3000 acres (12 km2) at MCAS Miramar to develop a commercial airport.[19] The proposition was defeated 62 percent opposed to 38 percent in favor.[20]

Numerous noise complaints have been lodged against MCAS Miramar (and its predecessor, NAS Miramar) going back for decades. MCAS Miramar is located near the center of the City of San Diego. It is surrounded on three sides by residential areas including Mira Mesa, Scripps Ranch, University City, Clairemont, and Tierrasanta. MCAS Miramar has a web site and phone number that people can call to register complaints about noise. To lessen the noise impact to the community, MCAS Miramar has made adjustments to their operations over the years, including the use of hush-houses, limitations on engine run-ups, and modification to flight plans. In spite of efforts, noise complaints remain an issue in 2019.[21][22][23][24][25]

Flying and notable non-flying units based at MCAS Miramar:[26][27]

There have been a number of aviation accidents:

On 30 January 2010, the Department of Veterans Affairs dedicated a new National Cemetery at the northwest corner of MCAS Miramar.[40] The cemetery is an extension of Fort Rosecrans National Cemetery and when complete will accommodate approximately 235,000 deceased veterans and spouses.[41]

This article incorporates public domain material from websites or documents of the United States Marine Corps.