Study of external forms and structures of organisms
This article is about the term in biology. For other uses, see Morphology. 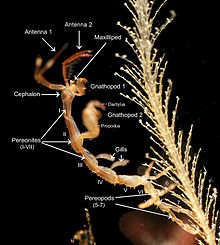 Morphology is a branch of biology dealing with the study of the form and structure of organisms and their specific structural features.[1]

This includes aspects of the outward appearance (shape, structure, colour, pattern, size), i.e. external morphology (or eidonomy), as well as the form and structure of the internal parts like bones and organs, i.e. internal morphology (or anatomy). This is in contrast to physiology, which deals primarily with function. Morphology is a branch of life science dealing with the study of gross structure of an organism or taxon and its component parts.

The etymology of the word "morphology" is from the Ancient Greek μορφή (morphḗ), meaning "form", and λόγος (lógos), meaning "word, study, research".[2][3]

While the concept of form in biology, opposed to function, dates back to Aristotle (see Aristotle's biology), the field of morphology was developed by Johann Wolfgang von Goethe (1790) and independently by the German anatomist and physiologist Karl Friedrich Burdach (1800).[4]

In 1830, Cuvier and E.G.Saint-Hilaire engaged in a famous debate, which is said to exemplify the two major deviations in biological thinking at the time – whether animal structure was due to function or evolution.[7]

Most taxa differ morphologically from other taxa. Typically, closely related taxa differ much less than more distantly related ones, but there are exceptions to this. Cryptic species are species which look very similar, or perhaps even outwardly identical, but are reproductively isolated. Conversely, sometimes unrelated taxa acquire a similar appearance as a result of convergent evolution or even mimicry. In addition, there can be morphological differences within a species, such as in Apoica flavissima where queens are significantly smaller than workers. A further problem with relying on morphological data is that what may appear, morphologically speaking, to be two distinct species, may in fact be shown by DNA analysis to be a single species. The significance of these differences can be examined through the use of allometric engineering in which one or both species are manipulated to phenocopy the other species.

A step relevant to the evaluation of morphology between traits/features within species, includes an assessment of the terms: homology and homoplasy. Homology between features indicate that those features have been derived from a common ancestor.[10] Alternatively, homoplasy between features describes those that can resemble each other, but derive independently via parallel or convergent evolution.[11]

Invention and development of microscopy enable the observation of 3-D cell morphology with both high spatial and temporal resolution. The dynamic processes of these cell morphology which are controlled by a complex system play an important role in varied important biological process, such as immune and invasive responses.[12][13]