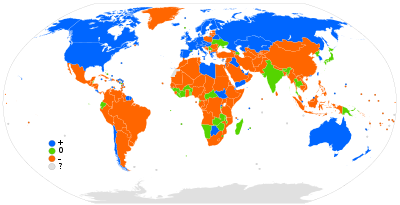 The net migration rate is calculated over a one-year period using the mid year population[2] and a ratio.

Migration occurs over a series of different push and pull factors that revolve around social, political, economical, and environmental factors according to Migration Trends.[3] Social migration is when an individual migrates to have a higher standard of living, to be closer to family, or to live in a nation with which they identify more. Political migration then is when a person is going in as a refugee to escape war or political persecution. This form of migration is also can also be called forced migration. This happens when refugees are moving to neighboring countries or more developed countries. Neighboring countries, especially the ones in the middle east are dependent on to shelter the refugees. Just like the United States, many of the more wealthy countries are now the hosts to many of these refugees.[4] Economical migration is moving to a place where one can aspire to have a career and better job opportunities which end up contributing to better living conditions. Lastly, environmental migration is when natural disasters force you to move into a new area. By analyzing all of the migrating factors you can get to the idea that the net migration rate can say a lot about a country. For example, if there are a lot of people coming in and not many leaving it can be assumed to be a wealthy country that keeps evolving and generating more and more opportunities. On the other hand, if few people are coming in and many are leaving it can be assumed that there is a possibility of violence, low economy, or not enough resources to fulfill the existing population.

I = Number of Immigrants Entering the Area

First, find the mid-year population for country A.

Second, find the net migration for country A, and please keep in mind this is simply the number of immigrants minus the number of emigrants, not the actual rate.

Third, plug your findings into the formula to find the net migration rate for country A.

Net migration has a major key role in every single country. Like mentioned before if a country has a high migration rate is it seen as wealthy and developed. In contrast, a country with a low rate is seen as undeveloped, having political problems, and lacking resources its citizens need. Every country needs a stable number of people going in and out of its territory in order to have a stable economy. If the number of people coming in is greater than the number of people leaving, there will be a greater demand for resources and a tighter yet growing economy. On the other hand, a country with a lower migration rate will most likely lose many of its available resources due to a lack of consumerism and production. Conflicts can arise due to migration, but people can still find it easier than ever to move to a different place. This can be due to more advanced technology and being able to communicate and have more efficient forms of transportation. All of this creates more opportunities which then increases the amount of net migration. The United States is an example of a country with growing opportunities as migration increases.[6] Other occurring problems caused by net migration is a rise in the dependency ratio, higher demand on government resources, and public congestion. A high dependency ratio can be a factor caused by net migration. The dependency ratio can increase as the elder population increases and the fertility rate decreases. This results in a decrease in the labor force and this can hurt a country's economy by causing it to slow down. In order to slow down this process countries have many things, such as increasing the retirement age in order to keep the elderly involved in the workforce as much as possible.[7]