The North Fork Feather River is a watercourse of the northern Sierra Nevada in the U.S. state of California. It flows generally southwards from its headwaters near Lassen Peak to Lake Oroville, a reservoir formed by Oroville Dam in the foothills of the Sierra, where it runs into the Feather River. The river drains about 2,100 square miles (5,400 km2) of the western slope of the Sierras. By discharge, it is the largest tributary of the Feather.

It rises at the confluence of Rice Creek and a smaller unnamed stream in the southern part of the Lassen Volcanic National Park. The river flows east, receiving Warner Creek from the left, and passes the town of Chester. It then empties into Lake Almanor, which is formed by the Canyon Dam. After leaving the dam the river cuts south into a gorge, and turns southwest to receive Butt Creek from the right. The East Branch North Fork Feather River, the North Fork's largest tributary, comes in from the left near Belden, where the river is impounded again at the Rock Creek Dam. It then flows southwards, through several hydroelectric dams, into the north arm of Lake Oroville. 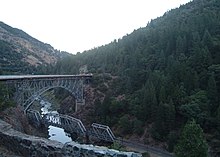 The North Fork Feather Watershed (USGS Huc 18020121)[8] extends from the North Fork headwaters south-southwest to the Lower Feather Watershed.[9] The headwaters are in the Shasta Cascades and the northern Sierras along the Pit River and Eagle-Honey watersheds. The drainage divide for the headwaters begins in Shasta County at the Lassen Peak quadruple watershed point of East Sulpher Creek (Mill-Big Chico), Manzanita Creek (Upper Cow-Battle watershed), Lost Creek (Lower Pit River), and Kings Creek (North Fork Feather). The headwater divide extends in an arc east to Lassen County, then to the Great Basin Divide triple point of the Feather, Pit, and Susan Rivers. The divide arcs southeast to Pegleg Mountain and along 13 mi (21 km) of the Sierra Crest to the triple point with the East Branch North Fork Feather River on the east slope of Indicator Peak (40°00′43″N 120°11′15″W﻿ / ﻿40.012069°N 120.187554°W﻿ / 40.012069; -120.187554).

For a list of Sierra Nevada (U.S.) headwater creeks that drain to the North Fork, see Sierra Crest.

The lowest elevations of the North Fork Feather Watershed are in Butte County, with the emergency weir crest at 901 ft (275 m) and, at average storage capacity, the Lake Oroville level of 812 ft (247 m) .[10]