The name "oak" comes from the abundance of oak trees, while the suffix "-ley" comes from the Old English word for "field" or "meadow". The name Oakley is of Old English origin and its meaning is "meadow of oak trees". This aptly describes the area when first settled and to some extent even today. However, if not for the flip of a coin and cribbage board the community may have been named Dewey. City founder Randolph Marsh wanted to name the city Dewey, after Admiral Dewey, in honor of Dewey's success at Battle of Manila Bay during the Spanish–American War. His friend J.T. Whightman preferred the name "Oakley" because the terrain was largely meadows and oaks. To determine which name would prevail they battled it out over a game of cribbage. Marsh may have lost the game and the right to name the city but he ensured his immortality by choosing downtown street names whose first initials spelled "Marsh" — Main, Acme, Ruby, Star and Home.
[8] 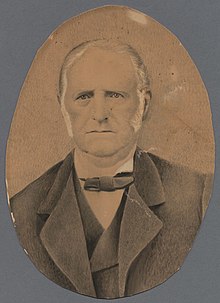 Archeologists have found prehistoric sites in the Oakley area. One substantial shell mound was discovered early in the 20th century near what is now the eastern edge of town. The Northwest Information Center of the California Historical Resources Information System monitors the archeological investigations undertaken in Oakley. Around three dozen such projects have been completed in the past 25 years, yielding only four prehistoric sites in the city. However, the information center believes there is a high possibility that other prehistoric sites remain within the city. To enable further archaeological excavation, the site referred to as Simon Mound was purchased by the Archaeological Conservancy after many of the ancient settlement places had already been destroyed by urban encroachment. Simone Mound has provided bones and fragments from burial sites starting around 1000 A.D. and is near a similar Conservancy preserve, the Hotchkiss Mound.[9]

The first accounts of identifiable cultural community in the west delta are attributed to the Bay Miwoks, who occupied the region between 1100 and 1770 AD. The Bay Miwok people, usually called the Julpunes or Pulpunes by European explorers, were organized into "tribelets"—political units that included several fairly permanent villages and a set of seasonal campsites arrayed across a well-defined territory.

Incursions of the Spanish Empire into the Oakley area began in the 1770s. The first group to enter the present-day city limits was the De Anza expedition of 1775–76. However, after a failed attempt to find a route through the tule swamps to the Sierra, the De Anza expedition returned to Monterey. Subsequent expeditions by the Spanish did not result in colonization. Europeans settled in the Delta in the 19th century, but were killed by malaria and smallpox.[citation needed]

Oakley's western border is California State Route 160. The City of Antioch adjoins Oakley on the west, the city of Brentwood adjoins Oakley on the south, and Bethel Island lies to the east. The Sacramento-San Joaquin Delta forms the northern boundary. The southwestern skyline is dominated by Mt. Diablo.

The City of Oakley is a general-law city, as opposed to a charter city, formed under state legislative statutes and governed by a body of laws in the state Constitution. Oakley operates under a council-manager form of government.[citation needed]

The Oakley City Council consists of five non-partisan council members elected "at large". Oakley's city council members are considered part-time because, aside from being council members, they have full-time jobs. This part-time nature of the council opens up opportunities for ordinary citizens who are working in the private sector to participate.[citation needed]

At the first council meeting in December, the mayor is selected by a majority of the city council from among currently serving council members. At this time a vice mayor is also selected.

Oakley has had vineyards since the late 1800s. Early Portuguese and Italian immigrants found the climate amenable and planted thousands of acres of vineyards.

Nearly 80 percent of Oakley's roughly 700 acres (2.8 km2) of vineyards are planted in Zinfandel. Oakley's grape harvest can conservatively be estimated at about 2,000 tons. These grapes are distributed to a number of local wineries.[citation needed]

Oakley is part of the East Contra Costa Bicycle Plan, which has existing facilities in Oakley as well as plans for further expansion.[15]

After lengthy negotiations between the County and the cities of Oakley and Brentwood governance of the ECCFPD was turned over to a new governing board in February 2010.

There were 7,832 households, out of which 52.0% had children under the age of 18 living with them, 68.2% were married couples living together, 9.1% had a female householder with no husband present, and 17.5% were non-families. 13.0% of all households were made up of individuals, and 4.1% had someone living alone who was 65 years of age or older. The average household size was 3.26 and the average family size was 3.56.

The Oakley branch of the Contra Costa County Library system is located in Oakley.[19]