Orange was originally incorporated as a township by an act of the New Jersey Legislature on November 27, 1806, from portions of Newark Township. Portions of the township were taken on April 14, 1834, to form the now-defunct Clinton Township. On January 31, 1860, Orange was reincorporated as a town. Portions of the town were taken to form South Orange Township (April 1, 1861, now known as Maplewood), Fairmount (March 11, 1862, now part of West Orange), East Orange Township (March 4, 1863) and West Orange Township (April 10, 1863). On April 3, 1872, Orange was reincorporated as a city.[21] In 1982, the city was one of four Essex County municipalities to pass a referendum to become a township, joining 11 municipalities that had already made the change, of what would ultimately be more than a dozen Essex County municipalities to reclassify themselves as townships in order take advantage of federal revenue sharing policies that allocated townships a greater share of government aid to municipalities on a per capita basis.[22][23][24][25][26] The city derives its name from William III of England[27] or William IV, Prince of Orange.[28]

Despite the differences in the character of the municipalities, Orange is often joined with neighboring East Orange, South Orange and West Orange and referred to as part of "the Oranges".[29]

Orange had its origins in Connecticut's New Haven Colony. In 1666, a group of 30 of New Haven's families traveled by water to found "a town on the Passayak" River. They arrived on territory now encompassing Newark, the Oranges, and several other municipalities. The area was situated in the northeast portion of a land grant conveyed by King Charles II of England to his brother James, Duke of York. In 1664, James conveyed the land to two proprietors, Lord John Berkeley and Sir George Carteret. Since Carteret had been Royal Governor of the Isle of Jersey, the territory became known as "New Jersey."

Orange was initially a part of the city of Newark, but it was originally known as "Newark Mountains". On June 7, 1780, the townspeople of Newark Mountains officially voted to adopt the name Orange.[31] At the time, there was a significant number of people in favor of secession from Newark. However, this would not occur until November 27, 1806, when the territory now encompassing all of the Oranges was finally detached. On April 13, 1807, the first government was elected, but not until March 13, 1860 was Orange officially incorporated as a city. Immediately, the new city began fragmenting into smaller communities, primarily because of local disputes about the costs of establishing paid police, fire, and street departments. South Orange was organized on January 26, 1861; Fairmount (later to become part of West Orange) on March 11, 1862; East Orange on March 4, 1863; and West Orange (including Fairmount) on March 14, 1863.[21]

Orange is located on the Newark and Mount-Pleasant Turnpike, the main road from Newark to Morristown, and ultimately to Easton, Pennsylvania. The town became a busy thoroughfare for travelers, and hotels abounded. Initially, the stagecoach was the primary method of transportation. Omnibuses of the Eclipse and the Morris & Newark Lines serviced Orange. The Morris and Essex Railroad arrived in Orange in November 1836, its first cars drawn by horses. On October 2, 1837, the first steam locomotive appeared, and the horses were, with minor exception, relegated to pasture. The "M&E" later became a part of the Delaware, Lackawanna and Western Railroad (DL&W), which exists today as NJ Transit's Morristown Line. Trolley cars appeared much later, with the Orange and Newark Horse Car Railroad Company running its first car up Main Street in May 1862. The Orange Crosstown Line, eventually extending from Morris Street, Orange, to Bloomfield, was started in June 1888. (The first electric trolley in the State of New Jersey operated over a section of this line.) Eventually, all of the trolleys, and the buses that replaced them, became part of the sprawling Public Service Coordinated Transport System.

Orange became an industrial city early in its history, with the tanning industry expanding rapidly after settlers found growths of hemlock trees that would be a source for the tannic acid they needed, leading to the growth of many factories producing shoes and boots.[26]https 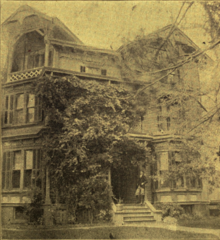 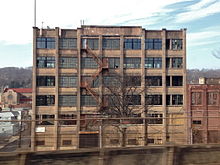 Orange was once the hatmaking capital of the United States. The industry can be traced there to 1792. By 1892, 21 firms were engaged in that trade, employing over 3,700 people in plants that produced about 4.8 million hats, which had a combined value in excess of $1 million. Several brothers founded the "No-Name Hat Company" in Orange before one of them moved on to make fedoras in Philadelphia under the family name, "Stetson." By 1921, however, only five hatmaking firms were left, many having departed for places such as Norwalk and Danbury, Connecticut.[32] By 1960, all had left.

Beer was a major industry in Orange beginning in the early 1900s, when the three Winter Brothers of Pittsburgh, Pennsylvania, arrived in the city and built the first brewery. The Orange Brewery was constructed in 1901 at a reported cost of $350,000. The production of beer ceased with prohibition in 1920, and after the repeal of the Volstead Act in 1933, the brewery was sold to John F. Trommers of Philadelphia. Trommers brewed beer under that label until 1950, when the concern was again sold to Liebmann Breweries, Incorporated, which bottled Rheingold Beer. Eventually, after several additional owners, the plant was closed permanently in 1977.

Other notable firms located in Orange were the Monroe Calculating Company, manufacturers of the patented adding machines of the same name, and the Bates Manufacturing Company, producers of office accessories such as staplers and stampers. The United States Radium Corporation was a notorious resident of Orange. This firm refined ore and extracted the radium used to make luminous paint for dials and hands of watches and other indicators. It was only years later that the terrible carcinogenic effects of this material became known, and the polluted site of the factory became a thorn in the side of the city.[33]

Orange has produced such notables as baseball's Monte Irvin and heavyweight boxer Tony Galento. Actor William Bendix lived and worked here for a short while. Presidents, presidential candidates, and governors visited. Orange held major celebrations for its 100th anniversary, and another when it turned 150.

Once a multi-ethnic, economically diverse city, Orange suffered indirectly from the 1967 riots in Newark (even though Newark and Orange do not share a border) and directly from the construction of Interstate 280 through the heart of the downtown area, triggering middle-class "white flight" from aging industrial towns to the new automobile suburbs being built in western Essex County and elsewhere.[34][35] By the end of the 1970s, Orange had many of the urban ills normally associated with larger cities. However, the city still features many tree-lined streets with well-maintained homes.

In 1982, citizens voted overwhelmingly to change the designation of Orange from a city to a township, thereby making it eligible for federal Revenue Sharing funds.[26] In 1985, the State of New Jersey named Orange as a State Urban Enterprise Zone, creating tax breaks and investment incentives.[26]

The East Branch of the Rahway River travels through Orange.[36]

As part of the 2000 Census, 75.10% of Orange's residents identified themselves as being African American, one of the highest percentages of African American people in the United States, and the fourth-highest in New Jersey (behind Lawnside at 93.60%, East Orange at 89.46%, and Irvington at 81.66%) of all places with 1,000 or more residents identifying their ancestry.[54]

Orange has a large Haitian American population, with 11.4% of residents identifying themselves as being of Haitian ancestry, the highest of any municipality in New Jersey and the eighth-highest in the United States.[55]

Although still a small percentage of total residents, Orange and East Orange have the largest concentrations of Guyanese Americans in the country. In the 2000 Census, 2.9% of Orange residents identified as being of Guyanese ancestry. While Queens and Brooklyn had larger populations in terms of raw numbers, Orange and East Orange (with 2.5%) had the highest percentages of people of Guyanese ancestry as a portion of the total population of all places in the United States.[56] 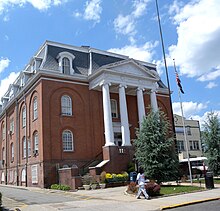 Orange is governed within the Faulkner Act, formally known as the Optional Municipal Charter Law, under the Mayor-Council form of municipal government. The city is one of 71 of 565 municipalities statewide that use this form of government.[57] The governing body is comprised of the directly elected mayor and the seven-member City Council. There are four ward representatives on the city council and three at-large representatives. Councilmembers are elected to serve four-year terms of office in non-partisan elections on a staggered basis with the three at-large seats and the mayor up for election together and the four ward seats up together on an alternating cycle in even-numbered years as part of the May municipal election.[7]

For the 2022–2023 session, the 34th Legislative District of the New Jersey Legislature is represented in the State Senate by Nia Gill (D, Montclair) and in the General Assembly by Thomas P. Giblin (D, Montclair) and Britnee Timberlake (D, East Orange).[71]

The City of Orange is served by the professional firefighters of the city of Orange Fire Department (OFD). Founded in 1872, the OFD operates out of two fire stations, located at 419 Central Avenue and 257 Washington Street. The firefighting apparatus consists of two fire engines, two quints and a ladder truck.[100]

The Orange Board of Education serves public school students in pre-kindergarten through twelfth grade.[101] The district is one of 31 former Abbott districts statewide that were established pursuant to the decision by the New Jersey Supreme Court in Abbott v. Burke[102] which are now referred to as "SDA Districts" based on the requirement for the state to cover all costs for school building and renovation projects in these districts under the supervision of the New Jersey Schools Development Authority.[103][104] 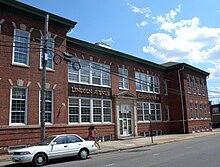 Portions of the city are part of an Urban Enterprise Zone (UEZ), one of 32 zones covering 37 municipalities statewide. Orange was selected in 1983 as one of the initial group of 10 zones chosen to participate in the program.[128] In addition to other benefits to encourage employment and investment within the Zone, shoppers can take advantage of a reduced 3.3125% sales tax rate (half of the 6+5⁄8% rate charged statewide) at eligible merchants.[129] Established in November 1992, the city's Urban Enterprise Zone status expires in November 2023.[130]

I-280 westbound in Orange

Interstate 280 is the most significant highway serving the city, traversing along an east-west alignment from the border with West Orange to the East Orange city line.[132] The only other significant roadway serving Orange is County Route 508, which follows Central Avenue.

The Orange[133] and Highland Avenue[134] stations provide NJ Transit train service along the Morris & Essex Lines (formerly Erie Lackawanna Railway). Service is available via the Kearny Connection to Secaucus Junction and Penn Station in Midtown Manhattan and to Hoboken Terminal. Passengers can transfer at Newark Broad Street or Summit station to reach the other destination if necessary.[135]

People who were born in, residents of, or otherwise closely associated with Orange include: