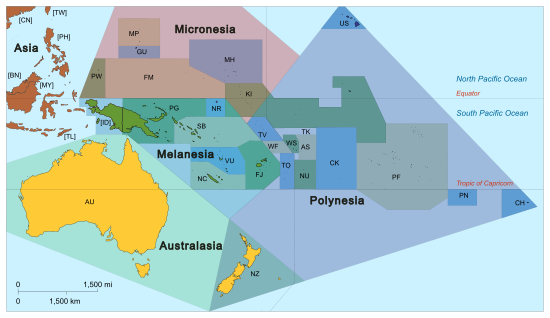 Pacific Islanders originate from countries within the Oceanic regions of Polynesia, Melanesia, and Micronesia.

Pacific Islanders, Pacificer, Pasifika, or Pasefika, are the peoples of the Pacific Islands—particularly those who are indigenous to them.[1]

As an ethnic/racial term, it is used to describe the original peoples—inhabitants and diaspora—of any of the three major subregions of Oceania (Melanesia, Micronesia, and Polynesia). It is also sometimes used as a general geographic term, describing any inhabitants of the Pacific islands (i.e., including citizens of Pacific states/territories who are of Asian or European descent and who call the Pacific their home). As "Pacific Islander" can be understood to denote both indigenous and non-indigenous peoples of the Pacific Islands, as well as excluding Aboriginal Australians, the term is distinct from referring to the indigenous peoples of Oceania.

Auckland, New Zealand has the world's largest concentration of urban Pacific Islanders living outside of their own countries, and is sometimes referred to as the "Polynesian capital of the world."[2] This came as result of how, during the 20th century and into the 21st century, the country saw a steady stream of immigration from Polynesian countries such as Samoa, Tonga, the Cook Islands, Niue, and French Polynesia.[2]

Melanesia is the great arc of islands located north and east of Australia and south of the Equator. The name derives the Greek words melas ('black') and nēsos ('island') for the predominantly dark-skinned peoples of New Guinea island, the Bismarck Archipelago, Solomon Islands, Vanuatu (formerly New Hebrides), New Caledonia, and Fiji.[3]

Micronesia includes Kiribati, Nauru, the Marianas (Guam and the Commonwealth of the Northern Mariana Islands), the Republic of the Marshall Islands, Palau, and the Federated States of Micronesia (Yap, Chuuk, Pohnpei, and Kosrae, all in the Caroline Islands).

The Polynesian islands are scattered across a triangle covering the east-central region of the Pacific Ocean. The triangle is bound by the Hawaiian Islands in the north, New Zealand in the west, and Easter Island in the east. The rest of Polynesia includes the Samoan islands (American Samoa and Samoa [formerly Western Samoa]); Cook Islands; French Polynesia (the Society Islands [Tahiti], Marquesas Islands, Austral Islands, and Tuamotu); Niue Island; Tokelau and Tuvalu; Tonga; Wallis and Futuna; Rotuma Island; Pitcairn Island; Nukuoro; and Kapingamarangi.[3]

The population of the Pacific Islands is concentrated in Papua New Guinea, New Zealand (which has a majority of people of European descent), Hawaii, Fiji, and Solomon Islands. Most Pacific Islands are densely populated, and habitation tends to be concentrated along the coasts.[3]

Melanesians constitute over three quarters of the total indigenous population of the Pacific Islands; Polynesians account for more than one-sixth; and Micronesians make up about one-twentieth.[3]

Several hundred distinct languages are spoken in the Pacific Islands. In ethnolinguistic terms, those Pacific islanders who reside in Oceania are divided into two different ethnic classifications:[3]

The umbrella term Pacific Islands may take on several meanings.[5] Sometimes it refers to only those islands covered by the region of Oceania.[6][7] In some common uses, the term refers to the islands of the Pacific Ocean once colonized by the Portuguese, Spaniards, Dutch, British, French, United States, and Japanese, such as the Pitcairn Islands, Taiwan, and Borneo.[8] In other uses, it may refer to islands with Austronesian linguistic heritage like Taiwan, Indonesia, Micronesia, Polynesia, Myanmar islands, which found their genesis in the Neolithic cultures of the island of Taiwan.[9]

In Australia, the term South Sea Islander was used to describe Australian descendants of people from the over-80 islands in the western Pacific who had been brought to Australia to work on the sugar fields of Queensland—these people were called Kanakas in the 19th century.[10]

"Pacific Island Labourer" includes all natives not of European extraction of any island except the islands of New Zealand situated in the Pacific Ocean beyond the Commonwealth [of Australia] as constituted at the commencement of this Act.[11]

In 2008, a "Pacific Seasonal Worker Pilot Scheme" was announced as a three-year pilot experiment.[12] It provides visas for workers from Kiribati, Tonga, Vanuatu, and Papua New Guinea to work in Australia.[13] Aside from Papua New Guinea, the scheme includes one country each from Melanesia (Vanuatu), Polynesia (Tonga), and Micronesia (Kiribati)—countries that already send workers to New Zealand under its seasonal labour scheme.[14][15]

Local usage in New Zealand uses Pacific islander (formerly Pacific Polynesians,[16] or Pasifika) to distinguish those who have emigrated from one of these areas in modern times from the New Zealand Māori, who are also Polynesian but are indigenous to New Zealand.[16]

In the 2013 New Zealand census, 7.4% of the New Zealand population identified with one or more Pacific ethnic groups, although 62.3% of these were born in New Zealand.[17] Those with a Samoan background make up the largest proportion, followed by Cook Islands Māori, Tongan, and Niuean.[17] Some smaller island populations such as Niue and Tokelau have the majority of their nationals living in New Zealand.[18]

To celebrate the diverse Pacific island cultures, the Auckland Region hosts several Pacific island festivals. Two of the major ones are Polyfest, which showcases performances of the secondary school cultural groups in the region,[19] and Pasifika, a festival that celebrates Pacific island heritage through traditional food, music, dance, and entertainment.[20]

By the 1980s, the United States Census Bureau grouped persons of Asian ancestry and created the category "Asian-Pacific Islander," which continued in the 1990s census. In 2000, "Asian" and "Pacific Islander" became two separate racial categories.[21]

According to the Census Bureau's Population Estimates Program (PEP), a "Native Hawaiian and Other Pacific Islander" is,

A person having origins in any of the original peoples of Hawaii, Guam, Samoa, or other Pacific islands. It includes people who indicate their race as 'Native Hawaiian', 'Guamanian or Chamorro', 'Samoan', and 'Other Pacific Islander' or provide other detailed Pacific Islander responses.[22]

According to the Office of Management and Budget, "Native Hawaiian or Other Pacific Islander" refers to a person having origins in any of the original peoples of Hawaii, Guam, Samoa, or other Pacific Islands.[21]

Eight out of 10 Pacific Islanders in the United States are native to the United States. Polynesians make up the largest group, including Native Hawaiians, Samoans, Tahitians, and Tongans. Micronesians make up the second largest, including primarily Chamoru from Guam; as well as other Chamoru, Carolinian from the Northern Mariana Islands, Marshallese, Palauans, and various others. Among Melanesians, Fijian Americans are the largest in this group.[23]

There are at least 39 different Pacific Island languages spoken as a second language in the American home.[23]