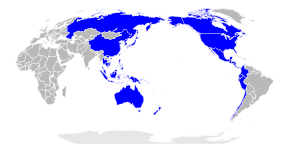 This is a list of countries that are generally considered to be a part of the Pacific Rim, since they lie along the Pacific Ocean.[2] Arranging from north to south, west to east in directional order.

The Pacific has much international shipping. The top 10 busiest container ports, with the exception of Dubai's Port of Jebel Ali (9th), are in the Rim nations. They are home to 29 of the world's 50 busiest container shipping ports:

Various intergovernmental and non-governmental organizations focus on the Pacific Rim, including APEC, the East-West Center, Sustainable Pacific Rim Cities,[4] the Pacific Basin Institute, and the Institute of Asian Research. In addition, the RIMPAC naval exercises are coordinated by United States Pacific Command.