For the mountain range on this peninsula, see Palos Verdes Hills.
Sub-region of the Los Angeles metropolitan area in California

The hill cities on the peninsula are known for dramatic ocean and city views, distinguished schools,[1] extensive horse trails,[2] and high value homes.[3] 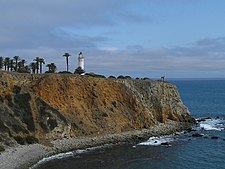 The Point Vicente Lighthouse on the Palos Verdes Peninsula and the National Register of Historic Places.

The peninsula was the homeland of the Tongva-Gabrieliño Native Americans people for thousands of years. In other areas of the Los Angeles Basin archeological sites date back 8,000 years.[4][5] Their first contact with Europeans occurred in 1542 with João Cabrilho (Juan Cabrillo). Chowigna and Suangna were two Tongva settlements of many in the peninsula area, which was also a departure point for their rancherías on the Channel Islands. 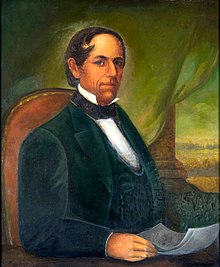 Don Manuel Domínguez, a signer of the Californian Constitution and owner of Rancho San Pedro, which included all of Palos Verdes until 1846. 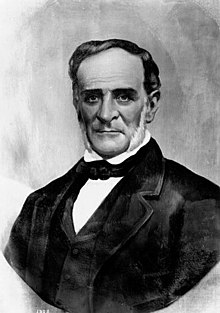 In 1846, José Dolores Sepúlveda and José Loreto received a Mexican land grant from Alta California Governor Pío Pico for a parcel from the huge original 1784 Spanish land grant of Rancho San Pedro to Manuel Dominguez.[6] It was named Rancho de los Palos Verdes, or "ranch of the green sticks", which was used primarily as a cattle ranch.[7] It was also briefly used as a whaling station in the mid-19th century.

By 1882, ownership of the land had passed from the Sepulveda family through various mortgage holders to Jotham Bixby of Rancho Los Cerritos, who leased the land to Japanese farmers.[8]

Frank Vanderlip, representing a group of wealthy east coast investors, purchased 25 square miles of land on the Palos Verdes Peninsula in 1913 for $1.5 million.[9] In 1914, Vanderlip vacationed at Palos Verdes in order to recover from an illness, and he was astounded by scenery he compared to "the Sorrentine Peninsula and the Amalfi Drive." He quickly initiated development of Palos Verdes. He hired the Olmsted Brothers, the landscaping firm of John Charles Olmsted and Frederick Law Olmsted Jr., to plan and landscape a new subdivision.[10] The Olmsted Brothers contracted Koebig & Koebig to perform engineering work, including surveying and road planning.[11] However, the project stalled as World War I started, and Vanderlip accepted a chairmanship to the War Savings Committee in Washington, D.C. in 1916.

By 1921, Vanderlip had lost interest in overseeing development of Palos Verdes and enticed Edward Gardner Lewis to take over the project with an option to buy the property for $5 million. Lewis was an experienced developer, but lacked the capital to purchase and develop Palos Verdes. Instead, he established a real estate trust, capitalizing the project through the sale of notes which were convertible to Palos Verdes property. Under the terms of the trust, Lewis sought to raise $30 million for infrastructure improvements, effectively borrowing from investors for both the land and the improvements. He succeeded in attracting $15 million in capital, but far short of the $35 million needed. The trust dissolved and ownership of Palos Verdes reverted to Vanderlip.[12]

Vanderlip established a new real estate trust to purchase 3,200 acres from his land syndicate and establish the subdivision of Palos Verdes Estates. The new trust assumed not just the land, but also the improvements made by Lewis. They were not complete, but they were substantial: improvements included many sewers, water mains, and roads; landscaping, parks, and a golf course. They opened Palos Verdes for public inspection in June 1923.[13]

Palos Verdes Estates was organized and landscaped by the Olmsted Brothers and in their planning, they dedicated a quarter of the land area to permanent open undeveloped space.[14]

The largest peninsula commercial district is in Rolling Hills Estates, with many shopping centers including The Promenade on the Peninsula with a megaplex movie theater and an ice rink.

In this night-time aerial photograph of Los Angeles, San Pedro is in the center and right foreground, including part of the brightly lit Terminal Island. The dark peninsula to the left of San Pedro is Palos Verdes.

The edge of the Palos Verdes Peninsula extending down to the Pacific Ocean.

The Peninsula is served by the Palos Verdes Library District, which operates these three libraries:

The 40 Families Project based at Peninsula Center Library documents the history of the Japanese-American community on Palos Verdes before World War II.[20]

Aerial view of Marineland of the Pacific, in 1965, on the Palos Verdes Peninsula.

The peninsula is frequented by runners, hikers, horseback riders, bird watchers, surfers, scuba divers, fishermen, and bicyclists. The area is home to several golf courses and country clubs. In addition, nude sunbathers formerly frequented Sacreds Cove (or "Smugglers Cove") until the city of Rancho Palos Verdes enacted a 1994 ordinance that ended such use of that beach.

The infamous Palos Verdes surf spots have been in the spotlight many times over issues of localism. The most notorious surf spot for localism in Palos Verdes is Lunada Bay, which can hold any winter swell and has been known to rival Sunset Beach, Hawaii on a big day. Localism in Palos Verdes reached a turning point in 2001 when a civil rights lawsuit was filed after a particularly violent confrontation with Hermosa Beach surfers.[23] Surveillance cameras were placed in the surfing area but were later removed.[24] In 2016, The Coastal Commission targeted the group after "renewed reports that their unpermitted structure [built along Lunada Bay] was being used as a spot for ongoing bullying and intimidation." On July 12, 2016, City Manager Tony Dahlerbruch recommended the removal of the illegal structure after pressure from the California Coastal Commission.[25]

The Trump National Golf Club is a Donald Trump venture with a golf course on the Ocean Trails cliffs. The 18th hole of the prior golf course fell victim to a landslide caused by a leak in the sanitary pipes underneath it. In the summer of 2006, the golf club erected a 70-foot flagpole for an American flag; critics claimed it was illegal, but the golf club was allowed to retain it after a City Council vote.[26]

The Marineland of the Pacific site near Portuguese Bend is currently home of Terranea, a luxury oceanfront resort.[27]

There are numerous nature reserves in Palos Verdes: Palos Verdes Estates Shoreline Preserve, Agua Amarga Reserve, and Portuguese Bend Reserve. The reserves contain coastal sage scrubs habitats, a community of fragrant and drought resistant shrubs and flowering plants. In August 2009, wildfire burned approximately 165-acres of the Portuguese Bend Reserve. As a result, restoration has been done to reinstall native plants and animals to the area.[28] 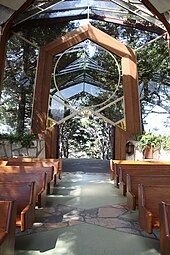 Interior of the Wayfarers Chapel.

According to the Köppen Climate Classification system, Palos Verdes has a Mediterranean climate, abbreviated "Csa" on climate maps.[33]